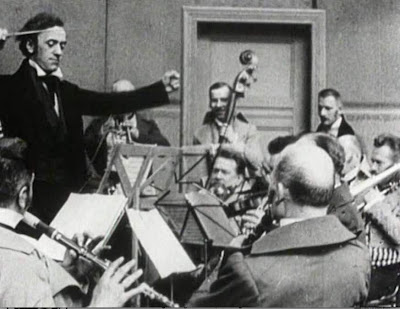 Is that Richard Wagner conducting? "Silent Wagner" is a remastering of a 1913 film made to celebrate Wagner's centenary.

A hundred years on, it's even more fascinating because the actor, Guiseppe Becce, is a dead ringer for Wagner himself. He's short and scrawny but moves with nervous energy. Perhaps Wagner, who had massive chips on his shoulders, moved with that punchy combativeness. In the scenes where Becce's Wagner squares up to the enormously tall Ludwig II (Ernst Reicher) we can sense something of the unspoken personal dynamic between them. Wagner's a chancer, getting his own at the aristocratic Big Guy. No historian can ever quite suggest this, but Becce has the intuition of a true method actor.

Becce (1877-1973) was also a musician and composer, who worked with  Arthur Nikisch and Ferruccio Busoni. He was a big name in German cinema. Before sound, he conducted live orchestras  who played during screenings. He was involved with The Cabinet of Dr Caligari (1920). For the Wagner biopic, he wrote an original score. When sound movies came in, Becce did very well. He wrote and conducted the music for Pabst's Geheimnisse der Seele, Reifenstahl Das blaue Licht, Ekstase, numerous classic Bergfilme. Becce was extremely important in the evolution of German cinema. It's unfair that the remastering calls the film "Silent Wagner" because it obliterates Becce's contribution. He must have written the music with wry humour: scenes from the operas pop up throughout the film with hilarious effect.

The script's a bit dodgy, lingering too long on Wagner's youth, leaving the Cosima years to the last 20 minutes. Cosima was alive and still truculent when the film was made, so perhaps the director, Carl Froelich (a huge presence in later in German cinema), was diplomatic to shy away from detail. "Cosima" appears in  brief shot, holding a suitcase, gesturing that she's come to serve her Master. Minna is excoriated. "Wagner" throws her out, suggesting that he was single before he met Cosima. All we see of their relationship is a flashback to a shot of Siegfried awakening Brünnhilde on her rock. Somehow I don't think Wagner would have exclaimed "Das ist keine Mnn !" This film is more tongue in cheek than meets the untutored eye. Ooops, wrong choice of metaphors.

But the period detail is breath-taking. Elaboate sets, suggesting how over-stuffed and claustrophobic period interiors might have been.  There are scenes with tiny, cramped theatres. The actors move stiffly in "actorly" poses. Yet even this tells us something. Was Wagner moving away from the stylized kitsch of the past? Cosima would not have liked that. Nor would she have liked seeing Meyerbeer who appears, tall and confident. Cosima would, however, have liked the scene where she's presented to Ludwig II surrounded by children who have mysteriously appeared. The boy who plays Siegfried Wagner sports a blond bouffant - must be a wig!

The composer sits at his desk, or plays a lumpy antique piano. "Ghosts" appear : Beckmesser, Eva and then Hans Sachs. Presto! Opera complete! Ludwig II visits Wagner in Switzerland, arriving in a boat, preceded by a swan. Wagner reads his Nibelung poems to polite Swiss burghers. Mathilde Wesendonck falls decorously for the artist, with a chaste kiss. Getting a shot of Bayreuth must have been easy enough, but the film uses state of the art technology (for 1913) to show Wagner on his deathbed in Venice. He's visited by apparaitions : Parsifal, Brünnhilde, Sachs, Walter with his harp. If this film is approached in modern cinematic terms, it's hard  to take. But appreciate it for its wry insights and provocative humour, and delight in the way it revises the Wagner story. There';s a scene where Becce plays Wagner in a bathtub, which is fair enough. But the film lingers lovingly on his naked body, discreetly lit from behind a screen.  When he emerges the towel he's wearing keeps threatening to slip off. That's a clue that this isn't reverent hommage, but "Wagner revealed".

It's also important as a record of the evolution of German film, given that those who made it were to become leading figures in the business. And it also suggests the links between opera and film. Cinema was another form of "high art", treated with respect.