Siegfried not Wagner but Lang

To get us in the mood for Wagner Siegfried with Barenboim, Prom 18 tonight, Fritz Lang's Siegfried from 1924, four years before he made Metropolis.(read more about that HERE). "Farewell, Siegfried, son of King Siegmund, you will never get to Worms!" 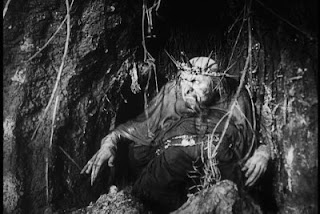 This Siegfried is a golden prince who for some reason lives under a World Ash tree on good terms with a community of trolls. They're quite endearing. When they walk they stomp. legs wide apart.  One guts fish while three childlike trolls (ugly Rhinemaidens?) scamper about.  Siegfried forges a powerful sword. "Siegfried, son of King Siegmund", says Mime,"ride home to Xanten. Even I cannot teach you any more!"  In the woods, Siegfried meets an amazingly realistic reptile, constructed in an era when special effects weren't done by computer, but made by hand, and moved by machines. Fantastic scene! A less convincing mechanical bird tells Siegfried to bathe in the dragon's blood to become invincible..He gets the "Wonder Cap"  from Alberich and steals the Nibelungen Treasures. 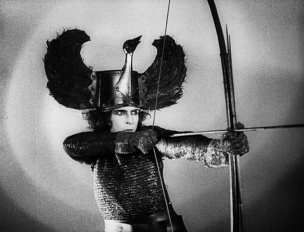 Siegfried, now with 12 Knights of his own, arrives in Worms, where King Gunther of Burgundy and his sister Kriemhilde reside in stylized art deco medievalism.Study the sequences, they're a visual delight. Hagen, who wears a magnificent winged cap, tells Gunther to fetch Brunhild, Queen of The Northlands. She lives in a castle surrounded by flames with a regiment of amazons. Defeated in a tournament she is taken back to Worms. More spectacular art deco designs!  "Traditional" costumes were never as audacious as these. The set is immense, allowing dramatic panorama shots, not easy to achieve with early camera technology. This is medievalism as modernity, done with great style. Please read what I wrote about Fritz Lang's four hour Die Nibelungen saga HERE .