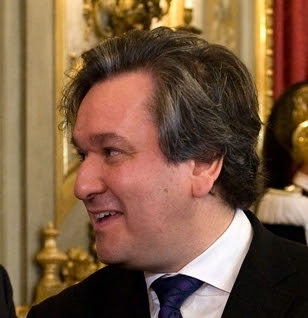 Antonio Pappano's Viva Verdi! Prom 12 gave Verdi's non-operatic work the attention it deserves. It was much more stimulating than yet another opera, which we can hear any time. The Quatro Pezzi Sacrae (Four Sacred Pieces) are a special occasion. The Accademia Nazionale di Santa Cecilia, Rome (Academy of St Cecilia) always brings out the best in him. Pappano is the kind of guy who gets  excited about his enthusiasms, but the Accademia seem to share his passions. They share the same sense of adventure and stylish panache. There's a lot to be said for orchestras that don't play the same blockbusters all the time. And, dare I say it, they're Italian. Style is in their genes.

Verdi wasn't pious. But he knew the role of religion in Italian culture, and what the Virgin Mary might symbolize. Church and Theatre aren't really so very different in Catholic Italy where pageantry and display are an inextricable part of the liturgy. The Chorus of the Accademia sang the Ave Maria with panache.While the piece (which dates from 1889) might seem conventionally reverent one wonders if it's really Church music at all. The lines move with sensuous grace, and the singers intone "Maria!" letting the vowels elide.

With the Stabat Mater (1896) we hear Verdi in more characteristic mode. . Dramatic opening chords that dissipate in beautiful descending lines,  pulled forward by surging dark strings. Suddenly the tempo changes. Trumpets sound. A dizzying climax. Then, instead of action, Verdi gives us contemplative pianissimo. The trombones call. One hears "footsteps" in the music, visualizing a large ensemble on stage, moving en bloc. Flutes flutter upwards. Bassoons, celli and low strings suggest downward movement. Christ's soul rises to the heavens, while his body hangs limp on the Cross.
Exquisitely luminous singing from the ladies of the Accademia chorus for the Laudi alla Vergine. Glossy textures, but strong underlying form.

The Te Deum, though was the highlight. The male voices sang quietly, then orchestra and choirs exploded in a blaze of glory, which Pappano tightly reined in. He showed how Verdi builds up the excitement to bursting point.  Quiet reverential passages suggested anticipation, alternating with moments of expressive relief. Trombones cried out, and the chorus sang "Tu Rex gloriae, Christe."  A soprano sang out triumphantly. Then at last the tension was released in an ecstatic explosion of glory The moment is brief and unsentimental. Verdi has made his point.

Verdi's only String Quartet arranged for string orchestra was vividly played but as music,wasn't particularly distinctive. Maria Agresta sang the short Ave Maria leading up to an extremely intense Libera Me, in the first setting before it became incorporated into the Requiem, which has featured at the Proms on 22 previous occasions. This was a very vigorous, energetic reading which suggested that the "freedom" here wasn't strictly spiritual.

This Prom can be heard on BBC I player HERE for 7 days online. It will be broadcast on BBC Four TV on 15th August. By delicious co-incidence, that's the Feast of the Assumption of the Virgin Mary.
at July 22, 2013