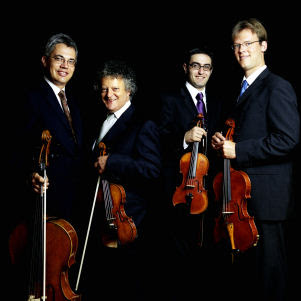 Lachenmann and Mahler at BBC Prom 5, with The Arditti Quartet,and the Bamberg Symphony Orchestra conducted by Jaonathan Nott.

"A musical negativa", Hans Werner Henze called Helmut Lachenmann. Henze, though not a Darmstadt devotee or theory hardliner, was innovative in his own way, so his views carry weight. In any case, Lachenmann thrived in the attention Henze generated, rather like Birtwistle thrived on the "Bad Boy" image created by the unsubstantiated story about Britten walking out of Birtwistle. Britten could read scores, and wouldn't have invited Birtwistle to Aldeburgh in the first place if he hadn't thought him worthwhile. You don't have to "like" music to appreciate its worth.

Lachenmann's Tanzsuite mit Deutschlandlied (1980) was an excellent choice for BBC Prom 5, whose audiences range from new music devotees to generalists who just go the Proms for a rousing night out. Even audiences with no idea who Lachenmann is will recognize the snatches of Bach, Handel, Haydn and the wacky waltzes and jazz riffs. These serve as landmarks, giving direction to a long work. Indeed, I think they're one of Lachenmann's jokes, since there is a lot more to the piece than a merry dance through German music history.

The Arditti Quartet can play even the most difficult works,with myriad virtuoso techniques. Modern music just wouldn't be possible without them. They made possible the modern revival of string quartet repertoire. I remember Irvine Arditti demonstrating the difference bretween pppp and pppppp.

One of the criticisms of Lachenmann is that he has a thing for gymnastic technical displays , sometimes for their own sake, which is why I've always preferred his more condensed chamber music to his larger scale works. Hearing Xenakis's  Pithoprakta, (1955-6) together with Lachernmann's Schreiben (2003) didn't do Lachenmann any favours. Tanzsuite for Deutschandlied works beautifully for me because at its core is a string quartet, the orchestra adding commentary and special effects, like the imaginative piano passages, magnificent percussion rolls, and sudden interjections from the brass.The long, barely audible introduction, the silences, the flurries of different pizzicato and percussive techniques  sudden swoons across the keyboard, a single chord on piano : immensely satisfying as a meditative zen sort of experience.

The Bamberg Symphony Orchestra is very good and enjoys a considerable reputation. The town is gorgeous though small, but the musicians are well served by the local community and university. The orchestra was playing Mahler in the 1960's under Joseph Keilberth. About ten years ago, Jonathan Nott recorded a series of Mahler symphonies with them where each symphony was paired with a modern work, including Henze. I liked Nott's Mahler 5 at the time, but less so on repeat hearings. This Proms performance was good enough and the Bambergers are always worth hearing.  Today I listened to the pre concert talk. Is that the level the BBC expect from their audiences? .