The Cheat 1915 - hypocrisy and dishonesty 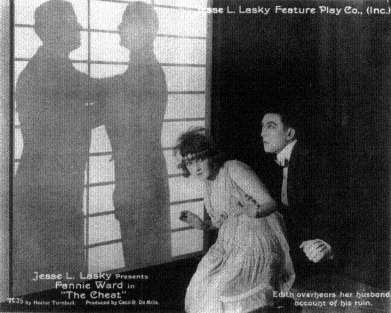 "Haka Arakau, a Burmese Ivory King to whom the Long Island smart-set is paying social tribute" is played by Sessue Hayakawa, (1889-1973) the first non-white to have a major film career. That in itself is telling. Not until Bruce Lee did Asians get to play important dramatic leads that didn't pander to stereotype. Arakau is seen using a Chinese incense burner to heat a branding tool to burn his seal onto ivory idols: the alien making his mark, in every sense. Because he's immensely wealthy, he doesn't get sidelined like nearly every other non-white in a era where race laws nullified reinforced prejudice. Arakau can switch from "oriental" to sophisticated western gentleman in elegant dinner jacket. He's threatening because he doesn't conform to stereotype.

Edith, a socialite, flirts with Arakau, even though inter-racial relations were illegal, and she's married as well. Not a nice lady. Her husband Richard teeters on the edge of bankruptcy but she can't stop spending wildly and showing off. She steals money from a Red Cross fund raiser to help her husband on a money making venture. Edith borrows from Arakau to cover the misappropriation, with the implication that she'll sleep with him in return.  She slips into the inner rooms of Arakau's home. There's a struggle. He coat slips off, revealing her naked shoulders. It's not very clear what's happening until Arakau grabs his branding iron and pushes it into her flesh. She falls to the ground: even then it's not completely clear how she feels. She doesn't scream, but gasps ambiguously. Then she picks up a gun and shoots him, also in his shoulder. Branding iron and gun: both symbols of sexual penetration.

Richard tells the police that he shot Arakau. The truth is too dangerous. The grid of the shoji screen is now reflected in the shadow of the bars in a prison cell. Edith, hardly in fear of being raped or attacked, goes to Arakau. He's reclining in bed, and she leans close to him. Note the hands that don't quite touch. She wants to bribe him to drop the case. "You can't cheat me twice", he says. "It's in the hands of the law". But he concurs with Richard's story. At last Edith is spurred to tell the truth. She rips her clothes off in front of the courtroom and displays her scar. This scene alone is quite shocking, given the proprieties of the time. Mayhem. The crowd attacks Arakau and Richard is freed. It's not very clear but Arakau seems to be arrested by the police. Better than than get lynched by the mob, I guess. Despite her duplicity, Edith is a "heroine". Who are the "cheats" here?

Apart from Hayakawa's dignified performance, the acting in this film is exaggerated, even by the standards of the time. Perhaps the direction is a further clue to meaning. Edith is the fake, Arakau has integrity even though he assumed she would sleep with him if she couldn't repay the loan. The director was Cecil B De Mille. Four years later, D W Griffiths made Broken Blossoms, on a similar theme of dishonesty, sexuality and racism, (read more here). Significantly, Griffiths used a white actor in yellowface for his later movie, defusing some of the impact.  De Mille couldn't confront racism head-on, but disguised it under a story audiences then - and now - take at face value. How modern audiences read The Cheat tells us a loit about racism today. Some will assume that Arakau gets what he deserves, since he's a foreigner and doesn't "know his place". Others will read the film as something much more disturbing and brutally honest.