The Keys of the Kingdom Gregory Peck busts stereotypes 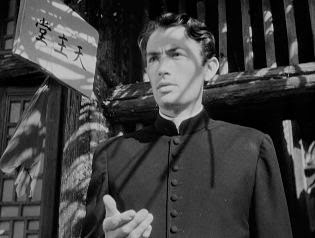 "A Christian is a good man, but I have found that a Confucianist usually has a better sense of humour".

The Keys of the Kingdom (1944) is such a famous movie that it hardly needs to be written about. But I love it because of its moral values. It's spiritual but mocks cant. It's also an interesting insight into western attitudes on China.  All his life, Francis Chisholm (Gregory Peck) has been a failure in the eyes of the world. To get him out of the way, the Church sends him to a God-forsaken outpost in China. There's no parish, and the locals resent him. He's reduced to living in a derelict stable. If that's God's wish so be it. Jesus was born in a stable, too. 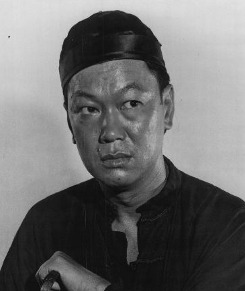 Then Joseph turns up, and things change. Joseph is played by Benson Fong. Fong's roles were defined by the Hollywood stereotype of Chinese as well-meaning but simple-minded menials. In real life, Fong, second generation US born, spoke good Cantonese and went along with the game. because he  had no choice.

Father Chisholm doesn't know medicine but cures the son of a high official, Mr Chia, played by a Caucasian in yellowface. Think about that, when Mr Chia's aide - a very minor role - is played by Philip Ahn, a good actor and a Chinese-American.  Father Chisholm won't accept the man's conversion in return, because he believes religion should be chosen by free will. Nonetheless, Mr Chia gives land and money for a mission.  Nuns arrive to help. They're dressed in white starched wimples, despite having trekked a thousand miles from the nearest sea port.  They're also arrogant, ordering a "Chinese coolie" around. It's Father Chisholm, or Shen Fu as he's known in the local community. He's dressed in native clothes, working with the earth, helping "hands on".

Miraculously, Father Francis's boyhood friend Willy turns  up. He's a hard-drinking atheist, but he does good because he's a doctor, and sets up the mission hospital. .On his deathbed he still rejects religion. The town is being besieged by warring forces.  Richard Loo, also US-born Chinese, plays Major Shen, the  leader of the Imperial Army. He's sophisticated and elegant. He lets the mission use a mansion for a hospital. It's burned to the ground when Gregory Peck and Benson Fong outwit the corrupt rebel commander (played by a Caucasian with a very high voice). Loo thanks Peck and Fong."We wiped out 32 of the enemy", he says. "One more killing like that and you'll force ME to become a Christian".

The Bishop arrives, It's Vincent Price oozing unctuous nastiness. "I must admit China fascinates me", he drools. He's done well for himself, thanks to his position of privilege. "And I disagree violently with those of our world who still regard the Chinese as an inferior race. Truly, there are no limits to the benefits of a belief in God and plenty of soap and water" It's horrifying, but even to this day, there are many who profess to "love" China but regard the Chinese as no more than servants or scenery.

After dinner, Joseph is washing up in the kitchen. He tells Father Chisholm, "I'm thinking a sinful thought". He drops the Bishop's prized bottle of Amontillado, brought from "home". Benson Fong looks sheepish, but defiant. "The benefits of soap and water" he says "made the sherry bottle fall and break". The Bishop leaves in Mr Chia's fancy sedan chair. He can't understand why the High Official doesn't want to convert, given the benefits that might accrue. "I shall never be able to fathom the oriental mind. It's inscrutable, positively inscrutable".  The Reverend Mother comes to Father Chisholm, saying she had wanted to go home. But witnessing the Bishop's arrogance made her realize that Father Chisholm's simple goodness restored her faith and vocation. Ten years later, they're still together, having rebuilt the mission and prospered. Father Chisholm, now old and grey, asks one of the children what he'd rather do, learn Cathechism or eat honey. "Eat honey" says the kid, without hesitation. The priest grins. "God loves you for telling the truth"

Eventually Father Chisholm has to go back to Europe,. The people of the mission line up to bid him farewell  Benson Fong delivers a sincere farewell. The Church hasn't been good to Father Chisholm and he's forced to retire. But he accepts it with good grace. Perhaps the Church thinks he's a failure because he hasn't achieved enough and his parishioners think he's an oddball. Maybe he was happy in China because he identified with it and its resilient people. "Exploited and abandoned by the world around her, starving and struggling to realize what was then just a dream. Unity and dignity  and a place in the sun"

The film was made at the height of the Japanese invasion of China, when the US government wholeheartedly supported the Chinese war effort. The sentiments, and the optimistic farewell scene, reflect the politics of the time. The US was instrumental in negotiating the end of the extra-territorial system and the creation of New China. But The Keys of the Kingdom works on another level which unfortunately is all too relevant today.  It dissects casual stereotypes about race and culture and treats people as Father Chisholm does, "all creatures of heaven" whatever that heaven might be.We don't need the "missionary position". The "natives|" wherever they may be, aren't passive children but  people can think and choose whatever they want to believe.
at July 16, 2013