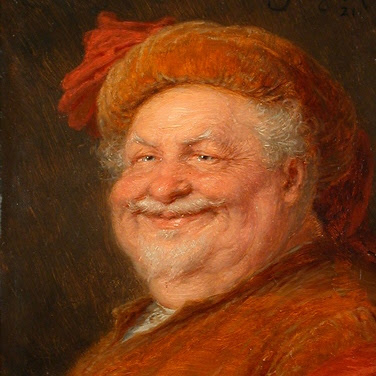 Elgar Falstaff and Tchaikovsky Symphony no 4 at BBC Proms 16?  What as the rationale?  Jac van Steen and the BBC National Orchestra of Wales showed how strange combinations can affect the way we hear things, and not quite in the way we expect.

Tchaikovsky told his patron Madam von Meck the final movement in his Fourth Symphony described a village fair where the peasants were merry, oblivious of all suffering.

"How lucky they are that all their feelings are simple and spontaneous. Reproach yourself and do not say that all the world is sad. Simple but strong joys do exist. Rejoice in other’s rejoicing."

Madame von Meck wouldn't have approved of Tchaikovsky's real inner life, so he told her what she wanted to hear.  Does hearing Elgar's Falstaff  in this context change the perspective on how we listen to Elgar?  Elgar was an outsider who adopted establishment values as a kind of emotional cover. On the other hand, he seems to have been a genuinely affable soul who liked having jolly japes. Falstaff is an inventive jaunt, full of joie de vivre. At the end, Falstaff dies but it's not Grand Tragedy.  Elgar loved it so much that he recorded his interpretation for posterity. Falstaff basks in the warm afterglow of late Edwardian innocence. Too much irony would spoil the dream. Van Steen and the BBC NOW played up its high spirits.

Van Steen paired Elgar's Falstaff with William Walton's Falstaff, or rather the fourth movement of a suite based on Walton's music for the 1944 film made during the Second World War when the populace needed cheering up. Like Madam von Meck, the audience didn't want to hear anything that might upset them.  I much preferred Elgar's joyful lack of guile. For Elgar, light hearted didn't preclude sincerity.

Between Elgar and Walton, Granville Bantock's Sapphic Poem (1906), a variant of the better-known Sappho, a large-scale piece for soprano and orchestra.There's an excellent recording by Vernon Handley and a very young Susan Bickley. Raphael Wallfisch was a superlative cello soloist. Performances as brilliant as this can "make" a piece. He followed with a section from Bantock's  Hamabdil (1919).

Fond as I am of Sappho  and the Sapphic Poem, there's something about Bantock that leaves me cold. He was obssessed by exotic fantasies, to the extent that nearly everything he wrote was a kind of technicolour travelogue. Last week at the Proms we heard a very rough and ready Szymanowski Symphony no 3 (more here). Szymanowski used exotic fantasy as a means of expressing musical and emotional ideas  For him, it was a means to an end. For Bantock, exoticism was an end in itself. Exoticism was his lifestyle statement, much in the way some people need to define themselves by the labels they wear and the brands they buy. Bantock was wildly fashionable in his time because he gave the public what they wanted to hear, without distressing them with anything too disturbing.

There a world of difference between Szymanowski's priorities and Bantock's florid flavourings. Since Bantock is this year's BBC Proms British Composer, we'll be hearing more. No doubt the Szymanowski comparison will come up, but it's wholly misleading.

Hearing Tchaikowsky's Symphony no 4 after Falstaff and the fake Falstaffs was like a bracing fresh breeze. Van Steen's approach was bracing. The turbulent motif in the Andante was unsettling, suggesting conflicts not easily resolved.  The crazy figures in the Scherzo seemed demented. Tchaikovsky said that the final movement represented peasants who didn't care about neurosis or self doubt. Madame von Meck read that as meaning "happy". For Tchaikovsky, perhaps, it meant that the world wouldn't understand people like himself, which is an altogether different interpretation.