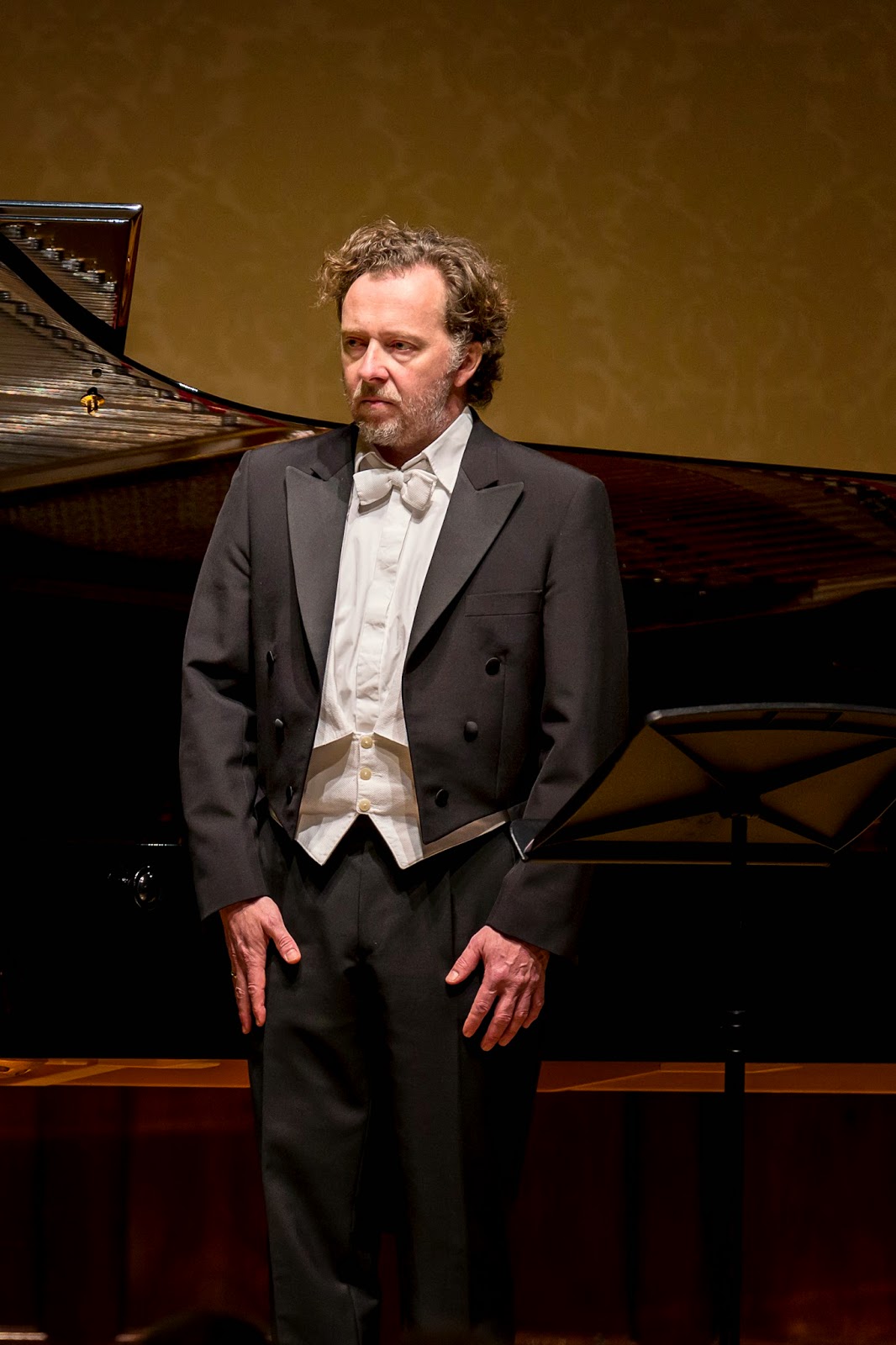 Star singer and star composer, a combination guaranteed to bring in the fans. Christian Gerhaher sang Mahler at the Wigmore Hall with Gerold Huber. Gerhaher shot to fame when he sang Wolfram  at the Royal Opera House Tannhäuser in 2010 (read my review here),  His "O du, mein holder Abendstern" was so sublimely beautiful that it seemed  to come from beyond the realms of reality. Wolfram is not so much a character in an opera as an almost divine symbol of  Knightly Virtue. But does the idealized perfection of Wartburg triumph over Venusberg?  Tannhäuser didn't think so, and Elisabeth chooses Tannhäuser.

Pertinent thoughts with a significant bearing on Mahler performance practice. Gerhaher began with Mahler's Lieder eines fahrenden  Gesellen. Far too much emphasis is placed on their autobiographical content. Like a Geselle, Mahler is learning his craft, through well-made "apprentice miniatures" that will form the basis of his symphonies from the first to the fourth, with echoes beyond  He was experimenting with the aesthetic of Des Knaben Wunderhorn, the collection of poems and  ballads compiled from oral tradition by Achim von Armin and Clemens Brentano in 1805. The folk origins of this collection are significant, for they embodied early 19th century Romantic attitudes, not authentic "folk" tradition so much as reworkings by intellectuals for the fast-growing urban middle class. Mahler wasn't writing fake folk song but songs as themes  that will later be developed in sophisticated abstract form.

Lieder eines fahrenden Gesellen isn't a song cycle so much as a series of stand-alone songs, each of which illustrates an emotional state, from the energetic "Ging  heut' Morgen übers Feld " to the scherzo-like psychosis of "Ich hab'ein glühend Messer". A certain amount of detachment on the part of singer and pianist is reasonable, but Gerhaher and Huber didn't engage with the emotional changes. Gerhaher's pace was fractionally too slow, not perhaps enough for most to notice, but enough to keep voice and piano out of synch. Huber jumped in too forcefully.

A selection of songs based on Das Knaben Wunderhorn followed, including early songs from the  Lieder und Gesäng,e aus der Jugendzeit. Songs about children, but songs with a macabre twist, reflecting a very different attitude to youth than we hold today. After Bruno Bettelheim, we can't take fairy tales at surface value. Even the lyrical "Zu Strassburg auf der Schanz" describes a soldier who deserts his post and is executed. "Das irdische Leben" could deal with child abuse, or the fate of unrecognized talent, but by its very nature, it should express something.  Mahler returns to the theme in later works, so it must have had more meaning for him than Gerhaher and Huber brought to it on this occasion. Possibly Gerhaher wasn't well as he mopped his brow a lot, which is perfectly acceptable, especially at this time of the year. But no matter how beautiful a singer's instrument might be, artistry resides in the way it is played. To paraphrase Mahler himself, "the music lies not in the notes" but in the communication of ideas.

Kindertotenlieder marks a transition in Mahler's music leading away from the world of Wunderhorn towards more conceptual horizons. In many ways, this group of songs resembles a five-movement symphony, integrated by recurring motifs of dark and light,  rising to a transcendent finale, where the storm is vanquished, and the children "vom Gottes Hand bedeckt". In its own way not so very different from the redemption and transfiguration that marks works like Das Lied von der Erde. To reach this resolution, however, the poet has had to undergo extreme desolation.  Friedrich Rückert knew about death and anguish. In "Wenn dein Mütterlein" , he refers to gazing, not at the mother's face, but closer to the ground, where children should be. It's detail that could probably come only from lived experience. Dignity is in order, and restraint, but emotional truth is of the essence. As Tannhäuser might have said, good singing isn't everything.

For an encore, Gerhaer and Huber offered a piano version of Urlicht from Mahler's Symphony no 2.  "Der Mensch liegt in größter Pein!" .He is so rejected that even the angels want to turn him away. but that only strengthens his resolve. "Ich bin von Gott und will wieder zu Gott!". At last, Gerhaher's voice took on more colour and more definition. An excellent encore. If only the rest of the recital had been as good.