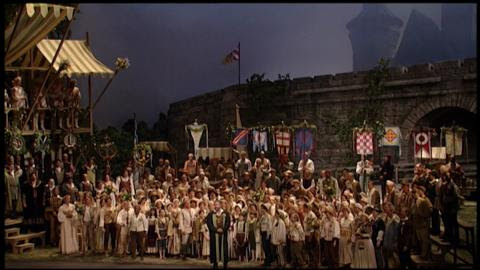 The Met's Wagner Die Meistersinger von Nürnberg broadcast HD.  I listened audio only on BBC Radio 3 (still available online). Last week, someone on the BBC said that Wagner wrote about myths and legends, but Die Meistersinger was "about love".   Has the age of Mills and Boon Wagner arrived? Just as there's a lot more to the Ring than galumphing Gods, there's a whole lot more to Die  Meistersinger  and indeed to Tristan und Isolde than potboiler romance. Most people, I believe, want to learn, but when  the media is a source of over-simplified trivialization, what will they learn?

The better a creative work, the more there is to learn. That could be the philosophy behind  Die Meistersinger,  a work which is as much about art and the making of art as "love interest". Eva and Walter spot each other as strangers.  Maybe it's love at first sight, but maybe more. Walter is an outsider, who believes in ideals but fits in nowhere. Eva is part of the Establishment but a woman can't participate as an equal.  But she can spot a true talent better than the Meistersingers with all their supposed authority. Johan Botha's voice is so exceptionally divine that the Meistersingers must have cloth ears not to notice. Yet for all their supposed wisdom, they're fooled by Beckmesser and would have kicked Walter out but for Sachs's intervention. Therein a parable for our times, when even the wisest believe what authority tells them.  Perhaps it's human nature to need  received wisdom and safe opinions, but this opera makes clear that true artistic breakthroughs come from those who, like Walter, do things differently. The Meistersingers set store on following masters. Walter learned from birds.  Beckmesser's a troll, more interested in destroying nascent talent than doing anything worthwhile himself. Maybe the system lets people like that rise to the top? Eventually Walter decides to stay in Nürnberg to perfect his craft, but fundamentally his nature as an artist stems from creating anew and from being true to himself.

Die Meistersinger is dominated by huge choruses. Each guild has its rules with which to control. Who would dare buck the guilds en masse but a Walter?  The Third Reich made a cult of Die Meistersinger idealizing the values of mob rule and conformity.  Who would dare dissent when 800 people are roaring their take on ""Heilige Deutsche Kunst" with their arms raised in diagonal salute?  As I listened to Michael Volle's firm, assertive Hans Sachs, I thought of  Wilhelm Furtwängler. What really went on in his mind as he conducted at Bayreuth in the midst of the maelstrom? Perhaps, like Hans Sachs, he bided his time quietly, not overtly bucking the regime, but offering music that subverts the anti-intellectual group-think that fears change.

Die Meistersinger von Nürnberg supports many different approaches. Read HERE about the groundbreaking Salzburg Meistersinger, with Michael Volle, which developed the connection between Sachs and his art and between Wagner and his time. Maybe it's not entry-level, but anyone can learn. It's a very deep engagement with the ideas in the opera.  Compare the photo of the Otto Schenk production first heard nearly 30 years ago and the still from Bayreuth, 1943.  Tradition is all very well, but true art lies in fresh thinking.

PS If you want to hear the same production but with a REALLY good conductor, listen to the Vienna State Opera performance conducted by Christian Thielemann with Johann Botha and Falk Struckmann