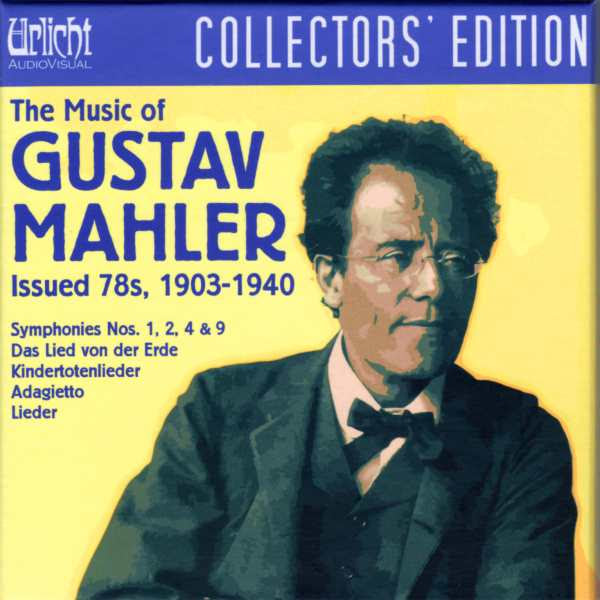 A specialist collection of Mahler rarities reaches the New York Times Xmas gift giving list! It's not often that a collection like this made by a small, independent company of serious Mahler enthusiasts competes with heavily marketed big corporations. Absolutely, it's worth supporting.

This collection is  probably the definitive set of recordings of the music of Gustav Mahler from 78s issued between 1903 and 1940. Although some of these recordings have been known for some time, this new 8 CD set from Urlicht Audio-Visual is a collectors' item because it's so beautifully put together. This is the most comprehensive collection ever assembled, including every recording listed in Peter Fulop's Mahler Discography.
The booklet, with notes by Sybille Werner and Gene Gaudette, is a work of scholarship. It evolved from Werner's research with Henry-Louis de La Grange into the reception of Mahler's music in this period, which proved that the composer's music was heard more often than previously assumed. Werner and Gaudette's notes for this set contain the most comprehensive description of the world of recording in this era, and the people involved. They explain the odd sound balance on the first acoustic recording, Ein Mädchen verloren (from Die Drei Pintos) by Leopold Demuth in 1903: the baritone has to shout into the horn of the recording machine. This sort of insight informs the way we listen to performance practice.

Read Werner's analysis of Oskar Fried's portamento and "surprisingly steady tempo" in his pioneer recording of Mahler's Symphony no 2 in 1924, one of the first full orchestra recordings made possible by new electrical technology.This was one of the last major acoustic recordings made by Polydor. Had they only waited about a year! Fried knew Mahler personally, as did Willem Mengelberg, whose 1926 Adagietto from Mahler's Symphony no 5 is included, but it would be wrong to deduce how Mahler himself might have conducted. This is also an opportunity to compare Mengelberg's Adagietto with Bruno Walter's, made in Vienna in January 1938. Some of these recordings are well known, such as Jascha Horenstein's 1928 Kindertotenlieder with Heinrich Rehkemper, which Benjamin Britten played incessantly. But Mahler enthusiasts will treasure this new set because the transfers are new, and made by the best people in the business, Ward Marston and Mark Obert-Thorn. You can hear the difference. Surface noise is reduced and the music shines more clearly.

Hidemaro Konoye's pioneer recording of Mahler's Symphony no 4, plagued by poor sound quality, now shows why Konoye was involved with Franz Schreker, Richard Strauss, Fürtwangler and Erich Kleiber. Marston and Obert-Thorn used originals in their own collections and also from a number of extremely scarce discs that were lent from the collections of Raymond J Edwards Jr, Nathan Brown and Charles Niss. The transfer of Mahler's Symphony no 1 ((Mitropoulos, Minnesota Symphony Orchestra), was provided by Charles Martin. Great classics like Bruno Walter's Das Lied von der Erde (Kerstin Thorberg, Charles Kullmann) are on this set, in cleaner sound, but also relative rarities like a 1928 potpourri of Das Lied von der Erde (Dol Dauber Salonorchester, Wien), and Um Mitternacht transcribed for voice and organ, recorded in Central Hall, Westminster, London, in the same year. These ventures may suggest that attitudes to music were different to today. That's why we need to know the archaeology of musical performance. There are no rigid rules. Styles change, just like accents in speech change. These recordings were made when Mahler was "new music". But all good performance approaches the score in an original way and makes the music feel new. This Urlicht Audio Visual set, Gustav Mahler issued 78s 1903-1940 is a milestone, an essential reference work for anyone interested in Mahler and in perfomance history. The transfers supersede earlier versions, and Sybille Werner's notes are unique. Click on the link at the beginning of this paragraph to purchase. The set has been compiled not by anonymous mega business, but real Mahler enthusiasts who care passionately about what they are doing. They deserve our support.