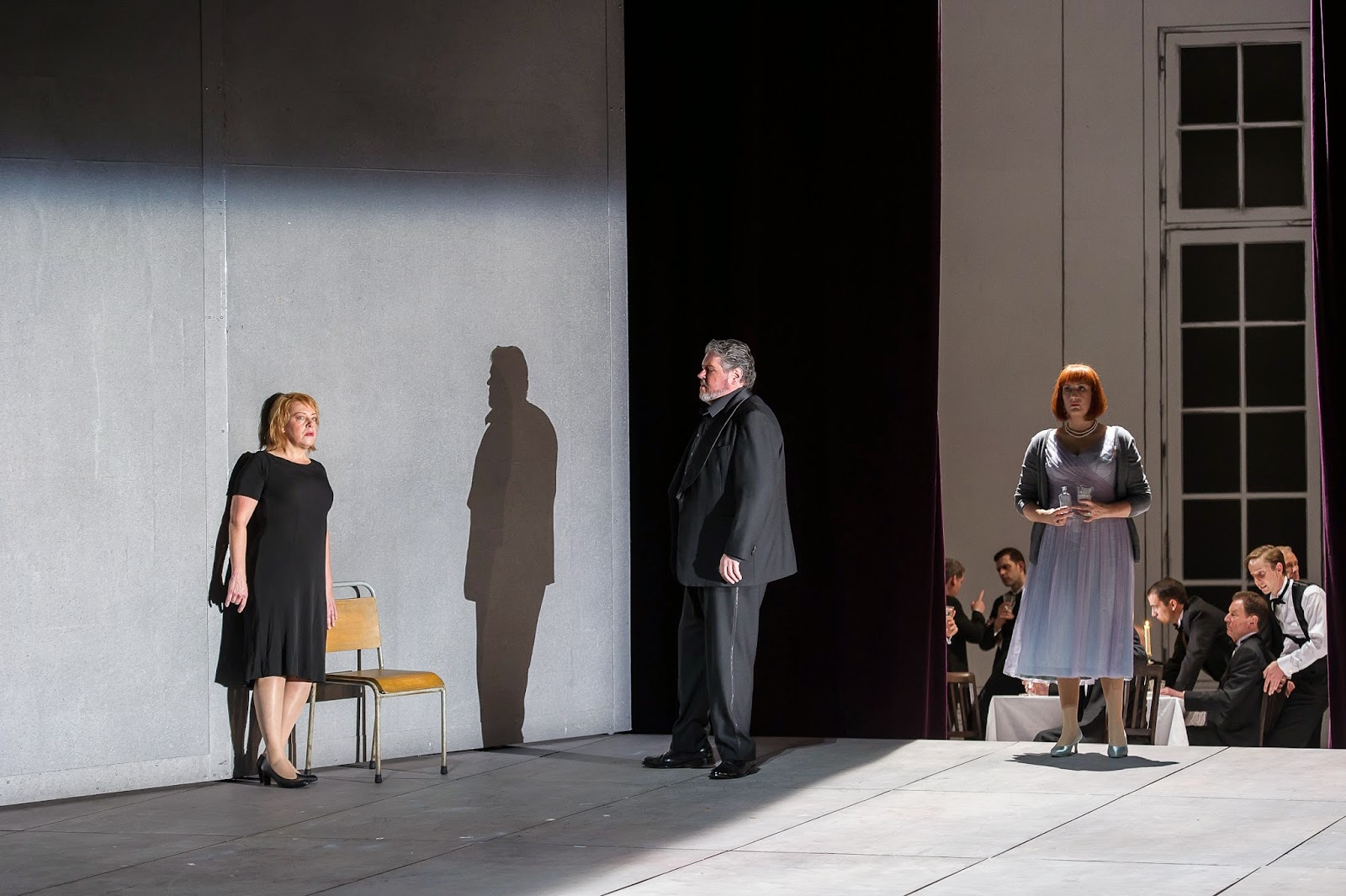 Wagner Tristan und Isolde at the Royal Opera House, first revival of the 2009 production – one of the first to attract widespread hostility even before the curtain rose on the first night. Modern costumes seems to attract extreme hatred. But does the meaning of a great drama lie in fancy external trappings? Tristan und Isolde is immortal because it is universal, based on a legend which in itself has developed over the centuries. Wagner used his creative imagination.  Have we lost the ability to think, feel and dream that we cannot cope with  opera unless it is as literal as TV costume drama?  Throughout the opera, we hear the pulse of the oceans, and can imagine the pull of the forces of nature and fate that operate beyond what we see on the surface. So, too, should we approach Tristan und Isolde as a work with such depth that it would be against the very nature of art to deny its many different levels of meaning.

Isolde is a captive, a trophy of war turned trophy wife. She's inside an elegant structure, but trapped, away from the elements of nature in which she once thrived as a practitioner of powerful healing arts. King Marke's court celebrate victory with a feast. Isolde walks out, to be alone. She does not belong in that milieu. Throughout this staging, directed by Christof Loy and designed by Johannes Leiacker, curtains and flat walls define the divisions between different worlds. For all the bustle of court, the key protagonists are alone, figures who don't thrive by conforming to social mores. Tristan would seem to have everything: he's a hero, loved by most, who might have a happy future, but that's not what he wants. The stark divisions of the set emphasize this anomie; strong planes and angles overpowering the figures on stage, throwing their predicaments, literally, into sharp relief.

Hence the shadows. Throughout the opera, Wagner emphasizes contrasts between darkness and light.  Since shadows are created by darkness and light, they are a far more subtle expression of music and meaning than costumes can ever be. The lighting (Olaf Winter) spotlights the singers and throws their shadows back against the hard walls in silent rebellion against larger, impenetrable forces.  Sometimes the shadows are huge, compelling attention. Sometimes they shrink, sometimes they interact with the shadows of other members of the cast. The shadows suggest emotional states which words cannot express. Tellingly, they often reflect details in the orchestra. In King Marke's court, Tristan and Isolde are shadows of themselves and what they might have been. Wagner said "Kinder,  macht neu". How fascinated he might have been with the power of technology to open out deeper levels of meaning.

Nina Stemme dominated the stage even when she wasn't singing, Stemme's persona is so strong that she can create Isolde as a force of nature.  In the beginning of the First Act, where nothing ostensibly seems to happen, the intensity of Stemme's singing  evokes the bitterness of her predicament. She intones with barely suppressed force, as if the pulse of the ocean itself were surging beneath the smooth surface. Stemme's Liebestod was impressive because it was understated. While showpiece Liebestods are wonderful, Stemme reminded us that it is the music, and the pulse in the orchestra that really matters, not grand diva ego.  As she sang, her voice rose with firm, genuine conviction.  Will she live or die? Like Brünnhilde,  she triumphs because she's found moral truth. Around her body, a golden light rises. It doesn't obliterate the shadows beyond, or the poignancy of the situation, but reminds us that Isolde is human, which makes her apotheosis all the more moving.

Stephen Gould was an excellent choice as Tristan. Ben Heppner's Tristan in 2009 was unusual in that Tristan wasn't portrayed  as comic-book hero but as a man ravaged by demons in his soul.  Tristan has been an action man all his life, but when, as he's dying,  he finally opens out to Kurnewal, he sings of the tragedy that's haunted him even before birth.  In a sense, this is his Liebestod, and he sang extremely well. Like Heppner, Gould has physical presence, suggesting strength developed through years of trial, but Gould's voice is in better condition. Pretty boys might look cute, but they aren't necessarily right, if we're sensitive to the score. Like Stemme, Gould  impresses because he's solidly in the part, rather than flashy. His voice conveys genuine, complex emotions. I've been an avid fan since he sang Paul in Korngold's Die tote Stadt. (read more HERE)

In the sense that vocal perfection isn't everything, John Tomlinson's King Marke worked as dramatic portrayal. His voice may be in shreds, but perhaps Marke is much older than we assume. If Tristan is ravaged by inner demons, Marke is ravaged by time.  I winced when Tomlinson missed notes, but that added to the sense of overwhelming tragedy. I due Foscari worked for me (read more here) because Domingo was singing the role of an old man facing fate. Quite moving, in the circumstances.

Christof Loy's original direction has been modified in this revival, unfortunately cutting out some very good ideas. For example, the erotic undercurrents have been toned down and with that much of the undercurrent of danger which so alarmed audiences five years ago. But Tristan und Isolde predicates on the background of male violence. Tristan has to be a warrior because that's  what's expected of him. Kurnewal treats Isolde and Brangane badly because they are women. Audiences may not like that, but the ideas are in the score. If only the Royal Opera House had the courage to restore the original, much tighter, vision.