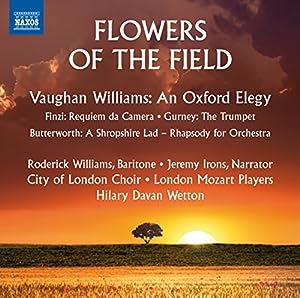 "As for man, his days are like grass; As a flower of the field, so he flourishes", so goes Psalm 103. This new recording, Flowers of the Field  connects composers affected by the 1914-1918 war, but it's real significance lies in its featuring the world premiere recording of Ivor Gurney's The Trumpet and of Gerald Finzi's Requiem de Camera.

Ivor Gurney was gassed at Passchendaele, and spent the last 20 years of his life in and out of mental  hospitals. The Trumpet was written in 1921 but remained unpublished and unperformed until 2007. Here we hear the edition reconstructed by Gurney scholar Philip Lancaster with full orchestration, which received its Three Choirs Festival premiere in 2010, which I was privileged to attend.  Read Philip Lancaster on the genesis of the piece HERE.  Gurney used a poem by Edward Thomas, killed in Arras in 1917, whose work he had set previously. The song begins with a resolute "Rise up! Rise up!", the City of London choir singing as one voice with forceful attack. It's a curious poem. Does the trumpet  refer to the trumpet of modern battle or to the trumpet that marks the beginning of the End of Time in the book of Revelation? Gurney emphasizes the word "Scatters" in the phrase "as the trumpet blowing scatters the dreams of Man".  Unlit stars, dew and the traces of lovers must be scattered in this strange new dawn. Percussion pounds, and the full orchestra surges. The choir cries out, unequivocally "Scatter it, Scatter it!". The clarity of the setting reflects the image of  "that clear horn"  and "the air that has washed  the eyes of the stars". No maudlin sentimentality here, but clear-sighted fervour. "Arise! Arise!" the choir sings. After Armageddon, the past will be erased, the dead will rise from their graves in a new era of hope.

Strictly speaking, the premiere recording of Gerald Finzi's Requiem de Camera was conducted by Richard Hickox nearly ten years ago, but in a different  performing edition by Philip Thomas, made in 1990. This version is edited and completed by Christian Alexander. Hilary Davan Wetton conducts the London Mozart Players with idiomatic depth.  The Reqiuem de Camera (1924) is an ambitious piece in  four sections. An orchestral prelude leads to an extended choral setting of a poem by John Masefield  "How still this quiet cornfield is tonight". The text doesn't explicitly mention context, but the original poem was titled August 1914. Although this is very early Finzi, we can already hear how he would go on to be influenced by images of English landscape and history, and the passage of time.  Wetton, who has conducted a great deal of English choral music, gets the City of London Choir to sing with nicely hushed tones: silence is of the essence.  The same mood of timelessness prevails in the section for baritone (Roderick Williams) and orchestra: "Only a man harrowing clods".  Finzi dedicated the work to Ernest Farrar, his tutor, who was killed on the Somme in 1918, but I think it's a mistake to overstate the idea that the Requiem connects musically to Butterworth or to Gurney (whom Finzi championed). It is far more relevant to assess its relevance to Finzi's own later work, and to his songs and choral pieces. It's not as sophisticated as Intimations of Immortality, but contains, in germ, the spirit of Finzi's future greatness.

On this disc we can hear Butterworth's A Shropshire Lad – Rhapsody for Orchestra and, more of a rarity, the complete Ralph Vaughan Williams An Oxford Elegy, with Jeremy Irons as narrator. The Oxford Elegy is based on a poem by Matthew Arnold about a scholar who runs away to learn from gypsies.  He could be any man who disdains academia for real life experience: I don't think we should make too much of its connection to Oxonians who went to war, since it was written 1946-9 in the wake of a much more gruesome war.  Oddly enough, its connection to George Butterworth isn't mentioned in the booklet notes, a surprising omission in a compilation based on 1914-18. Butterworth and Vaughan Williams were so close that RVW might have not developed as he did without the influence of Butterworth, who pushed RVW creatively, and for whom RVW dedicated his Symphony no 2 "London" in 1913.

Please see my numerous other posts on Gurney, Finzi, Butterworth and RVW (use labels below)
at December 10, 2014