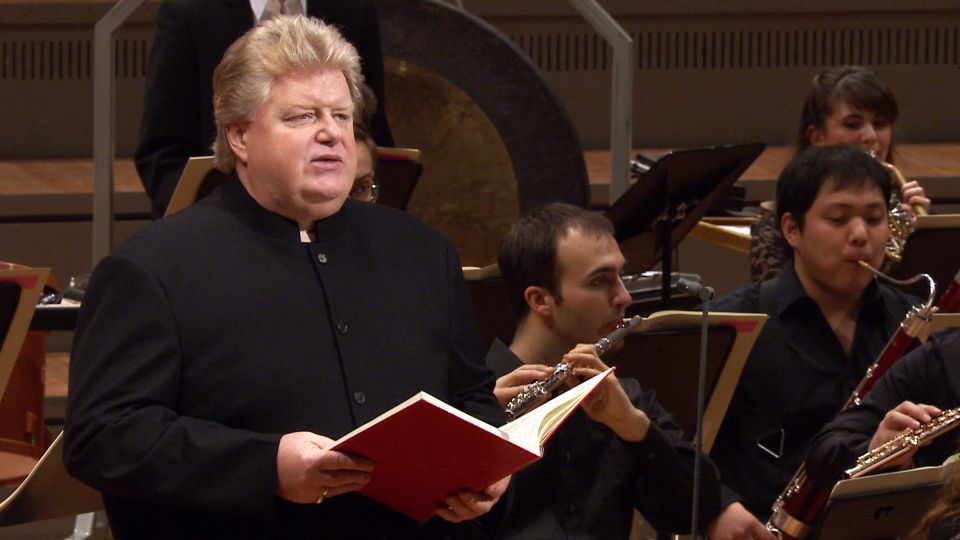 Hans Zender's Schubert's Winterreise  can now be viewed in the Berliner Philharmoniker Digital Concert Hall.   For my latest piece on Ian Bostridge and Netia Jiones Dark Mirror at the Barbican, click here.  Notice the full title "eine komponierte Interpretation", an Interpretation, not simply an orchestration of the cycle for piano and voice. There's absolutely no way it's a substitute for the original, nor even an orchestration, but rather a meditation by a modern composer reflecting on his response to the most iconic song cycle of all. When it premiered, there were some who sneered,  but they'd completely missed the point. It's a work of art about a work of art, and a valid creative response. Indeed, I think the more you love a piece, the more you should be interested in new approaches. Liszt, for example, wrote elaborate improvements to Schubert. I don't think Liszt understands Lieder at all, but I listen because I like hearing a pianist's way of getting into the songs. I must have heard thousands of Winterreises, but still thrill to something original.

Zender's Winterreise begins so slowly and quietly that you'd miss it if you weren't paying attention. We hear the sound of muffled footsteps, as if someone were trudging in deep snow.  The video shows us that the sounds are made by brushing metal sheets on the skin of timpani. Steady pizzicato heartbeats, and tense bursts on wind instruments, exhaling and drawing breath. Very physical. As the pace picks up, a familiar melody, but oddly mechanical. The protagonist is determined to keep going lest his feelings overwhelm him. Christian Elsner starts singing, normally enough, but suddenly, from "von einem zu den andern", his voice turns  metallic, words repeat and the orchestra whizzes into a manic march.  Just as suddenly, a switch back to normal with"Fein Liebchen, Gute Nacht" but now we know the lyricism is forced.

Winterreise is uncommonly pictorial music, the protagonist aware of his surroundings even in the extremes of grief. Indeed, his moods seem influenced by what he experiences around him.  Zender's music is graphic - including wind machines and guitar - but this is in keeping with the original. Indeed, Zender marks short pauses for contemplation. Years ago, at a Wolfgang Holzmair masterclass, Holzmair told us to listen, like an animal might, sensing which trail to follow. This is no passive, meandering journey. but purposeful. the protagonist learns from the crow, the graveyard, the three suns in the sky. Nonetheless, Zender's music is abstract enough that it's not mere illustration. Sudden turns, strange distorted sounds. Sometimes Elsner recites rather than sings, as if he's trying to pick up an invisible trail. It feels at once natural, personal and yet surreal.  The music throws you off-course, so you're as disoriented as the protagonist and  start thinking like him. The recitations also remind us of the literary background to the cycle: Wilhelm Müller is most certainly present here, for Zender's making a connection to "pathetic fallacy" and the way art interacts with experience.

I first heard Zender's Winterreise in 1994, conducted by Zender himself, with Ensemble Modern and Hans-Peter Blochwitz at the Queen Elizabeth Hall, London. The musicians moved around the auditorium, like the kind of wandering peasant bands that used to travel from village to village.  In this performance the members of the Orchestra Academy of the Berliner Philharmoniker move, too, because it's part of the basic concept, but come and go and go as the music changes, physically changing texture.  Sometimes they're everywhere, sometimes, Elsner's almost alone. Given Simon Rattle's commitment to nurturing young musicians, he conducts them himself, instead of farming the job out. Zender's Winterreise is a marvellous "learning" piece because it's so inventive. Would that other orchestras learned to rethink what they do in such a creative way. It's a joy to hear Christian Elsner, too. A few years ago, he was everywhere but seems to have spent the last few years in Germany. His voice is still fresh and agile and he interacts well with the musicians.  Let's hear more of him!
at December 13, 2014