Fonógrafo - a poem about recording technology 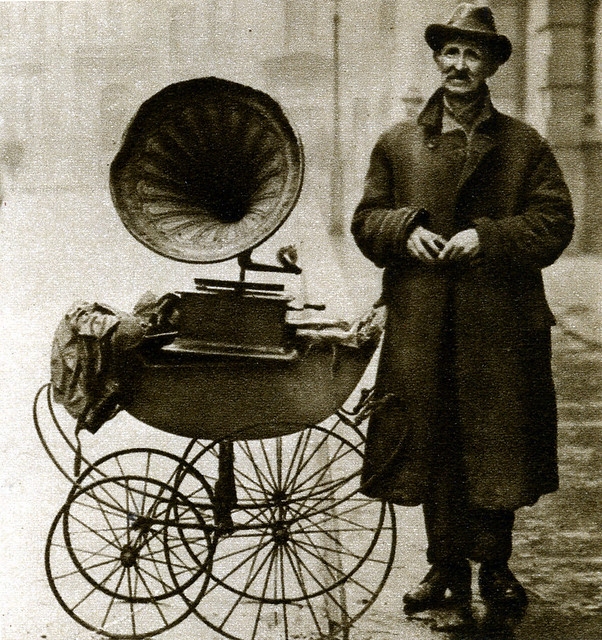 A poem about the latest technology - phonographs! The poet is Camilo Pessanha ( 1867-1926) who left Portugal for Macau in 1894.  So chances are, he listened to phonographs, which reached the China coast almost as soon as they became commercially available in Europe. Pessanha went to Macau because he was  fascinated by the exotic mysteries of alien cultures. In Macau, he lived as a Chinese, learning the language, collecting art and even becoming addicted to opium. His art collection isn't that great and his poetry in Chinese not nearly as good as his poetry in Portuguese, but at least he tried, like quite a few intellectuals in his time. So perhaps it's no surprise that he was fascinatedd by the possibilities of sound reproduction.

Imagine someone hearing sound technologiy for the first time, pondering on what it might mean. Pessanha describes the voice of a comedy actor, declaiming to an audience. But the actor is long since dead, and the original audience too. The odour of the crypt, and of dust, enters the air. Change the record! Now a barcarolle, suggesting lilies floating on the water, and sensual dreams evoked by the "extática corola". The record changes again. Now, the sound of a golden bugle (clarim) suggesting daffodils greeting the dawn. Then, silence. The poet thinks of Spring, morning and the scent of violets. 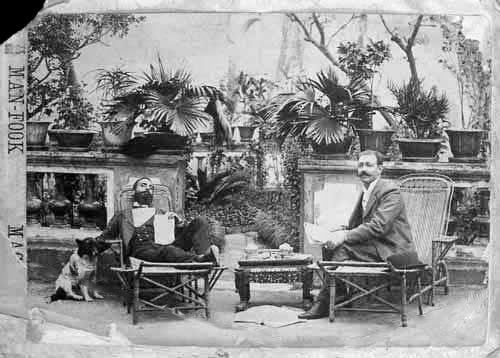 I'm not sure if the poem was written in Macau, since Pessanha did return to Europe for short periods, although he made his home in Macau and is buried there with his son, with whom he scrapped.  (Just now, a kind friend said the poem was written in Macau in 1920.)  But the poem is nostalgic, connecting the phonograph's ability to preserve ephemeral moments in the past and make them seem fresh again.  Definitely a poem we should think about, now that we take recording for granted. The photo shows Pessanha in a garden in Macau with another poet, Wenceslau Morales, who went to live in Japan and studied Japanese. Pessanha is the one reclining on the deckchair, looking doped up. Those pots in the background would be Qing antiques now, and the furniture. But thanks to photography (Chinese studio) the poets, the dog, and the plants are preserved forever.