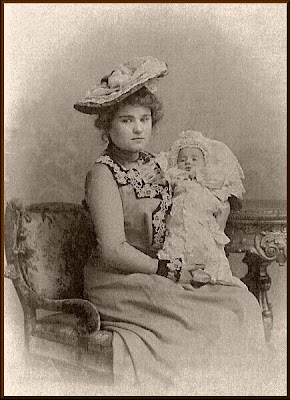 Vladimir Jurowski conducted Josef Suk's Asrael last night in a blazing performance that shows why this symphony is coming into its own 105 years after it was written.

Asrael is the Angel of Death in the Bible. The picture is Josef Suk's wife, Otilie Dvořàk, who died suddenly not long after the photo was taken. The baby much later became father of Josef Suk the violinist, who's thus a direct descendant of two major Czech composers.

The shock of Otilie's death compounded Suk's grief over the death a year before of her father Antonin Dvořàk, who was Suk's mentor and own father figure. Asrael, Symphony for large orchestra was Suk's way of exorcising the trauma by channelling it into music.

The symphony is monumental, built on two huge sections like pillars. The scale is panoramic, even cinematic in the way its moods progress in distinct episodes. By emphasizing dynamic contrasts, Jurowski keeps momentum, so the traverse keeps moving towards its resolution. Big as the piece is, what’s striking is its understatement and quiet dignity. Brass fanfares, for example, are deliberately muted so they sound numb and hollow. It’s a jolt, since brass often heralds triumph.

Solo instrumentals are pivotal. There’s a dialogue between Kristina Blaumane’s cello and Alex Venlizon’s first violin. Cellos feature strongly in the first part, generally understood as a portrait of Suk’s dead wife. The composer himself played violin. So beneath the tumult, there’s surprising intimacy. It isn’t just the image of a biblical angel that comforts Suk, but the memory of his happy marriage.

In this unusually well planned programme, another angel appears. In Janáček’s The Eternal Gospel, the angel comes from the Book of Revelation. The poem, by Jaroslav Vrchlický (1858-1912), is a "modern" take on Revelation, based on a 12th century mystic's vision of the end of time when "wealth, all possessions, gold, jewels and fortune will turn to mire". It's incendiary stuff, attacking the "she-wolf of Rome". It even knocks Jesus, who "only stooped to man". Raising St Francis oif Assisi above Christ isn't something a 12th century monk would or could do. This is clearly Vrchlický's poem, not Joachim di Fiore, but an adaptation. It's uncompromisingly radical, way beyond piety or even nationalism. Janáček, passionately anti-clerical, could spot a cogent bit of blasphemy.

The Eternal Gospel was written around the First World War, when the destruction of the old order did seem apocalyptic. This was a critical point in the Czech struggle for independence. The “Allelujahs!” here aren’t religious, but political.

The piece also represents a critical point in the composer's development. In 1917, Janáček was poised between his "old" style of writing and the breakthroughs he'd reach with The Diary of One Who Disappeared and what was to follow. The programme notes cite the Glagolitic Mass, but we wouldn't have the major operas, and much else, without the incendiary transformation that The Eternal Gospel really represents.

Adrian Thompson substituted at very short notice for the scheduled tenor, so his performance was truly remarkable. He sings almost the whole 20 minute piece, and in Czech, a tough language to master. His diction was so clear that it was easy to follow the text throughout even for non-Czech readers. He was clear, even above large orchestra and choir. An impressive achievement, for which he deserves major praise. (He's recorded this for Hyperion, which I haven't heard, I only have Benno Bl;achut) Sofia Fomina, singing the Angel, had less to do, because Janáček isn't that interested in the angel, except as justification for the wilder sentiments expressed in the tenor part.

The evening started with a lacklustre Taras Bulba. Perhaps Jurowski and the LPO were saving their energy, because we can hear that piece anytime. Much better that they concentrated on The Eternal Gospel (by far the greater rarity), and Asrael, and carried them off with such conviction.

This concert was recorded and will be broadcast on www.bbc.co.uk.radio3 on Wednesday 24th Feb and available on demand for a week thereafter. Listen, because Jurowski's approach is thoroughly individual. It's a keeper. There are many recordings of Asrael, which is fairly well known, but Jurowski meets the standard, easily.
Coming up soon : Diary of One Who Disappeared !
at February 21, 2010

Thanks for the review.

Please could you amend the Radio 3 broadcast date to Wednesday 24 February?

The ultimate Asrael CD has been released.
The only recording by an orchestra from Suk's Moravia, the Brno Philharmonic with Jiri Waldhans.
Circmumstances surrouding the performance result in the most dramatic since the highly regards Talich recording.
Just 3 months after the invasion of the then Czechoslovakia in 1968 the orchestra was required to perform this tragic masterpiece in the Royal Festival Hall.
The performance was influenced by the effect of the political situation back home for the members of the orchestra and the outcome was probably the best performance of all time.
In addition a totally new technique was used in the recording process; known as CNSTR, certified natural sound technique recording the priority being to create an acoustic mirror image of the sound in the auditorium.
You can hear a sample by visiting:
www.orchestralconcertcds.com The sound sample is a generous demonstration of the performance and sound quality.
Lazinov