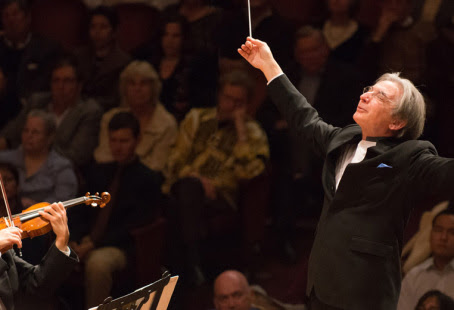 From Juliet Williams in Edinburgh


The visit of the San Francisco Symphony under their principal chief conductor, Michael Tilson Thomas, was one of the highlights of this year's Edinburgh Festival and part of a programming strand featuring American music and musicians.

In the opening performance, they showcased a work commissioned for the orchestra's centenary in 2012, John Adams' Absolute Jest. This work pays homage to Beethoven and in particular the late quartets, which are heavily quoted. However it creates a very new musical experience by having a string quartet – here the St Lawrence Quartet – performing with full symphony orchestra. No one player is a soloist in the conventional concerto sense, nor even in the way that the solo parts of a double concerto are distributed; the quartet is collectively one but a many-layered voice, which passes the melodic lead between the orchestra and itself as well as between its players. Hence the work looks forward as well as back; it creates a new musical experience in its form; it is modern in its sound world and it pays homage to one of classical music's most important figures. It is a very fitting piece for the orchestra's centenary. San Francisco Symphony have also recorded this piece.

This orchestra is to my mind heard at its best in minimalist works. It has a glistening, shimmery sound which is uplifting to the listener, hopeful and expansive. Whilst the Adams commission brought this out more than any other work on the programme, it was also brought to the fore in the expansive later sections of the second movement in Tchaikovsky's Fifth, which was performed to close the second Edinburgh concert.

The Adams commission was given context by the performance also of Beethoven's own work: here in Edinburgh, his fourth Piano Concerto in which Philadelphia-educated Yuja Wang was the flamboyant soloist; in the two-centre UK tour taken as a whole, the Eroica symphony too (Proms, Mon 31st August). Ms Wang was very popular with the Edinburgh audience, the Usher Hall was filled to capacity and she received rapturous applause. Her musicianship was further displayed in an excellent Queens Hall recital earlier in the week with Greek violinist Leonidas Kavakos. She joins the San Francisco Symphony again in London on August 31st, this time to play Bartok's Second Piano Concerto.
Perhaps the highlight of the entire visit, though, was the performance of Mahler Symphony no 1 – of which Michael Tilson Thomas is a noted interpreter – forming the second half of the first Edinburgh concert. It is to be repeated this evening (Sun 30th August) at the Proms, and is very well worth making the trip to hear. If you can't do that, it's broadcast live on Radio Three. The London performance will also include Boston-based pianist Jeremy Denk playing more of what he has described as 'bad boy pianism', the idiosyncratic Henry Cowell concerto.

No American programme would be complete without Ives, and his ‘Decoration Day’ from 'New England Holidays' opened the second evening. The first of the two concerts was opened by a particularly enjoyable account of Schoenberg's Theme and Variations (Op 43b) – possibly the best live performance I've ever heard of this particular piece.