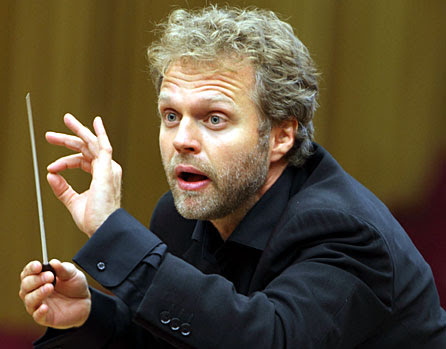 At Prom 64, Thomas Søndergård conducted the BBC National Orchestra of Wales. Like many organisations, orchestras can go throughout a period in the doldrums. Something interesting has been happening in Cardiff.  The BBC NOW are sounding reinvigorated and refreshed. Their Prom in July under Xian Zhang (read more here) showed them in excellent form. Under Søndergård, their  Chief Conductor, they're even livelier, as shown in their Carl Nielsen's Aladdin Suite, (1919)  incidental music for the play Aladdin. Did the original play include dance?  The music suggests a kind of kinetic energy that demands physical expression. The BBC NOW played with such muscular animation, that the piece seemed to levitate, infinitely more interesting than the rather generic images evoked in the titles.

Thus we were prepared for the explosion that is B Tommy Andersson's  Pan. What a showpiece this is, making full use of the Royal Albert Hall organ and the sense of occasion that is the essence of the Proms.  Grand fortes suddenly transforming into delicate ppp's, from which a solo violin emerges, lit by bell-like sonorities, introducing a lovely flute melody. This is Pan, doing his individualist thing, surrounded by nature. Yet Pan is part man, part goat, and symbolizes animal instincts. So the music rises to riotous crescendo, the organ (David Goode) dancing joyously with the orchestra. Gosh this was good fun, and very well executed too. On a First Night, this would have knocked the audience out, in a good way.. Pan is a welcome change from the corporate mediocrity that curses so much newly written but not new music at the Proms

The BBC NOW's new, punchy liveliness paid off handsomely in Nielsen and Andersson but worked less well for Mahler's Symphony no 4. This symphony isn't, as once described, a "vision of heaven for Catholic omnivores". The text refers to physical,pleasure. food and plenty, but the protagonist is a dead child.  Please read my article "Why greedy kids in Mahler 4" here.

This symphony is so very different in character from Aladdin and Pan that Søndergård  and the BBC NOW took a while to get into their stride. There wasn't much sense of direction in the first movement, though the demonic sforzando quirkiness in the scherzo was  well defined, as were several incidental details. There's no reason why this section shouldn't sound jolly, as it's marked behaglich. The soloist, Clara Ek,  has sung this many times with Bernard Haitink, who also favours the womanly warmth of Christianne Stotijn.  Ek's vibrato enriched her performance but I would have preferred something more elusive..