Why I could not write up Raymond Yiu's Symphony before now 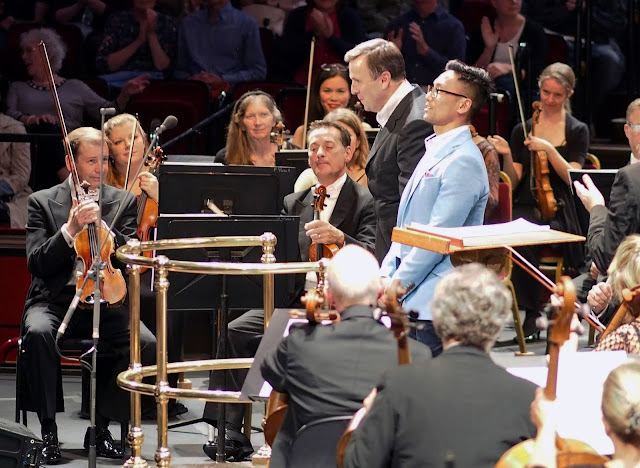 It's taken me two weeks to write up the Prom where Ed Gardner conducted Britten, Nielsen, Yiu and Janácek.  Listen to the repeat broadcast HERE)  I was busy covering FX Roth (Boulez, Ligeti, Bartók)  and Oramo Sibelius Kullervo, but the real reason was that Raymond Yiu's Symphony moved me on a very personal level.  It's not easy to write about things that still hit a raw nerve, even after half a lifetime. But it's absolutely vital that music like this is being written. Many congratulations to whoever in the BBC commissioned this. It takes courage to programme something like this piece which deals with subjects that do matter and continue to resonate.

Yiu's Symphony, though contemporary, springs from the tradition which inspired Britten and Gerald Finzi.  Literary sources are chosen with erudition, and incorporated with other musical references to create a highly individual and original piece which is not song symphony so much as a concerto for countertenor and orchestra.  And why countertenor?  Andrew Watts will "own" the piece for posterity, since the writing follows the unique qualities of his voice. But other countertenors should attempt it too, and soon, because there are few pieces which apply the unusual timbre of the Fach with such thoughtfulness and feeling.  The countertenor voice is unique,and beautiful for the very reason that it sounds as though it were coming from another plane of existence. It's hyper-natural, transcending ordinary reality. It can express, obliquely, things that can't be fully articulated in a mundane world. There has been a lot written for the voice type in recent years, but Yiu's Symphony is unusual in that the countertenor voice is the protagonist - strong, resolute . As in baroque times, the countertenor is hero.

Yet, crucially, a hero who has lived. "I play not marches for accepted victories only, I play marches for conquer'd and slain persons", Watts sang. The word "music" recurs, in slightly different forms, sometimes with the last "c" stressed forcefully, suggesting the "k" of old spelling, connecting present to past. The second movement has a descriptive title "String with Cadence multiply Song" which is confusing, but there's no question what it means in purely abstract terms. Sharp rushing series unfold in short cadences, interspersed with incident: sudden flashes of brilliant light, quietly plaintive violin and flute. "Come back, often and take hold of me", Watts sang. The quotation is from Constantine Cavafy and refers to the way memories connect to physical sensations "when the lips and the skin remember and the hands feel as if they were touching once more".

The fourth movement, quoting Thom Gunn's poem "In Time of Plague" refers explicitly to AIDS and the way it wiped out a generation - the talented, the talentless, interesting people and homophobes locked in the closet.  Someone at the epicentre,  who survived, described himself now surrounded by ghosts. The non-vocal writing in this part is sensitively sensual and rather beautiful. There are echoes of Scarlatti (for reasons deeply personal to the composer) and to the music so many danced to in the club scenes of the 70's and 80's.  It all seems so innocent now. Yet there was so much bigotry then that people would cross the street to avoid "contamination". That bigotry might yet resurface: we must never forget compassion and human suffering, in any form. The poem in this section isn't much, but the music is good, and evokes a whole lost world.

The final Adagietto con affecto quotes John Donne "The Anniversarie". The words are simple, and the musical setting dignified and austere, yet warmed by human feeling.  The orchestra rises in crescendo, which then dissipates into delicate textures. Watts sang "Only our love hath no decay".tenderly, rising to a poignant cry on the word "Yesterday".  An exquisite extended coda which suggest moonlight, stars and the triumph of caring emotions.  Afterwards, the lady next to me, who didn't normally do classical music, remarked on its beauty. There can be few tributes more sincere than that!

A wonderful Carl Nielsen Flute Concerto (1926) with the effervescent, sensual playing of Emily Beynon, a rather straightforward Britten Sinfonia da Requiem (Op 20, 1940) and a sassy Janácek. Sinfonietta ((1926); altogether a good Prom with Gardner and the BBC SO. We can hear the last two any time, and we ought to hear Nielsen's Flute Concerto more often, but it isn't every day we hear something as singular as Raymond Yiu's Symphony.