Pavel Haas and Hugo Haas : brothers from Brno who led very different lives.   Pavel, the composer, was incarcerated in Terezin and murdered in Auschwitz. Hugo, a movie star and director, far more famous in his time, was able to escape and start a second career in Hollywood. Both brothers seem to have suffered a strange afterlife in that their reputations are miscontrued. Perhaps it's the way English language sources have dominated the internet, distorting reality.

From 1919 to 1921, Pavel Haas studied at the Brno Conservatory of which Janáček  was Director. Even in those early days,  no Czech composer could fail not to be influenced by Janáček,  but any decent composer finds his or her own, original voice. Pavel Haas's String Quartet no 1 (1920), suggests that Haas was well aware of the avant garde in other parts of Europe. Janáček wasn't a cuddly personality.  Read here what Haas said of him. Haas wrote mainly chamber music and songs. My favourites are the String Quartet no 3 and his Four Songs on Chinese Poetry (1944), though look under the label "Theresienstadt" below for more.

Hugo Haas started in the movies in 1925 and soon became a matinee idol, involved with, literally, dozens of movies of all kinds. Many of these films are still highly regarded and available, but you'd have to check Czech language sources to find them, since the English-language media seem to ignore them altogether.  Although I don't speak Czech I used to follow them well enough because the acting and direction was so vivid.  Perhaps the most remarkable of Hugo's many movies was Bílá nemoc, or The White Plague  This was made in 1937, when Hitler was threatening Czechoslovakia, but the rest oif Europe didn't seem to care. The script was by Karel Čapek, who also wrote the play on which Janáček based The Makropulos Affair. In that "Czech renaissance" (1914-1938), the arts were very much in the vanguard of social progress. And the music score was by Pavel Haas.
.

In Bílá nemoc,there's a sudden frame of a man in the howling mob outside the Dictator's palace (which is monumentalist Art Deco and filled with geometric symbols) . It's Dr Galen (Hugo Haas). There's a mysterious plague in the country, which starts as white spots on the body and kills everyone it touches. Everyone's paranoid about contamination. Galen has a cure but he's not allowed to use it because his political terms are too high. So he's only allowed to treat the destitute in Ward 13, who don't count. But those he treats, survive. Gradually the plague spreads, and the paranoia. The Dictator visits the research hospital but Galen isn't allowed near him. Galen is anti-war, and that's another form of plague. Eventually, Baron Krog, the second most powerful man in the land, gets sick and is saved when he promises to respect Galen's ideas. Galen meets the dictator. Both of them fought in the Great War, but the Dictator believes war is a good thing and Galen thinks otherwise. Soon, the Dictator gets infected too, has a change of heart, signs ceasefire documents, and summons Galen. Galen tries to pass through the howling crowds, but they confront him when he talks anti-war and they beat him to death. No-one now to stop the plague, or the war. And of course, we now know what happened when Hitler marched in a few months after the movie was made. 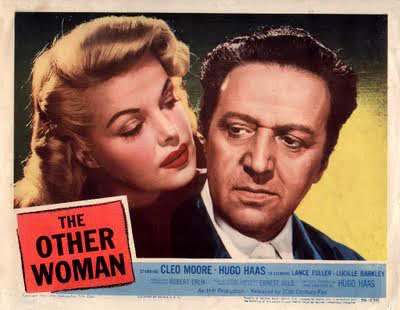 Being prominent, Hugo Haas was able to escape, while Pavel didn't. Via Austria and Portugal, he arrived in Hollywood where he had to begin all over again as an actor of small parts, though he had been a very experienced director and producer. Eventually he found a niche in smaller studios where he made films which are only B movies because their budgets were small. Many of them have the characteristic flavour of his earlier career when he was as big at the box office as the glitzier stars of Hollywood.  Watch, for example, The Other Woman (1954) in which Haas plays a film director who *used to be something in Europe", as an extra whispers. His boss insists he should be more "American". "Movies for kiddies?" snorts Haas in contempt. He gives a wannabe a chance, but when she blows her lines, she blackmails him. She's a  twisted loser but destroys him. Eventually she's found strangled, but by then Haas's life is ruined. The last frame ends as the first, where Haas is seen screaming from behind bars. First time round, he was showing actors how to emote. this time, it's him behind bars for real.

Pavel Haas made movies, too, since he wrote several film scores for Hugo and the Czech cinema industry. Ironically, the film in which he actually appears, as himself, was the Nazi propaganda film glorifying the joys of Theresienstadt. He conducts his Study for Strings with an orchestra made up of camp inmates. The fragment is short but potent - the kinds of  "modern" music Nazis don't like. Hugo's son Ivan,incidentally, appears in Hugo's later films, in small roles. Maybe he gets overlooked, but not by those who care about Hugo and Pavel Haas and the world they knew.
at September 29, 2015