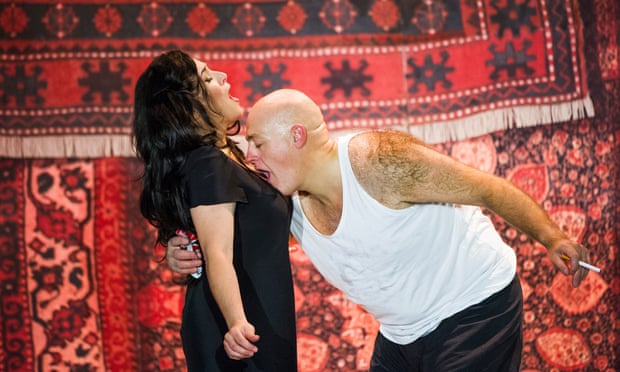 It took artistic courage to choose Shostakovich Lady Macbeth of Mtsensk to start the ENO's 2015-2016 season.  Shostakovich isn't an easy sell, and so full of sex and violence that some minds - like Josef Stalin - would be aghast. But Mark Wigglesworth is passionate about Shostakovich , and as new Music Director of the ENO, he's making a point. Good opera needs artistic vision.

Shostakovich's plot, derived from a short story by Nikolai Leskov, revolves around a frustrated young wife,  Katarina Lvovna (Patricia Racette) who is bored out of her mind in the house of the Ismailovs.  Dmitri Tcherniakov's staging shows her in a box, isolated from the world of business around her. It's a good concept, and solves practical logistical problems but doesn't vary much. In the final act, the box becomes a prison cell. Katarina's been in a cell all her married life, though once it was draped in fancy carpets. It's a valid concept, but unvarying, and doesn't quite capture the savage turbulence of a society where most people are trapped in some kind of emotional prison.  Boris Timofeyevich Ismailov (Robert Hayward), the head of the family, is a boor and a bully, who'd rape his daughter in law if he could.  Significantly, he's a rich man whose power means he can get away with anything, until he crosses Katarina.  The undercurrent of subversion that runs through Shostakovich's operas is integral to their meaning. Everyone is poisoned in a society based on power based on brutality. Lady Macbeth of Mtsensk, easily the finest of Shostakovich's many satirical operas, is much more than one woman's story.

Perhaps First Night nerves inhibited the performance of the first two acts. While Wigglesworth drew thoughtful playing from the ENO orchestra, the music didn't ignite until the last two acts, where Shostakovich wrote music so dramatic that it brought out the inner intensity of the opera far more vividly than the somewhat tentative staging. The off-stage brass weren't just for show. They operate as part of the audience, like voices in a crowd, whose comments might otherwise be suppressed. In these two acts, Wigglesworth made his mark.  The playing became violent and extreme, all inhibitions freed. It's not for nothing that the libretto keeps referring to alcohol, which stifles pain, but eventually breaks down social order. The all-important orchestral Interludes blazed with conviction, so well played that the nominal action on stage felt largely irrelevant. Had the singing been of the same standard, this would have been an evening of great music.

Unfortunately the ENO budget does not run high enough, and might shrink further, given the stranglehold of Arts Council England's "special measures". The best singers don't need to learn a role in English because their careers are international. Yet there is an increasingly strong case for opera in the vernacular. Now that most people know basic repertoire from recordings and DVDs, the experience of live opera is even more important. It adds extra perspective. When audiences hear opera in their own language, they can focus on the feelings and emotions behind the sounds. Opera in the vernacular is not a substitute for the original language but offers a different focus.  If the government of this country were serious about culture "for the people" it would recognize the value of the ENO,  the flagship for opera in English,. It's also a unique training source for singers whose native language is English.

Much depends, however, on the quality of translation.  Some ENO translations have been brilliant, like The Mastersingers of Nuremberg, and The Girl of the Golden West, which in English is even funnier than in Italian.  David Pountney's translation of Lady Macbeth of Mtensk matched the idea of crude banality which runs through the libretto,  but could have used more wit and bite.  Even this might have worked had the singing been of the high standards of the orchestral playing. Part of the reason lies in the Personregie or lack thereof.  The production premiered in Düsseldorf in 2008. It could use a re-charge.

Patrica Racette is an ENO favourite because she;'s a big name in the United States, an important market for the ENO. She sang Katya Kabanova five years ago.  At first, her voice didn't quite project through the stalls, so I don't know how it carried further up in the house. At moments, she rose to the challenge of a diffucult and demanding role, but generally the portrayal didn't capture the full  breadth of Katarina's personality. Since Tcherniakov's concept of the opera seems to focus on Katarina rather than the world around her, this put added pressure on Racette.

John Daszak sang Sergei, the handsome hunk who relieves Katarina's sexual frustration but ends up a victim like everyone else.  He certainly looks the part, and we get to see his behind (or more likely that of a body double).  He sings forcefully, and in the final act, creates a sense of genuine outrage. His seduction of Sonyetka (Clare Presland) is an act of violence against Katarina as much as pure animal lust. Nearly ten years ago, the Royal Opera House presented Lady Macbeth of Mtensk  with Eva Maria Westbroek and Christopher Ventris in the leading roles.  Those two had real chemistry together. They lit up the production (by Richard Jones) by the sheer committment of their singing. In Tcherniakov's staging, the copulation is simulated, routine rather than vocally dangerous with little erotic charge..

Quibbles aside, this Lady Macbeth of Mtsensk was a good start to the ENO season. One hopes, though, that the vision that animated the ENO will once again return.