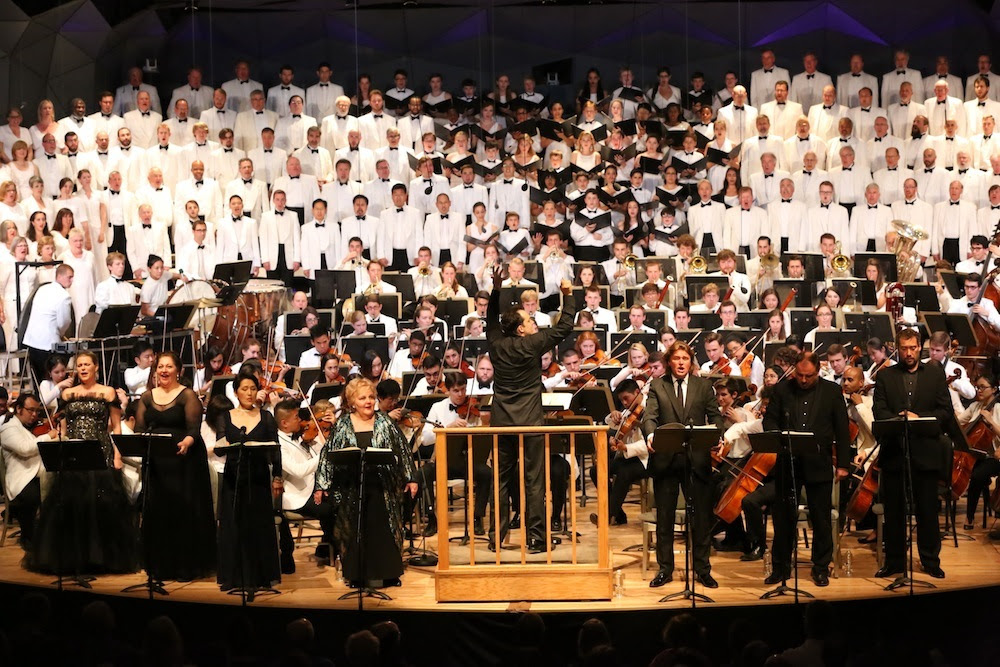 Now available on livestream here, Mahler Symphony no 8 at Tanglewood. Andris Nelsons conducts the Tanglewood Music Center Orchestra.  The set of soloists is so good that it will remembered for a long time: Erin Wall, Christine Goerke, Mihoko Fujimura, Jane Henschel, Klaus Florian Vogt, Matthias Goerne, Ain Aigner and Erin Morley.  Most of them are Mahler 8th veterans but Goerke, Goerne and Vogt stand out. This is seriously luxury casting. I think it's Goerke's role debut, but she's so good that she's bound to make it part of her repertoire.

Nelsons conducted the Tanglewood Music Center Orchestra. No youth orchestra will ever have the finesse of a professional orchestra of seasoned players, but in the open air ambiance of Tanglewood, youth and freshness are an advantage. I loved watching the concert on video, seeing how intently the players were performig, and putting their hearts into what they were playing. As Claudio Abbado has said, music-making begins with love. If these young players love what they're doing, they are well on the way to becoming good musicians. The choruses, too, were "homegrown",  again not at all a disadvantage. Very few large choirs are fully professional, and what these singers may lack in polish they make up for with enthusiasm.  Twice, when I've heard Mahler 8th live, the performance came awry because some of the choruses drifted apart from the others and the conductor. This symphony is notoriously difficult to conduct so it's a credit to all that they listened to each other and to Nelsons.

The tag "Symphony of a Thousand" was invented by concert promoters , not by Mahler himself. Although vast forces have impact, musical considerations come above all else. Mahler himself said "“So far I have employed words and the human voice …….to express symphonically only with immense breadth......But here the voice is also an instrument…….used not only as sound, but as the bearer of poetic thoughts”. I've heard this symphony twice at the Royal Albert Hall, and once in a sports stadium nearly twice the size of the RAH.  What matters is how it is performed.   Numbers aren't as important as quality. The old saw "Never mind the quality, feel the width" applies. Here, the balance sounded right, so one might contemplate "poetic thoughts" without being overwhelmed.

On the live audio-only broadcast, the First Part and the Second Part were separated by an interval. I was quite shocked, since there isn't supposed to be an interval.  The silence between the parts is structurally important,  serving as a  limbo state  between the "earthly" aspects of the first part and the much more spiritual conclusion, limbo inn this case referring to the transit from death to afterlife in Christian liturgy, a sort of "clearing space" so things move on. The silence doesn't have to be defined, but it has to be palpable.  Significantly, there are no voices in the first part of the second part. Ideally we should listen and intuit our own "poetic thoughts". When Nelson's conducted  his legendary Mahler 8 in Birmingham in 2010, he conducted it without an interval  So why the interval at Tanglewood ?

What  I liked about this performance was its friendly atmosphere.  Again and again, the text refers to light, and to thoughts rising upwards, beyond the restraints and preoccupations of the temporal world.  When the Mater Gloriosa appears, way above the stage, she represents a higher level of existence, more luminous and humane. This  Tanglewood Mahler 8th bodes well for the future.
at September 01, 2015