One hundred years ago today, George Butterworth was still alive. On 5th August 1916, his body lay dead on a battlefield in the Somme.  He was leading a party of men on a sortie up Munster Alley, when  shortly before 4.45 am on 5th August 1915, he was shot in the head. The best authority on Butterworth remains Michael Barlow's biography "Whom the Gods Love". This an invaluable source, much of it  drawn from family letters (now in Oxford)  and material at Cecil Sharp House. Curiously, though, there's little in his book on Butterworth's war record, since her relied on papers collected by Butterworth's father.  Since  nearly everything about officers in the 1914-1918 War was documented, I went to the War Office records thinking his details would be easy to trace. Then  I hit a brick wall. No Lt. Butterworth! No wonder Barlow was stymied

Next step, then, was to go to the list of medals which are carefully documented.  There, I dound that Butterworth had enlisted as "Kaye Butterworth!"   He'd only been awarded one Military Cross, not three, but that's still an important achievement since MC's are not handed out except in exceptional cases.  Although I didn't access the main regimental records, which aren't in London, I did find the original War Diary of Butterworth's Regiment, which is a moment to moment record of what was happening in battle, written down verbatim as the action was happening. War Diaries are primary material. They're sent to higher command behind lines so the generals can follow what's happening on the front line. Sometimes these diaries are written on scraps, sometimes in pencil and sometimes they're stained with mud and darker substances.  And here is what I found :


2.53 sent following message to Lt Butterworth at B Company "Send a strong bombing platoon up Munster Alley to hold and block". Note owing to our artillery shelling our front line Lt Butterworth cannot have received this message until after 3.45 am
3.40 received from Lt Clarke "we must have reinforcements at once...the men I have got are being kept there by revolvers". 3.41 gave Lt Batty message for Lt Butterworth to reinforce Munster Alley with one platoon at once.
4.19 Forward observation reported that our party at Munster Alley was being heavily bombed but we were apparently holding our own. 4.43 (Brigadier sent 25 men from another unit to relieve)
4.45 Lt Butterworth killed.
Casualties 5th August : Lt G S Kaye-Butterworth, Lt N A Target killed, 2nd Lt Rees
and Batty wounded. Other ranks : 4 killed. 18 wounded, 3 shell shock, 5 missing.
(Note: the unfortunately named Lt Target featured in the Diary many times. He seems tto have been a charismatic fellow who had been awarded a Military Cross in June. He was much admired by the Brigadier and the man who wrote the diaries. Butterworth would have known him too.)
Plenty on Butterworth on this site, please explore.  Including

The  photo at the top shows the officers of the 13th Durham Light Infantry  The man circled is supposed to be Butterworth.It's possible since we know the Kinora films and Morris dancings stills that Butterworth was short and self effacing. Below, Butterworth second from left, in 1912. 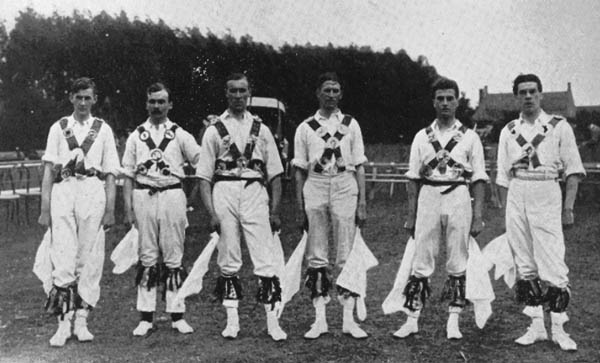