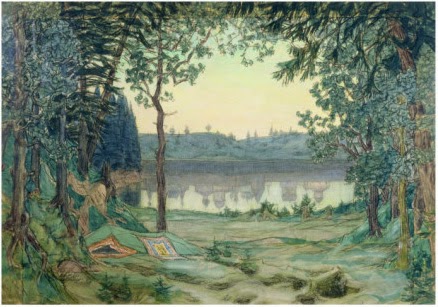 Rimsky-Korsakov The Legend of the  Invisble City of Kitezh at BBC Prom 71 should have been a splendid occasion, with Yuri Temirkanov. conducting the St Petersburg Philharmonic Orchestra. In the opera, the Princess of Nature and the woods, Fevronia, has come to Kitezh to marry Prince Yuri. But the Tatars are about to attack the city. So Fevronia uses her magical powers to disguise the city and make it invisible. Except on the shore of the lake, where it's reflected in a blaze of glory, its bells ringing elusively. When Gergiev conducted the full piece in London some 20 years ago, it was a sensation. Later I heard the Svetlanov recording. Two very different approaches, but both hugely rewarding, Gergiev getting the edge for bringing out the demonic undertones in the piece. At this Prom, Temirkanov conducted only 13 minutes of the Suite, so we didn't have much to go on, apart from the surface beauty, bird calls, harps, strings, and the lovely wind melody. The rolling drums and muted trumpets suggested dangers to come. Perhaps the City was invisible after all. The photo shows a set design from the original production in 1907. Note the art deco clarity in the design.

More vividly performed, Tchaikovsky's Violin Concerto, in D major Op 35 1878 with Julia Fischer as soloist.  Lyrical playing, nicely contrasted with the dynamic assertiveness in the orchestra. I enjoyed the way Fischer let her lines slide dizzily downward, as if the instrument were flirting with larger forces.

How I wish commentators and the media would get over describing everything in nationalistic clichés!  To some extent it's fair enough to describe things as "Russian" or "English"  As shorthand the terms are fair enough, and sometimes do apply,  but good music is greater than perceived boundaries.  Misplaced nationalism leads to lazy thinking and things far worse.  Beware!

Edward Elgar's Enigma Variations Op 32, 1899, don't define "Englishness" whatever that might mean, except by familiar association.  The variations describe friends and what they meant to the composer. Of course the work sounds "Elgarian". It's Elgar, with his characteristic warm sweep and expansiveness. "Enigmas" are important in Elgar, but they are just that: "enigmas". For example, in the Rondo to his Second Symphony, Elgar wrote "Venice and Tintagel" which clearly meant a lot to him, and are important to interpretation, but they could mean many different things. It's up to the conductor and listener how deeply one can penetrate.  In the Enigma Variations, clues abound, and tantalize. We can't dismiss them but neither should we be trapped by them.  The variations are not fixed portraits as such but, rather, the way different friends might comment on a basic theme.

Temirkanov's Enigma Variations were executed with graceful elegance, suggesting the good-natured aspects of the composer's personality.  Lovely warm strings, played with the equanimity Elgar so valued. No-one "has" to be English, Russian or come from Mars to get that. Temirkanov and the St Petersbug Philharmonic Orcehstra are good, so they sound good.
at September 09, 2015