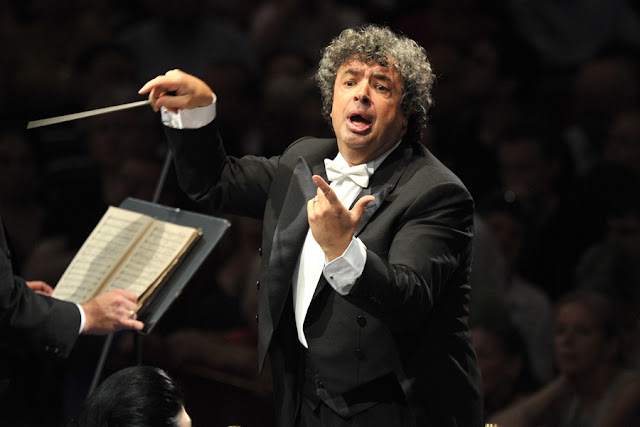 In Prom 73, at the Royal Albert Hall, London, Semyon Bychkov conducted the Vienna Philharonic Orchestra. The  VPO are so good that they don't need a Chief Conductor. Music seems to flow from them, channeled and shaped in partnership with those who have conducted them. Their aura is unique, built upon flawless technique and innate, intuitive musicianship on all levels.  Claudio Abbado, who conducted them regularly, once said "Music is an ongoing process, a constant quest, a quest for new forms of music-making, a permanent state of enrichment."  Listening to the Vienna Philharmonic is proof, if any were needed, that dedication and vision of this calibre refreshes the soul. 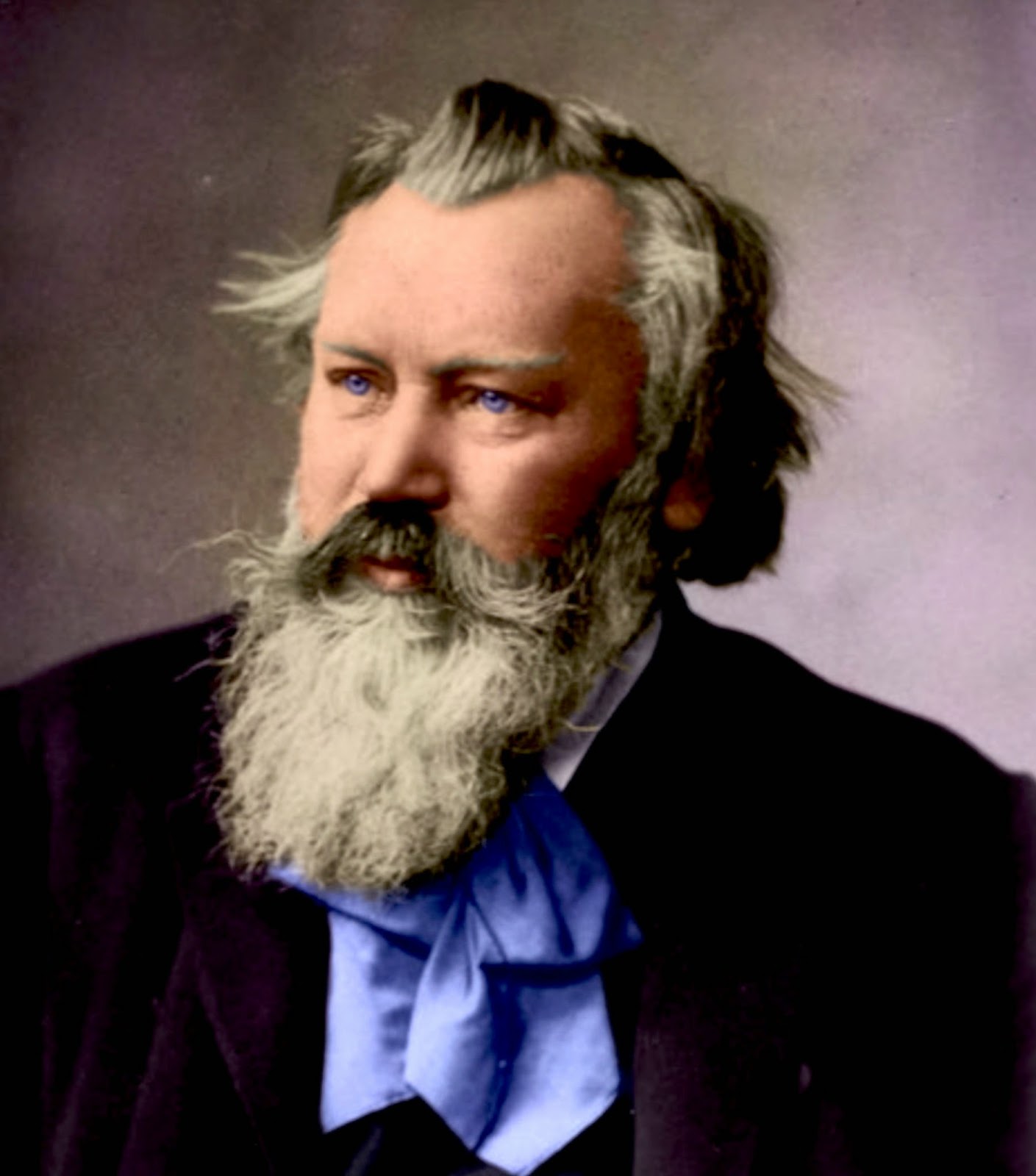 In the opening movement of Brahms Symphony no 3 Op 90, 1883, Allegro con brio, the motif at its heart was clearly defined. "Frei aber einsam", Free although alone. the confidence of a protagonist mature enough not to need to prove anything. This symphony is a model of restraint, each movement returning to quiet understatement.  Bychkov and the VPO shaped the long keening lines in the second and third movements so they seemed to express a melancholy longing for something which might never be regained. One hardly needs to know the Schumann connotations when the piece is interpreted with such insight and sensitivity. Thus the intense figures in the final movement were marked forceful, sharp stabbing rhythms suggesting determination. Trombones, horns and bassoons, instruments with big voices, yet played with sensitivity.  Lovely  as it was with the VPO, they understood that this Allegro isn't "light", but carries deep emotional undertones. Listening link HERE.

It was a great pity that the performance was spoiled live in the auditorium because after the first movement the ushers let in large numbers of people who hadn't checked  that the Prom started at 7pm not 7.30, yet were allowed to enter the hall noisily, disturbing others who had come for the music. It didn't help that Bychkov seemed to be under the weather, mopping his brow a lot, but that is his privilege. Audiences who actually care about music listen, and shouldn't burst into mechanical applause at every pause. Serious music isn't TV talent show, it doesn't depend on mindless approval. Ironically, this "audience participation" reinforced the insight  in the Bychkov/VPO  interpretation.

It was a wise choice to pair this Brahms 3 with Franz Schmidt's Symphony no 2  (1913). Comparing a composer to one more familiar is fair enough, but it's far more important to listen to music for its own sake.  The better the composer, the more individual he (or she) will sound.  This symphony is most certainly not a pastiche. Ultimately labels close minds and ears.  Schmidt was very much an individual of his time, cognizant with a wide range of others.  Although this particular symphony isn't as well known as the superior "Book of Seven Seals", Schmidt's Symphony no 4 was a huge success at the Proms  in 2000. Schmidt is not obscure and was very much a part of the period in which he was active. Bychkov clearly loves the piece and conducts it with such enthusiasm that he makes it convincing.  He's been conducting it everywhere in the last few years, even leading the student orchestra of the Royal Academy of Music in it last March. When, not if, he records this, it will become the version to get hold of.

Schmidt's Second Symphony spans three movements. The first movement, marked Lebhaft, was lively, with an interesting interplay between confident brass and  playful strings and winds. The VPO played the expansive lines with a great sense of freedom, and the pastoral passages shone with lyrical grace. In the hands of lesser performers  one might detect an uncertainty in the resolution, but with Bychkov and the VPO, the sound is so gorgeously rich that one can luxuriate without worrying too much.  The second movement,, marked "einfach und zart" (simple and tender) is a series of variations, each quite distinctive. Bychkov and the VPO kept tempi flowing, to accentuate the spirited exuberance. Do we hear the ghosts of the Johann Strausses (Not Richard) ? The final movement begins with an impressive brass and wind chorale, which gradually grows to introduce a variation on the woodwind theme in the first movement.  Listening link HERE.

In the final coda,the fanfare surges again, a blaze of glory,played with such richness that it would be wrong to quibble about emotional depth.  Rather like, I thought, the last gasp of the old world before it was annihilated in 1914-1918. Far too much nonsense has been written about Schoenberg forcing music into modernism.  It was the War What Did  It!  And the Nazis, and the inexorable process of artists responding to the times they live in. The twelve tone system opened up new possibilities, it didn't suppress anyone.   The huge variety of styles which proliferated in the 1920's, 30's and beyond is clear evidence that composers can do their own thing. And thus, we return to the singular depth of Brahms Symphony no 3 as revealed by Bychkov and the Vienna Philharmonic Orchestra.

Coming up next - The Vienna Philharmonic Orchestra in a brilliant Elgar Gerontius
at September 12, 2015

Sceptic with a C said...

Harold Truscott only lived to complete and publish the first of a projected three-volume series dealing with Schmidt's music. This first volume, published by Toccata, deals with the orchestral music, including the Second Symphony, and is certainly well worth reading, even if Truscott was highly idiosyncratic, strongly opinionated and always liable to fly off at wildly improbable tangents.

Far better for the serious student is Tom Corfield's "Franz Schmidt (1874-1939): A Discussion of His Style With Special Reference to the Four Symphonies and Das Buch mit sieben Siegeln", (Garland Publishing, 1989). The cumbersome and dry-sounding title will immediately alert the shrewd reader to the fact that this work originated as a PhD. dissertation (submitted, in fact, to Cambridge University in 1985), but the book itself is not dry in the least; it is beautifully, flowingly written and full of knowledge of and insight into not merely Schmidt' own music (which was little known in England at the time) but of the entire mainstream repertoire from Bach to the 20th century.

Many thanks ! And much truer to Schmidt thann the marketing rebranding that seems to be happening these dyas