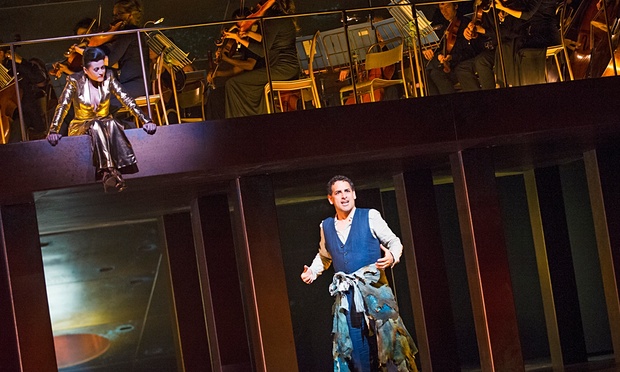 Christoph Willibald Gluck Orphée et Eurydice at the Royal Opera House.  John Eliot Gardiner conducted the English Baroque Soloists and the Monteverdi Choir, so musical excellence was  absolutely guaranteed. More surprisingly, the production itself broke new ground, for it connected the music, the singing and the dancing into a stunningly integrated whole. This takes vision. In its own time, Orphée et Eurydice was ground breaking, introducing radical reform to the genre. Gardiner and the Royal Opera House know their music history and have the artistic vision to bring Orphée et Eurydice back to life in a production as audacious as this.

Orpheus journeys into the Underworld. He doesn't save Eurydice but finds music.  Orphée et Eurydice  is an opera about abstract concepts, so abstract expression is of the essence, just as it would have been in Greek drama. The narrative unfolds through music, in different forms and on different levels. Hence John Fulljames and his designer Conor Murphy uses the whole performing space at the Royal Opera House, placing the orchestra centre stage. Even when it's barely visible, partly hidden in a pit, it's absolutely present at the very heart of the production, fundamentally true to its spirit. A production for those who actually "get" that opera is music.

Music leads us out of the total darkness representing "le tombeau de Eurydice". Hence the gloom that overhangs the structure from which the singers emerge. The  columns represent marble pillars, yet also the forest of tall trees, depicted in many paintings because they, too, are symbolic.  The music suggest ceremonial dirge, a hymn in the style of Classical Antiquity familiar to Gluck and his audiences. Gardiner respects the solemn pace, from which Orphée will emerge. This opera is Orpheus's journey, and one which he has to make alone, hence the"concert performance" emphasis on Orphée, which is vital to meaning.  Although the role was conceived for a castrati, and is usually now cast for mezzo, here we had the French version.  Juan Diego Flórez has the dramatic presence to carry it off. His long Récit at the end of the First Act felt emotionally convincing.His timbre also highlighted the frilly decorations in the part of  Amore (Amanda Forsythe).

Love is also an erotic force. Flórez and many of the male dancers wear pantaloons not unlike the fleeces which shepherds draped around their waists. Significantly, Pan, too, was a shepherd an element of mythology which would have come as second nature to Gluck's audiences raised on Greek classics.  The dancers of the Hofesh Schechter Company, choreographed and directed by Schechter, moved with animal-like physicality, wildly gesturing yet precisely in time with the music. Gardiner whipped the orchestra to near frenzy, expressing shocking portent. No mortal has ever defied the natural order of life and death. Even Eurydice (Lucy Crowe) demurs. The natural warmth of period instruments driven hard like this creates tense contrast, also very much part of meaning. The instruments are vulnerable, like mortals, but their playing is heroic, all the more to be admired for that. Gardiner reveled the fundamental connection between baroque music and dance. Precision is of the essence. Dancers, like musicians, don't approximate gestures if they are any good. What a joy it was to watch Gluck's music come alive in physical form !

It was wonderful to watch how the nymphs and shepherds of the Monteverdi Choir walked among the dancers of the Hofesh Schechter Company - mortals and mythic, almost non-human elementals brought together by the miracle that is music. I don't know who the dancer with the dreadlocks was, but he danced like a Fury. Is he an alter ego to Orphée and perhaps a hint of Orpheus's eventual fate? Orpheus enters the Underworld for good when he's ripped apart by demons. So many layers of meaning, opersting together, united by music. In the harp we hear the lute with which Orpheus will find his destiny.  Lights shone from above, channelled at first through small apertures, like sunlight. Then the whole stage, singers, dancers and orchestra were all illuminated in golden light and burnished tones of antique copper.  Orphée doesn't save Eurydice, but when he re-enters the world, he's found his mission.

Get to this. It runs until 3rd October. It's like nothing else you're likely to experience in a while.
at September 15, 2015