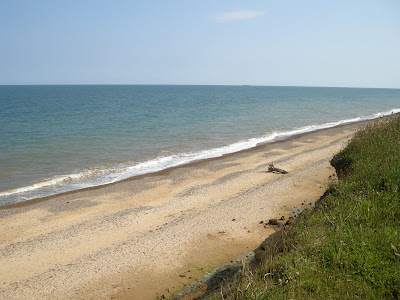 Nearly every year at Aldeburgh, Bach's Mass in B Minor gets an outing because it's perfect for Snape. This year, John Eliot Gardiner conducted, guaranteed to sell out within hours. Car park packed with tour buses, full of Bach Mass fans. But the wonderful thing is, many of the Bach Mass crowd came hours early, and heard Pierre Boulez talk to Pierre-Laurent Aimard. They stayed for the concert after the talk - Boulez Incises for Piano, Sonatina for Flute and Piano and Elliott Carter's Duo for Violin and Piano (Dimitri Vassilakis (p), Emmanuelle Ophèle (fl) Hae-Sun Kang (vn))

What's more the Bach Mass Crowd listened attentively. No-one brainwashed them into thinking "Difficult is Dangerous". Maybe they didn't all get it, but they were prepared to listen and think for themselves.  Surprisingly warm applause!  Maybe this audience related to Boulez because he's their own age group, but it felt sincere. A million times better than the stagey fake applause that happens in some places where people think they're proving something by standing up to clap, even for rubbish.

Boulez isn't the demon some sensationalists make him out to be. Nadia Boulanger hated everything about him,. One of the reasons for the schism in American and European tastes springs from Boulanger's jealous antagonism to Messiaen and anyone who might challenge her view that early Stravinsky was what modern music should be. Including Stravinsky himself, later on.

French music's always been different from Austro-German music, said Boulez, and the Nazis weren't going to promote modern music. So French musicians were isolated, especially during the Occupation, when Boulez was studying with Messiaen.  He learned Webern from scores, also hard to come by. Hans Rosbaud was his mentor, indeed, it was Rosbaud who asked Boulez to conduct at short notice when Rosbaud fell ill. Boulez took the train to Germany, and started another career. Learning from the score has been Boulez's mantra ever since. That's why he set up Domaine Musicale, so new music could be performed by top musicians who cared about it. From Domaine Musicale to Ensemble Intercontemporain, and to IRCAM.

Boulez talked about John Cage "from whom I learned so much", about American poetry and painting, which influence his music. Boulez's knowledge of European art and literature is formidable, though he didn't mention it in the talk.  He gave up on serialism and other isms decades ago, "It was too boring. Why twelve tones when you can have so many other possibilities?". But Schoenberg showed the way. Boulez and Aimard discussed various works, Le marteau sans maître, the Piano Sonatas, Cummings ist der Dichter.  They could have gone on much longer, but even at Aldeburgh, time schedules intrude.

Later, there was a screening of the film, Piano du xxe siècle, where Pierre-Laurent Aimard talks through Boulez Piano Sonata no 1, almost bar by bar, showing why it's so interesting. Aimard knows what he's talking about and is so enthusiastic it illuminates the full performance even if you already know the work. It's a wonderful film, made in 1985. lots of extras as background, like a shot of "Boulez's school report", Messiaen's comment on the official record of the Paris Conservatoire. "Un tel musicien! Il aurait un grand avenir."

The film is part of a series for French television, but is most certainly not dumbed down. Boulez, Messiaen, Stockhausen, Ligeti, each documentary filmed to enhance the music itself.  For this film, says Aimard, "we aimed for a risk taking element with the camera, keeping its movements  and gestures improvised, albeit prepared with the greatest of care in order to correspond to the extremely active and free gestures of the music".

Is that the secret of promoting music ? Not just new music, but all music. The film engages with a specific piece, describing how it works and how it came to be. Intelligence, imagination and freedom of spirit - just like the piece itself. No wonder Messiaen used this piece as basic teaching material.  He wanted his students to think,  and create original work. Those who hate  "difficult" music have only themselves to blame.
at June 28, 2010