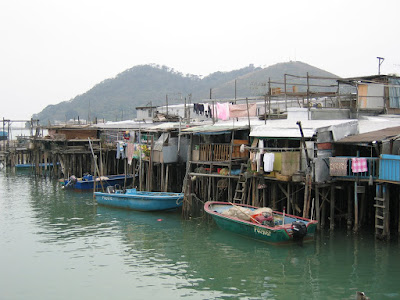 Three Bizet operas in one week, and another planned for October at the Royal Opera House. A great opportunity to reflect on what Bizet might mean to us now.

Imagine my shock when I went backstage  at the Coliseum for the ENO production of The Pearl Fishers and saw the set. Stilt houses, almost exactly like the fishing village where I spent a lot of my childhood. Serious karma.

Read what director Penny Woolcock says about ENO's Pearl Fishers. HERE. "At its heart is the love triangle. Such things cause pain and destruction. Then, there's the struggle between the villagers and the ocean. These people are very poor. They live in flimsy dwellings and are at the mercy of storms. And the burning of the village. If you think of the villagers as real people, with children, it's dreadful! So we're taking the story seriously, bringing out the dark undercurrents".

In Bizet's time, the exotic was a mask for feeling and ideas that might not be so easily expressed in polite society. Transferring extreme passions to alien cultures, which weren't "civilized", made them less dangerous. Leila's a sanctified virgin, who has to be veiled - cloistered - because that's how the local religion works. She's a prisoner to the system. Zurga burns down the village - mass murder for the sake of love.  And against this horror, exquisite, diaphanously beautiful music.That's Bizet's masterstroke,  Those who will be lulled see only the surface. Those who see beneath hear the real depth and power. "Manche schöne Perle in seiner Tiefe ruht" as Heine said. Pearl Fishers dive deep, they don't mess about in tide pools.

And what about Carmen? She's a femme fatale of a different order, violent and untamable. Nothing like nice Parisian ladies in Bizet's time (at least not in public).  Maybe her hypnotic allure stems from her being such a rebel. Maybe the men would like to be like that themselves, but they're too repressed. In the Opera Holland Park production, Carmen grabs men by the balls, quite explicitly.

What does Carmen really, really want? Freedom, whatever that might be. Again, brutal violence, theft, murder, treachery and S_E_X, all against a backdrop of gorgeous music.  Like the interlude just before the criminals return from killing the people on the ship. It sounds like a hymn, but we know what's just happened.. Carmen's a nasty slut, and ends up dead. But somehow the "Carmen spirit" lives on. Mousy Micaela doesn't get Don José but she's travelled among brigands and survived.  Arguably, Carmen lives on and becomes..... Lulu!
Please also see Janacek's Dangerous Women
at June 01, 2010

I am sensitive to the way text and music in Carmen suggest a character that seems always looking forward "en devenir" : "peut-être demain" (and even Rodion Shchedrin in his fantasy named Carmen Suite finishes his parody with the music quoting "peut-être jamais", something like eternity), while others in the opera are from the first note desperately expecting something to happen "in their way", with the natural heartbeat of predators waiting for their new prepared prey. For me Bizet brings back the greatness of French tragedy like Racine, it could be a "Prélude à l'après-midi d'un fauve" too, with greater concision suggesting quicker pacing as the opera flows on. But she accepts the sacrifice, she throws herself into the arena to face death. I think Bizet did something like that in front of "his" public of Opéra Comique, this could not work like consumary art. Ironically, Carmen seems so natural today. I thought that if Carmen survived in music she may have been ultimately the woman in Schoenberg 's Verklärte Nacht where the music seems to convey the fears and the treachery and obviously the wound. You hear no apocalyptic trumpets here or threat from the paradise but an incredible will towards a renewed humanity.

Wonderful comments, Olivier ! You are always so [perceptive. We both see the tragedy behind places that to9 tourists seemm only beautiful. Read more on Olivier's EXCELLENT blog De chez toi, follow the link on the right of this one. Plenty of material you cannot get anywhere else, Rumania, Mumbai, Leipzig etc.

just came across your blog while searching for more info on "Wild Wild Rose." am loving your selection of Chinese music and movies so far. And you grew up in Tai O??? Tai O is my favorite place in all of Hong Kong!

Hi Victoria, I know Tai O well, but spent my summers in Sai Kung as did my dad and grandfather. Nearly 100 years! Of course that was when it was real fishing village, people lived on boats and stilt houses. No road from Kowloon. Please let me know what else you'd like me to do on this site as there is so little in English about Cantonese art and culture. And what is in English is so Eurocentric.