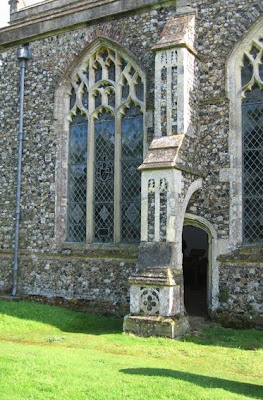 Early music is as much part of Aldeburgh as new.  The 19th century Austro-Gedrman tradition has shaped what most people think of as "music", but it's a relatively recent tradition. Think of western music from a wider perspective, and the straitjacket of what music "must" be starts to collapse.  So many modern composers have turned to early music for inspiration that it's a good idea to listen to early music in order to appreciate what modern music is coming from.

In some ways, the Huelgas Ensemble is the Ensemble Intercontemporain of early music. In France, early music is hugely popular and on a more adventurous scale. There's a renaissance in "modern" early music and new commissions, which has hardly touched the Anglophone world. In England, the closest we get is Exaudi, highly recommended! So when the Huelgas Ensemble came to Blythburgh Chiurch (top picture)  as part of the Aldeburgh Festival, it was special.

The Huelgas Ensemble, founded and conducted by Paul Van Nevel in 1970, grew from Schola Cantorum in Basle (where Andreas Scholl trained), so it combines scholarly erudition with extremely refined performance. Think of the great cathedrals, which were built with precision, long before computer aided design.

The Huelgas sang Clemens non Papa (Clement who wasn't a Pope), Orlandus de Lassus,  Thomas Ashewell and Nicolas Gombert, a programme of the 16th century when Europe was going through cataclysmic upheaval, the certainties of the Middle Ages being shattered by new ideas. The serenity and perfection of this music salved souls, if it didn't save them. The Huelgas's purity of tone and carefully woven harmony was beautiful. They didn't stand in rigid lines, but moved in a circle.. Singing in church was about filling space effectively. Later that evening, Pierre Boulez's Dialogue de l'ombre double showed how sound dynamics shape the form of music. IRCAM isn't all that far from the early music.

The concert is being broadcast on BBC Radio 3 online, on demand, internationally from 28 June for 7 days.

No wonder early music speaks to modern composers and modern times so well.  Complexity, but based on sound architecture and detail.  A few years ago, at Orford, near Aldeburgh,  I heard Exaudi sing some of Brian Ferneyhough's complexities, lines crossing each other, tracing and intertracing like medieval vaulting.

Please have a look at Iron Tongue of Midnight. Some journalist thinks that science proves the human brain cannot cope with the "Difficulty" of modern music. I won't give the original link, because it will send traffic to a fool, but read the link.  If science knows anything about the brain, it's that the brain's potential is so huge, we don't know the beginning of it. Quoting one source is like saying that the world must have been created in seven days, because the Bible says so. Creationism spreads because it's always easier not to make an effort, whatever the rewards. Music evolves, and adapts. But Creationists don't like Evolution, of course..

At Aldeburgh this year there's been a huge focus on science and art, specifically the neurological basis of creativity.  I don't have time to write that up just now, but keep reading, I'll get it done during July. The picture shows what can happen when people refuse to think. All along the Suffolk Coast, the cliffs are crumbling, just like in Peter Grimes. There once was a huge seaport at Dunwich, now hundreds of metres under the sea.  But this church, at Covehithe, wasn't destroyed by the sea but by men, in the Reformation and after. 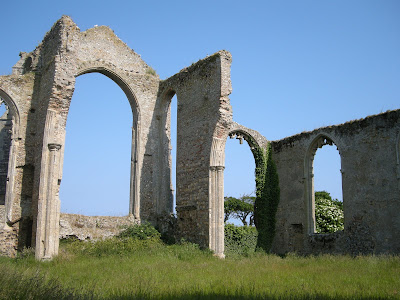 You speak of not wanting to 'send traffic to a fool' but I think you are merely put off by the unpalatability of the ideas in this article rather than anything else. Lerdahl's article poses real questions about the cognitive abilites of listeners and what listeners can deduce about the compositional intent and methods of the composer.
The fact that we can get something out of listening to complex modern pieces of music does not mean that the questions Lerdahl poses are not real and valuable questions.

It's not Lerdahl I'm worried about but the misuse of Lerdahl. There's a huge difference.