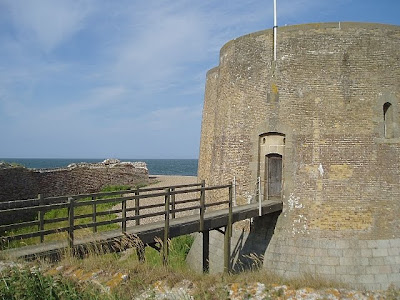 For my main review of George Benjamin's Into the Little Hill at the Linbury, Royal Opera House, London, please see HERE.

Major composers like George Benjamin, and major developments like Into The Little Hill don't pop up all the time. So it's important that Benjamin and his opera be showcased at Aldeburgh Festival. Hearing it at Aldeburgh is specially resonant for those who genuinely know and love the Festival (as opposed to tossers who mouth off).  Britten's vision was to create a place where creative new music could be heard, Thoroughly English as he was, he had little time for stereotype "Englishness" in music. Aldeburgh is not 3 Choirs On Sea.

Fundamentally, Britten and Aldeburgh have always stood for a much more cosmopolitan, progressive approach. Heinrich Schütz to Shostakovich, all part of a grand vision that crosses boundaries of time and genre. In Billy Budd, Officers Redburn and Flint "don't like them Frenchie ways". Britten doesn't like them, and writes grotesques around their roles. He should rise from his grave and smite the redneck bigotry we have today.

So Benjamin's Into the Little Hill is relevant.  It's loosely based on the fairy tale about a conformist community who rat on the piper who rids them of vermin. So he rats on them and takes their kids. Martin Crimp's text is bleak. The howling mob demand "Kill! Kill! and you have our vote",. When it suits the Minister to defend rats, he does, but when it means being re-elected, he'll sell his principles. But the story isn't nearly as straightforward as that.

A "man with no eyes, no nose, no ears" materializes in the Minister's little daughter's bedroom. He invades the sanctuary through dreams and through music. "With music I can reach right in /march slaves to the factory/ or patiently unravel the clouds"  Sinister as he is, he's morally neutral - "The choice is yours" he says to the Minister.

Into the Little Hill operates like a half-remembered dream, flotsam flowing out of the subconscious, the reverse of rats and children disappearing into the bowels of the earth. Precisely because it's imprecise, it works on many levels. It's unsettling because we're used to order and explicit meaning. Benjamin doesn't create "roles". Mezzo and soprano sing and speak snatches of phrases, part narrating, part expressing different facets of the story. The Minister morphs into his little girl, who morphs into the sinister Man with No Face..In a dream, things fade if you look too closely, so in Into the Little Hill, the secret is to let it act on your unconscious.

The whole opera pivots on ideas of dissimulation, concealment, crawling into dark recesses, nothing is safe from being gnawed away. So the music here is cloaked in disguise. You hear something eerie, or harps or bells. Sure enough, there's a cimbalom right in the heart of the orchestra. You hear something tense, tinny and shrill: it's a banjo, and conventional strings being played like banjos, strings plucked high up the shaft, not bowed. Much emphasis on low-toned instruments like bass flute and bass clarinet, whose sensuous, seductive themes weave through the piece like a narcotic night-blooming flower. At one point it sure feels like there's a sound so high pitched that the human ear can't quite hear it: but rats can hear at higher frequencies than we can.

The staging, by The Opera Group, (director : John Fulljames), fits the music and the semi-narrative. The Man with no Face operates through music : the London Sinfonietta play on stage, behind a gauze curtain, vaguely visible behind the action.  The stage is dominated by a huge circular frame. "I can make rats drop from the rim of the world" says the man with no eyes. "But the world, says the minister, is round". "The world - says the manm- is the shape my music makes it; the choice is yours"

The floor is scattered with black, soft objects. At Aldeburgh, you can get close enough to touch and smell the acrid stench of rubber. The orchestra and singers must be aware of the smell all the time, unpleasant and sinister. It's an amazing extra dimension, completely lost on those in the posh seats. The man with no face has senses like sight and hearing though he doesn't seem to have the means. The audience doesn't twig but the performers have it all round them. Like music, smell can't be seen but it operates on people. That's also why the opera starts with the image of orderliness trying to sweep the debris, trying to impose neatness onto something that defies order.

Brilliant decision to pair Into the Little Hill with Luciano Berio's Recital 1. This, too, starts with a cleaner, sweeping the same black stuff. At first it seems like it's a mistake, then you're seduced by the actor's elaborate tattoos. How does a woman whose body is a work of art become a cleaner? And that, in a single frame, is what Berio is after, the concept that things aren't necessarily quite what they seem.

Recital 1 is a showcase monologue for mezzo, which Berio wrote for Cathy Berberian, as a tribute to her range, and to her past. Susan Bickley is magnificent, as the diva spouting stream of consciousness, singing half formed snatches of different music, randomly shifting back into declamation. Sometimes she speaks directly to the audience. I had to force myself not to answer her calls, even though that would have extended what was happening ion stage into the audience, which is not a bad idea, given how Berio is playing with different levels of reality. We could have improvised, Susan and me!

Recital 1 is an inventive game of puzzles, so Berio packs as much into it as he can. It tends to make the idea go on a little longer than it needs, but that's OK. They don't write music this intricate too often. It goes with Into The Little Hill extremely well: maybe they'll be the Cav and Pag of the 21st century.  Last year, Birtwistle's At the Greenwood Side was just too oppressive to be heard with anything else. So hearing Into the Little Hill with Berio is an altogether different experience, far more sympathetic.

Superlative performances, especially from Susan Bickley, who carried off the rour de force that is Recital 1 and followed with the demanding, atmospheric main draw. Bickley is wonderful, at her prime. Claire Booth was excellent too. Some women in a delicate way can't cope with the smell of rubber, so all the more to her credit!  To be honest, Bickley and Booth have Benjamin, and indeed most contemporary British music sewn up, if it can be. Oh, for a DVD of Bickley and Booth and the Sinfonietta, of this production!

In Into The Little Hill, the interplay between the two voices is extremely important.  On the recording, Hilary Summers and Anu Komsi are too different, making the piece deceptively straightforward and confusing, Bickley and Booth, on the other hand, have voices that complement each other so closely that it adds an extra, disturbing element to the piece because their balance is so subtle.

The photo above shows the Martello Tower at the end of the harbour at Aldeburgh. It was built to repel Napoleon and dangerous ideas from the Continent, like democracy and the metric system. As it happened, Napoleon was more interested in Russia. The tower is on a little hill, as solidly built as a hill itself. Lots of interesting ideas might grow from thinking about it, and Benjamin's masterwork together, but that is, as the Man with no eyes might say, "Your choice"

Please see my other posts on Benjamin, Aldeburgh, Britten and The London Sinfonietta.
at June 21, 2010