Lang Lang - not a Michael Jackson 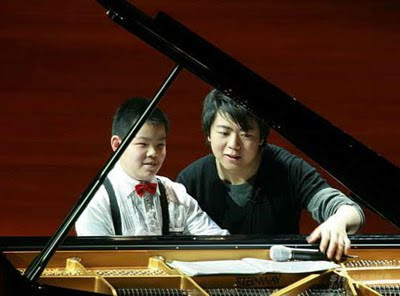 Lang Lang "the Tiger Woods" of music? Here is a link to an interesting article by Paul Kendall. in the Telegraph.

A lot of the negativity surrounding Lang Lang comes because he's successful and he's foreign. Those who'll go bananas on Dudamel will piously sniff at Lang Lang, Yet flamboyance is part of performance. Imagine if we saw Paganinni or Chopin or Paderewski or other Demon Musicians of the past?

So what if he makes big money? The key to understanding him is to understand where he comes from. His parents pushed him, but they weren't so very different from many people in their situation.  His culture is one that's always strived for excellence, but it's not about yourself. You're only one individual in a stream that includes your ancestors and descendants. Let yourself down, you're letting them all down. The individual, too, exists as part of society. Let the community down? Not morally comprehensible.

So Lang Lang has to be what he is because that's what people expect of him.  He cannot let them down. Material success means a lot to people who have been seriously poor.  It's not a hypocritical culture that pretends money doesn't make a difference.Lang Lang's success is a symbol that anyone has the potential to make it, not success for its own sake..

So he's got to be a showman because that's what people expect from him, and he's honourable enough to respect that he has responsibilities other pianists will never need to face.  He can't be judged in the same terms. The wonder is that he's a lot less screwed up than he could have been.  He could have become Michael Jackson, for example. But he isn't. He stood up to his Dad, after all, which not that many kids dare do (especially not Chinese kids). So there's strength of character in him.

Sometimes when I listen to Lang Lang, I feel that there's a greater artist inside, trapped by the need to serve the public. In itself that makes me respect him. And that schedule, those commercial pressures and the social pressure that comes from being a national symbol. No other musician has ever faced such things on such a scale. He's a sharp businessman but he also enjoys playing. He's driven, but it doesn't come over as pathological. Workaholics get a buzz like an adrenalin high. Some of them actually thrive, as long as they have inner stability. It's a paradox, but that's life.

Because he's enthusiastic about playing, that comes over too.  One of his trademarks is that he works with kids, as if by being good to them he's exorcising his own trauma.  This too slots into the idea of a "worthy man" serving the people, which goes right back to traditional ideas of giving back if you've had good fortune.. Sure, his sponsors get publicity, but so what ? The kids and their audiences sure seem like they're having fun, which is what music making "really" is, not just virtuoso display. By having fun, he counteracts the pressure that millions of kids are forced to feel.  In the long run, Lang Lang's influence is positive.

"Fame itself, he says, should never be the objective. 'Of course I hope everybody can achieve their dreams, but my point is, don’t drive yourself crazy to become something that maybe you don’t want to be. For me, still today, it’s the enjoyment. The reason why I perform every second or third day is because I love it. It’s not because, this night I get paid so much. On stage I find myself."  "So, is he happy? After leading such a pressurised life for so long, many suspect he’s on the verge of burn out. 'I’m extremely happy,’ he says, smiling and placing his precious hands behind his head. 'Whether I’m teaching or whatever. Being on stage is the best thing. It’s like “wow”, it’s a totally different world.’".
at June 17, 2010

I can hardly think of any great virtuosos that didn't have a long story of struggle leading up to and continuing through their careers. Some of them, Horowitz and Richter come to mind, found a way to the music that was at once profoundly personal but also somehow very true to the composer's intent. To many listeners, Lang Lang does not seem even remotely in that league. And to many of us, his stage mannerisms are all just distracting nonsense, made all the more annoying when followed by pedestrian music making. I am sure you are on target on many of the things you admire about him, though they are largely tangential to making music. Reading reviews on Amazon, one can observe that even his admirers find his performances often disappointing when experienced on a CD without his stage prescence. So call him a great entertainer, perhaps in some respects a great person, but not quite a great pianist.

BUt why6 does amyone have to be like Horwitz or Richter or anyone else ? There are lots of good pianists that aren't like Hough, Lewis etc. Lang Lang is more than "just" a pianist, he's an institution. That makes his position completely different bto what he might be if he was "only" a pianist. The fans can see the difference, and understand. But being a symbol draws fire, as well as praise. The symbol, positive and negative, is not the music.