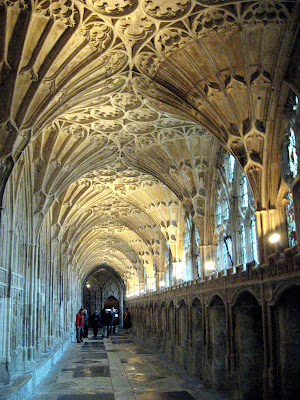 Gloucester 2010, the hip new tag for the 3 Choirs Festival, which started in 1719. The longest-running music festival in the world!  It began as a meeting of the choirs of the cathedrals of Gloucester, Hereford and Worcester.and has shaped the course of English music. The massed choir tradition, the genteel propriety, the jolly unassuming mentality, all these threads flow from the 3 Choirs ethos.

The photo shows the fan vaulting in Gloucester Cathedral. There's plenty to look at too. Indeed churches are best seen at night, when shadows and light accentuate the stonework.

Every year, 3 Choirs opens with a church service, because piety is fundamental to the 3 Choirs purpose, though it's genuine piety, they don't force it on anyone else. This is the Holy Grail of religious singing. Try and catch the Complines, Evensongs, and Eucharists, because these are authentic, sung by people who believe. For people like me it's a kind of secular worship, but for many 3 Choirs people, it's central to their lives.

Elgar, of course, was a Catholic, at a time when Catholicism certainly wasn't Establishment, but 3 Choirs was part of his life, as he himself is central to the 3 Choirs Festival. This year The Kingdom on 7th August. This piece suffers sloppy performance, so avoid most "local" versions and go for the ultimate best, which is 3 Choirs. This will be spectacular, as they pull out all the stops for Elgar. Soloists are Roderick Williams, Adrian Thompson, Susan Gritton, Pamela Helen Stephen.  I'm sitting behind stage and choirs to be "within" the atmosphere.

Sunday of course is one of the big social days, with religious services as music, and hearty roast lunch. Oddly enough the big evening concert is Mahler 2, obviously chosen for the massed voices parts.  Of course M2 is spiritual, but fundamentally Mahler's mindset is too quirky to really fit group worship. Besides Evensong will be Finzi, Lo, the Full Final Sacrifice, which should be wonderful.

Gloucester 2010 will be important too because they're featuring early music in-depth. The Pipe and Tabor Society is hosting several events, Venetian and Renaissance and early English music, including a talk on one of the earliest notated carols, with origins in Gloucester itself.

Because I left it too late, I can't get to Ian Venables' talk on the orchestral music of Ivor Gurney - front line, first person research, as Venables, a good composer in his own right, is a Gurney devotee. Frustrating as anything, because it follows the Gurney Society Lunch, where all the serious fans will be. After that, a concert where Gurney's A Gloucestershire Rhapsody, Mendelssohn "Scottish" and Schumann Piano Concerto . Martyn Brabbins conducts the Philharmonia Orchestra. In London this would be a big draw,  yet here it's just one of many gems. In the evening, Monteverdi L'Orfeo.

Pity they didn't switch Monteverdi with the concert on Fri 13th which includes Gurney's rarely heard The Trumpet, and Finzi's Intimations of Immortality, with James Gilchrist, who sings it better than anyone else.  But maybe that's because the concert includes Elgar's Sea Pictures and it's Elgar Day, with talks, and the Elgar Society Lunch (important social event).

Many people who go to 3 Choirs stay the whole time, so mix and match is a good idea, but for others, it's a long drive, so concentrating connected works is better for them. For example, I'd love to go to the Roderick Williams concert on Saturday morning, but it will mean staying overnight, which is pricey. He's singing Finzi, Butterworth, Gurney, Venables and Moeran. He's just recorded a Butterworth CD with the Sussex songs. I'm looking forward to that, even though I loved Mark Stone's pioneer recording.

3 Choirs is a must if you've any interest in English music, medieval to modern. Hearing lesser known composers like Joubert (who isn't "that" lesser known, Gilchrist has recorded his songs) at 3 Choirs puts their work into context. Those who go to 3 Choirs for the whole week and soak up the social side and history know what they're doing.

This year, 3 Choirs introduces massive technological revolution - online booking for the first time! Yow! The bad news is that it's bug ridden, and no doubt they'll streamline it for next year. But it's a step in the right direction. Still, the fact that the system's so clumsy is actually quite charming, and says a lot about the innocence of 3 Choirs, which is a good thing. You can get a whiff of the old system when you hear the recorded message on the phone. Miss Marple, tweed suits, sensible virgins cycling to church through country lanes etc. .That England still does exist, so savour it while you can. PLEASE READ my more detailed reviews and articles on Gurney, Parry, Finzi, Elgar Butterworth and 3 Choirs. Use search or labels at right
at June 15, 2010