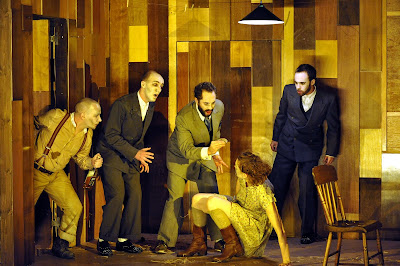 Martyn Brabbins in makeup? I almost didn't recognize him made up as a corpse. Brabbins was conducting the BCMG in David Sawers's Rumpelstiltskin starting the Spitalfields Music Festival, London.

St Leonard's Church, Shoreditch, has been semi-derelict for years. It's surrounded by bars, drunken hordes, a pervasive smell of vomit, police sirens every five minutes. Perfect venue then for Rumpelstiltskin, a fairy tale so grim even Disney stays clear.

Bankrupt miller fools bailiffs, saying daughter (Bryony Perkins), can spin straw into gold. Ugly dwarf pops up, saves girl by spinning straw to gold. Girl marries King, gets rich. When dwarf returns for his payoff, girl cheats, steals secret from dwarf and reveals his name. So dwarf explodes into many pieces. What kind of moral does this tell?

Musically this was gold. Musicians on stage as part of the story, interacting with players. This was good, music itself as "theatre", the players moving from time to time to solo among the action. One ensemble with Brabbins, muffled tuba, trumpet, horn, clarinets, oboe, flute, bassoon, bass - dark, ominous. Smaller ensemble led by harp, with violin, viola, cello. But the groups merge and change, so following the musical lines is part of the action itself, like a puzzle "spun" from different threads on different levels. Interpretively, it expresses the strange changing alliances in the story, for the miller's daughter's forced to keep switching loyalties.

As theatre, perhaps it was more straw, but straw is useful and serves an important economic purpose, if you're a farmer. It's a subtle comment, then, on the values of the folk in this story, who want what isn't theirs and don't appreciate what they have. No wonder the 40's Austerity Britain costumes and props, "Make do and mend".

Stewart Laing's staging is simple but effective. It's a boxlike structure that serves as mill, palace and Rumpelstiltskin's hut. Again, apposite because they're all the same, and all prisons of a kind. The box is built of reclaimed hardwood panels. Cheap but very beautiful : these panels were once something good, not the trashy MDF we get today.

No singing, no dancing, no acting. Richard Jones directs stylized, mime like movement. This will throw those who think all opera, ballet etc must conform to late 19th century models. It confounded me but not for those reasons. For me, the music was so inventive that it told the story better than the rather thin narrative. Rumpelstiltskin works best as music, and in the imagination. .

Amazingly vivid images. Grinding, repetitive sounds - mill wheel, spinning wheel. Brass and woodwind create peals of bells for the Royal Wedding, tense, scratching plucked strings creating the Miller's daughter's terror, trapped in a box trying to save her dad but knowing he's nuts. Rumpelstiltskin's music's suitably twisted, though not quite as harsh as it might be. But maybe that's because I sympathize with him (in this case her, played by Sarah Fahie). Rumpelstiltskin came to help, after all, he's the only honest one in this grasping lot. And he gets killed.

The acting is more exaggerated mime than dance. It could be perfect for enthusiastic sixth formers (though they couldn't do the music the way BCMG plays). But maybe that's the point, as my companion said. Maybe it's supposed to be silent movie melodrama, for these characters are cardboard, without depth, while Rumpelstiltskin has a background, though we don't know what it is. He's an outsider, living in the wild wood. Maybe he's lonely. The kid's worth more than gold to him. A parody of Mime and Siegfried?

Anyway, the tale's picaresque. As my perceptive pal said, it's like L'histoire du soldat, overlaid with Rusalka.  It will be very good on CD. Even if all that remains of the acting is the sound of pounding footsteps, that will work as part of the music.The percussion in this piece is made by human feet. Humble, like straw, but worthy.

Pity Rumpelstiltskin had to compete with George Benjamin's Into the Little Hill openiong at Aldeburgh on the same night. Both pieces are fairy tales with huge mythic possibilities. Benjamin's altogether in a higher stratosphere, There's enough gold in this music to make Rumpelstiltskin a keeper, And as for the straw, as I said, that too serves a valid purpose.

Email ThisBlogThis!Share to TwitterShare to FacebookShare to Pinterest
Labels: BCMG