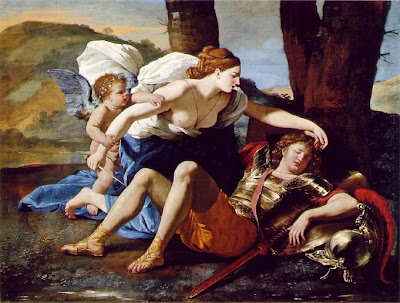 Two major stagings of Rossini Armida this year, at Garsington and the Met, New York. Complete contrast, but one which shows that it's not how much money you throw at a production but what artistic values go into it. Garsington wins, hands down.

Obviously Renée Fleming is way above the league of most anyone else so the Met prod was worth hearing, though not seeing. Particularly as La Renée may not be singing it for many more years. I'll be writing about Garsington later today. But here is Maria Callas  in the role.

It's a live performance from Firenze in 1952. Callas is barely 30 but she connects to the fire within Armida, who is a sorceress, neither bimbette nor fag hag, both of which are elements in the image but not central to it.  So Rossini set in the Crusades? Realism, no. Dotty as the Crusaders may have been, they didn't get transported to supernatural worlds. What commander would be so dumb as to go and fight an enemy that doesn't exist? Oops, lots of them....

Naples audiences in 1817  would not have been fooled that Armida was "about" Crusades. They knew plenty, plenty about priests who broke their vows, seduced by temptresses. And Rossini knew he might end up in jail if he was too explicit.

Listen to Callas and drool. Look at the tenors, too - Francesco Albanese, Mario Filippeschi, Alessandro Ziliani, Gianni Raimondi, Carlo Stefanoni, Orchestra e Coro del Maggio Musicale Fiorentino, Tullio Serafin (conductor)  Cick HERE for full streaming download on Opera Today . Extremely comprehensive notes, full libretto, synopsis. This is a seriously good resource!  The sound quality isn't good, but this was the first modern performance, so it's of historic value. Review of Garsington Rossini Armida coming up soon. and listen to your heart's content. .Photo by Poussin, who painted Armida and Rinaldo in most UN-medieval dress, nearly 200 years before Rossini wrote the opera. And Roman soldiers wore skirts, not shorts, so Poussin is updating that, too. Besides, what you'd see in this pose should not be revealed.
at June 09, 2010