Britten never was an insular Little Englander. Contrary to some of the nonsense in the press this week, the Aldeburgh Festival was never regressive, Central to Britten's vision was the idea of promoting new music and new talent. Anyone who really knows and loves Aldeburgh - and Britten - knows what the Britten-Pears programme means and why.

Britten and Pears would have been delighted, I think, by this concert of works by young composers who've been through the Britten-Pears Programme. Six young composers, and a young conductor, Hugh Brunt, who stepped in at the last moment but clearly is in tune with this music and mentality.All six composers are in their mid-20's but already quite distinctive, certainly not clones of Britten or anyone else.

Lauri Supponen (b 1988), from Finland, uses the essential elements of conventional symphonic orchestra, but pares them down to single instruments - one violin, one viola etc. Hence the title, Fras which means phrase. As he says, it's about the particles that make up speech.

Much Krazy Kinetics in Francesco Coll García's Piedras. "The rhythm", he says "stable and unpredictably unstable at the same time, envelops the melting middle section." The madcap sprightliness made me think of the surreal cartoons of the 1920's when cartoons were avant garde art. 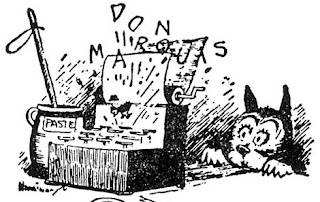 This spirtit of fun infused Joanna Lee's archy interviews a pharaoah. I hadn't read the programme notes, so this came as a shock to me. Does anyone else remember archy and mehitabel the Don Marquis cartoon  and poem series of the 1920-40's? Always lower case for them because the cartoon series was supposedly written by a cockroach who jumped key by key on a typewriter in a newspaper room. He has the soul of a poet, she, an alley cat, is a Queen.  Imagine a cockroach interviewing a pharaoh, utterly deadpan and matter of fact. Lee's music captures that sense of scratching, tapping edginess. The vocal lines creep and leap, like archy's droll lines do.

The singer was Sonya Knussen, the Muse of Higgeldy Piggeldy Pop and Where The Wild Things Are. She looks like her dad but much prettier and has both her parents' flair and personality. Richly coloured voice shading towards alto. With good training, she'll get the polish and refinement she deserves. Oddly enough my Dad was a serious archy and mehitabel fan, so I wondered where Lee and Knussen fille got their archy from.

Christopher Gendall's Forest for the Trees was interesting, as was Nancie Eloise Gynn's Shadow of the Wind, both descriptive mood pieces. Edward Nesbit's Dance Portraits appealed greatly. It starts with a slow pas de deux between double bass and bass flute proceeding in the space of a few minutes into four sections. Dance as strategic game, figure shadowing one another Good ideas, here.

These six pieces were preceded by Webern, Stravinsky, Castiglioni and Stockhausen, performed by the Britten Pears Composers Ensemble. All Oliver Knussen favorites, and for good reason.  Proof again that those who claim to "know and love" Aldeburgh and think it's a regressive, anti-foreign Britten-only festival are nuts. Clean lines, stylized processions, humour and wit: good things for young composers to master. Perhaps the influences are still a little too strong (several composers use piano strings plucked inside the frame). But that's the spirit of Aldeburgh, too, learning the past while proceeding forwards. LOTS more on Aldeburgh and new music on this site, please explore. Look up tabs on Benjamin George too and Into the Little Hill, which I saw last year and heard again this week and will go to yet again in July at the Linbury.   It is a very important work and desreves another special piece which takes a bit longer and I'm so rushed at the moment. So please keep looking.
at June 19, 2010