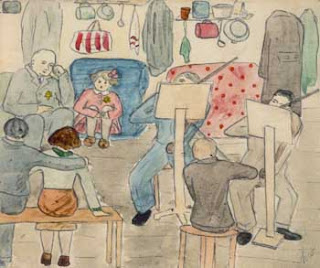 Is this an ordinary family making music? Look closely. Dad and the little girl are wearing  yellow stars. This is a drawing from Terezin Theresienstadt, by Helga Weissova-Hoskova, who was a teenager then. She survived and was at the Wigmore Hall for the Nash Ensemble's tribute last weekend.

Lots of people had come in from Israel and the Czech Republic. But the music of Theresienstadt speaks for everyone, because it shows how people can be creative in the most adverse situations, and that art has value, against all odds. That's why its significance resonates for all humanity.

Because camp conditions were strained, no huge Wagnerian orchestral extravagance. Instead, focus on chamber musi, song, things that ordinary people can do. Ilse Weber's poems and songs are loved because they are so simple and down to earth. They weren't meant to be fancy High Art but they  are moving because of their context. Terezin-Lied came from Emmerich Kálmán's hit operetta Countess Maritza,. Everyone knew the tune, so changing the words gave it another level of meaning. Trained voices not needed, everyone could sing along together.

The Nash played Gideon Klein's String Trio, written in camp in 1944. Perhaps this is the piece being played in Helga Weissova-Hoskova's drawing? It doesn't matter, but the thought gives the music extra poignancy. Klein's music is so elegant that it's good to hear whatever the context, but on this occasion, the connotations did take on extra meaning, and rightly so. Holzmair sang Klein's song in the encore. including the wonderful Lullaby.

Hans Krása's Brundibar is famous all over the world these days, performed in many languages. At the Wigmore Hall, in the presence of people who took part in the original performances, it was unique. The Nash  played two Hans Krása works for string trio, the Passacaglia and Fuga, and Tanec, so Brundibar can be appreciated in the wider context of the composer's work.


The Nash Ensemble came out in full force for the second evening concert, which placed Terezin music in the wider context of Czech music. Here, too, adaptation and renewal. Smetana's Overture to the Bartered Bride, but in a new arrangemnt by David Matthews (who was at Aldeburgh the previous day).  You can see a a film of the opera on this site HERE, in full, It's quite unusual, because it was made in the UFA studios in Germany during the Third Reich but features Czech singers and looks like it may have been filmed in Bohemia. It's in German, which is no big deal, as opera was frequently sung in different langauges in the past, but it does make you wonder about what was going on in UFA despite the official Nazi control..

Then Petr Pokorny's arrangement of Krása's Brundibar for 13 instruments. Although the opera is worth hearing because it's such a good piece for children's voices, hearing the Suite highlights the composer's orchestration. As music it works well, especially when performed by top notch musicians, which isn't always the case with the opera.

For me the high point of the evening was Erwin Schulhoff's Duo for violin and Cello. Schulhoff wasn't in Terezin. He was a Communist and non-religious, which made him an outsider both in Nazi Germany and in Czechslovakia.  The Duo dates from 1925. It's quite remarkable. Its starts with brio, hurtling incisively into the first theme: no messing about. The violin (Marianne Thorsen) flows a long melody at the upper ends of the range: exquiste. The cello (Paul Watkins) listens, pauses, then repeats the melody in  a lower timbre. The second movement is a Zingaresca, gypsy dancing, but muted, a nostalgic memeory rather than a dancer in the here and now. The Andantino's edgy, decidedly modern. Strings plucked, jerkil : folk music this is not, despite the references. The final movement, marked Moderato, sounds almost pentatonic, alien to the Austro-German tradition. Part way it breaks off in false ending, then resumes, brighter and firmer.

Ian Brown played Viktor Ullmann's Piano Sonata no 6, writtten in Terezin, and Holzmair returned to sing Krása's Three Songs and Pavel Haas's Four Songs on Chinese Poetry.  Enjoy these and more on his CD, reviewed HERE.on this site, where there's plenty more Theresienstadt and suppressed music. The second evening concert is being broadcast on  BBC Radio 3 on Monday 5 July and will be available on line on demand for a week.
at June 22, 2010

Ironically, I fell today on a short documentary on www.ina.fr about the film the Nazis produced in 1944 in Terezin for their propaganda.
The "vintage" music illustrating it tells about the violence and vulgarity of the Nazis: the "Jews" are shown "working" in good condition and we hear principally "Jewish" music and a mock Beethoven to "harmonize" the lie. Was it implying a subtle comment like: "we know very well how they are". Crual irony.
It ends with a testimony of Karel Ancerl in 1965, conductor whom we see also briefly "leading" the Terezin orchestra : http://www.ina.fr/art-et-culture/cinema/video/CAF93012684/document-camera-nazie.fr.html