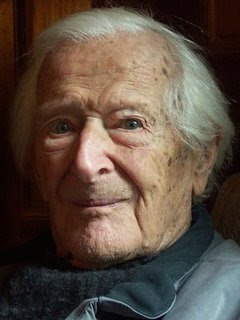 Aged 10, Hugues Cuénod attended a concert celebrating Camille Saint-Säens's 78th birthday. Saint-Saëns played  piano with Ignace Paderewski,while Felia Litvine sang. That was 1913. This weekend, Hugues Cuénod reaches his 108th birthday. He still lives in Vevey, in Switzerland, where he was born. He's frail now, sleeps a lot, but still has his wits about him.

Cuénod's famous in the Anglophone world because he made his debut at the Met in his 80's. But the Met isn't the world. Cuénod trained in Vienna and Paris in the 1920's, singing whatever amused him - operetta,  Mozart, Krenek's Jonny spielt auf in 1928, and "Negro spirituals" which he learned from a black American tenor, and recorded in the 1930's.

He didn't hear Pelléas et Mélisande til 1922, but knew many of the people involved with it, including both Mary Garden, Debussy's choice for Mélisande, and Georgette Leblanc, Maurice Maeterlinck's mistress, for whom he'd written the libretto. LeBlanc told him a story about how she and Maeterlinck were canoodling in a park when her husband appeared. Maeterlinck shot up a tree to hide. The scene went into the opera!

Cuénod sang Bach with Vincent D'Indy (in French) and knew the severe, "Protestant" Bach tradition in Geneva. He met Nadia Boulanger in 1934, just when she needed a singer to illustrate her teaching of Monteverdi, thus making him the first "modern" Monteverdi specialist. Boulanger was no purist, playing piano rather than harpsichord or fortepiano, and with heavy-handed gusto, but they made Monteverdi exciting and fun.  He also sang Cavalli and other early operas.. Without Hugues Cuénod, the baroque revival of the 20th century might not have happened so quickly..

Yet, as Cuénod cheerfully says, he's never taken life too seriously. Boulanger was notoriously demanding. Igor Markevitch, also a Vevey boy, and friend of both, called her "Herr Doktor" behind her back. Cuénod could defuse situations with his easy, laconic humour.  He, after all was the man who could croon like Jean Sablon so well that he formed a duo with a soprano, called Bob et Babette, to sing French language pop songs. There's a great photo of them in 1937, looking so wholesome and sweet it's almost a joke!

Cuénod also knew  Noel Coward, whom he described to an  interviewer as "an English Sacha Guitry". They did a thing called The Green Carnations which was so openly gay, even Coward was worried how it might go down. Maybe the public didn't twig. When Switzerland allowed gay marriage, Cuénod was one of the first to take advantage, marrying in his late 80's. They're still together, after 40 years.

Of course, Cuénod knew Stravinsky, their circles connected in many ways. Stravinsky wrote Sellem the auctioneer in The Rake's Progress for him, a short but characterful role, making the most of Cuénod's dramatic strengths. (one of his favourite roles was the Stammerer in Smetana's The Bartered Bride). Everyone in the business went to the premiere, and Cuénod's opera career blossomed better than any agent could have dreamed. That's how he was asked to sing The Captain in Wozzeck at La Scala with Tito Gobbi.

Cuénod also became an enduring fixture at Glyndebourne.. He was also a regular at Aldeburgh, for many years. Britten wanted him to sing duets with Peter Pears, but it didn't work out because their voices and styles were too different. "Harnessing a horse with a steer", said Cuénod, discreetly.
.
So Happy Birthday Hugues Cuénod, and many more to come!
Photo credit : Charles Sigel
at June 23, 2010

Marvellous to have so great an artist still with us. From Monteverdi, Bach, Mozart, Schubert, Schumann, Elizabethan, and everything up to Stravinsky, he is the model singer - no grandstanding and refined to the point of invisibility. Nothing comes in the way of the music. "The art that conceals art" as Ernest Newman put it in relation to a near-contemporary of Hugues Cuenod, John McCormack, a tenor 18 years older but not blessed with the same vocal or physical longevity, having died 65 years ago, and suffering diminished vocal powers from his mid-forties, compensating for it to a great extent by hs growing interpretative powers. it's notable that, in a 99th birthday interview with a Hawaiian radio station, Hugues Cuenod admitted that until recently he still taught interpretation, but had never learned a technique to pass on. McCormack, on the other hand, had flawless technique, but was not granted the vocal longevity to accompany and develop it.
Nevertheless, their artistry and dedication have many parallels.

Long may he live to enjoy his heritage of wonderful recordings, and the acclaim of his many admirers.

Truly !! And what is even more remarkable was that he never chased fame or money for their own sake. So much of what he did was not fashionable or popular at the time, he did anyway, because he cared. Nowadays singers are under more pressure to conform to what the public expects and wants.

Oh, and I forgot, I have a tape of the Hawaiian interview. The interviewer keeps wanting to talk about technique but Cuenod says it' something he doesn't worry about. In one French interview, he talks about enjoying food, wine, etc in other words, living fully and it goes into interpretation. Some vocal coaches would go bananas ! But the proof is in the singing.

We send him a Happy Birthday

WONDERFUL ! Good to hear from you Jean !

I am so delighted to hear that Hugues has reached his 108th. I first met him close to his 88th birthday when I began research on Dinu Lipatti, and we have been in touch ever since. I was present at his 90th birthday celebration, and last visited him in 2004, when he was 102 (and in wonderful shape). I haven't reached him by phone in a couple of years as I've been traveling on his birthday ... I think of my many visits with him with great fondness... All my best, Huguey!!

Many thanks, Mark ! Truly, Hugues has a clear soul. "LIfe is too important to be taken seriously" My motto too.