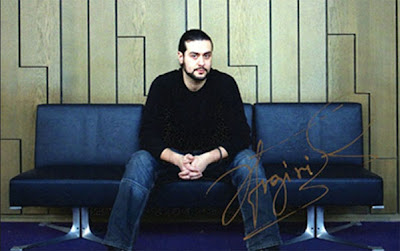 Aris Argiris makes his debut at Covent Garden as Escamillo in Bizet’s Carmen. But this is unusually high-profile. The Royal Opera House is having this Carmen filmed in 3D digital technology, which is higher grade than the current 2D high definition.

Such a debut would put pressure on any young singer, but Aris Argiris, the 35 year old baritone, is resilient ..."Escamillo is a Toreador, he’s not afraid”, says Argiris. “He gets charged by bulls all the time, so he stays calm, even when José pulls a knife on him. His job is to fight bulls, not to kill men. It’s not worth his time. He thanks Carmen for saving him, but actually he’s already getting up. Next minute, he forgets about the duel, and thinks ahead, inviting everyone to the next bullfight.”

“Escamillo is a big star, all around him people are singing “Vivat! vivat!”, so he has to give them the kind of show they want. Why do people like watching blood, danger death? I don’t know. But Escamillo gives them a thrill. Both he and Carmen are the centre of attention, they have to give their public a dramatic image, so they both have these wonderful arias. So Votre toast, je peux vous le rendre is Escamillo’s Habanera”.

“But Escamillo knows that in the bullring, he is alone with the bull. Real Toreadors are very young”, adds Argiris, “Seventeen, maybe 21, but they have to be young, like footballers, because they have to move fast. They can’t grow old or the bull kills them”. The aria is full of thrills, but also “un œil noir”. Someone, something is watching the Toreador. Is his fate love? As Carmen sings, love is a wild bird that cannot be trapped. And bulls have dark eyes too.

“Escamillo acts like he doesn’t care, but he is a deep person. Carmen too, acts like a devil, but there is something more in her. She is a bit like Don Giovanni, everyone wants to be with her, but everyone gets hurt. So she’s a challenge to someone like Escamillo who shows no fear. The moment they see each other, the whole atmosphere changes, even though she pretends to be haughty. The meeting is fatal, because it’s the beginning of the end for Carmen”.

“What they feel is ursprunglich, it comes from deepest parts of the soul. At this moment, nothing else matters, they can’t think rationally or about consequences, it’s pure instinct.”

“Their love duet must be the shortest love duet in the whole repertoire, only a page and a half. They sing in unison, but it only lasts a moment, like their love, which will end too soon. There’s nothing like it between Carmen and José”. In the middle of the interview, Argiris bursts into song, he’s so moved. “Listen how it ends with a modulation. It cannot go forward because their love will not go forward. It’s amazing how Bizet writes it, it’s deliberate. He’s telling us that this love cannot be fulfilled. The moment is short, but it’s so important, and it’s cut with strange harmonies from the orchestra.”

“And look”, Argiris adds, “how Escamillo shows his love for Carmen to the whole world, without fear. She was a gypsy and was a smuggler, but now she is the Toreador’s Lady, and she has the best seat on the horse. She is someone important. Yet at that moment of triumph, she is killed. So it’s not an accident that, when Carmen dies, the Toreador melody is heard again. In the distance Escamillo has killed another bull. The crowd cheer, but he has lost, because he has lost Carmen”.


A longer and more detailed version of this will appear shortly in Opera Today. First Night is tomorrow. Read more about Argiris here. He's a nice guy. .PLEASE READ THE REVIEW HERE and on Opera Today soon
at June 04, 2010