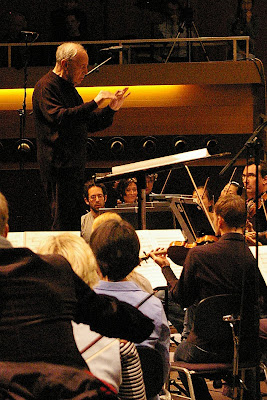 Pierre Boulez brought Ensemble Intercontemporain to Aldeburgh. This is a major coup, which London venues can't easily arrange. But Aldeburgh can bring Boulez and his amazing orchestra to a hall seating barely 500, in a small country town, because Pierre-Laurent Aimard is Festival Director. They go back together since Aimard was a boy.

This grand finale to the Aldeburgh Festival was much more than a concert, it was a consecration. Ligeti, Boulez, Carter on the programme, but many others invisibly present because of their close connections: Messiaen, Stockhausen, Kurtág and so on. Boulez may not have conducted at Aldeburgh before - he's too expensive - but his "family" of composers have been an integral part of the Festival for years.

Edgard Varèse was the "First Wild Man of Modern Music". Boulez was one of his earliest champions. Varèse didn't have electronics or computer facilties: Boulez created IRCAM so composers of the future would have access to the best technology and support from other creative minds.  It was fitting that the concert should start with Varèse's Octandres. It's not his most famoue piece, but perhaps the most "classically" pure. Seven winds, one double bass -- no klaxons, so no extramusical baggage, but thoughtful exploration.

It was a good prelude to György Ligeti's Chamber Concerto (1969-70) expanding the concept of single instrument protagonists develops into music of delightful but deft complexity. Technically, Ensemble Intercontemporain are of course flawless, but this was truly inspired.  Superb musicianship is liberating, These players don't need to "think",  they play with instinctive freedom. Boulez's conducting style is understated, the merest jerk of a finger, the most refined twist of the wrist, but Ensemble Intercontemporain are so much in tune with him, they catch every nuance.

Some of the most amazing playing in the quieter passages, where the line floats seamlessly even though it's taken up by different instrument.. Perhaps another example of what Ligeti meant when he said his music levitated, like a helicopter. Catch this performance when it's broadcast on BBC Radio 3 online, on demand, internationally for 7 days from 30 June. Studio recordings may be more perfect, but this live performance had élan, vivacity, sparkle. "Breathtaking" is an over-used cliché, but in this case it was apt: you didn't want to breathe lest you miss a moment.  A very well kmown composer/conductor was sitting near me. He sat transfixed.

What are Years is the title of  Elliott Carter's new song cycle, an Aldeburgh commission, in association with the Lucerne Festival and Tanglewood. Aldeburgh is now up there with the biggest. Britten would be thrilled, though some of the British press would rather it became a provincial backwater.  The cycle is to poems by Marianne Moore. Five songs, a group of four which cohere, the final song leading into an unknown, new direction.

Moore's disjointed combinations of phrases without structure suit Carter's vocal writing. Although he was a singer himself (glee clubs and chorals in college)  he doesn't set text in a "singerly" way. Instead, he makes much of Moore's jerky rhythms, sudden bursts of expression, deliberate holdings back and silences. What are Years is certainly not poetry reading but music revealing itself through the framework of text. The voice acts like an instrument, probing and eliding, stretching and pulling the words as if they were abstract music. Claire Booth has the measure of the piece, interacting well with the orchestra, whose role here is critical, enveloping the fragmented nature of the text with a flowing, serene line that suggests the passage of time.

Natural then that Boulez and Ensemble Intercontemporain ended with Boulez's Dérive 2, written for Carter's 80th birthday, nearly a quarter of a century ago. Now Boulez himself is older than Carter was then. But age is irrelevant when a mind is fertile.  Perhaps that's why Dérive mutates, growing in the imagination. Boulez's music is strongly organic, in the sense that it evolves from deep roots, and grows vigorously. following a definite trajectory, excursions spiralling outwards and growing branches of their own. Again, Ensemble Intercontemporain played vivaciously, energetic but elegant. For me, one of the joys of Boulez's music is the sense of inventiveness and renewal. It may look "difficult" on the printed page, but musicians like Ensemble Intercontemporain reveals its innate liveliness.

Anthèmes II is another Boulez growth-piece, where the violin is augmented by electronics. Jeanne-Marie Conquer and the IRCAM sound desk make sounds that twine round each other symbiotically: which is which, who's leading whom? It's a sophisticated piece, yet approached with wit.

Hearing Dialogue de l'ombre double in the intimate performance space of the Britten Studio at Snape was wonderful. because seeing the movements intensifies the impact of the shifts in sound. It's like a dance bwetween clarinet (Jérôme Comte) and electronics, so seeing Comte change position marks stages in the ritual. The tiniest change of position means a change in sound dynamics. It's a concerto that uses the acoustic of performance space, and sound inaudible to the human ear . Hence the electronics, which pick up things that exist, but we couldn't otherwise hear. It's a multi-layered work, where the boundaries  between clarinet and electronics are deliberately blurred, teasingly up-ended. You have to listen acutely to pick up the subtle shifts and counterbalances, but it's immensely rewarding, especially enhanced by darkness and light as in this performance. Comte emerges from the shadows. Is he playing or is it the sound desk? Again, it's playful and organic, formidable but not at all frightening. If only Varèse, John The Baptist of modern music, could have been with us, too!
at June 29, 2010

This was a fantastic evening, and I agree that the Ligeti was particularly inspired and inspiring. The Ensemble's degree of natural comfort with what are often unusual instrumental techniques, especially in the strings, provided the music with an effortless fluidity which brings out the beauty as well as the drama in Ligeti (and in the Carter too for that matter).

And thanks for giving me your card - your blog is fascinating and entertaining and I look forward to digging into it more deeply!

Welcome Martin, great to see you ! Hopefully we'll meet again next year - you could bring your kid !