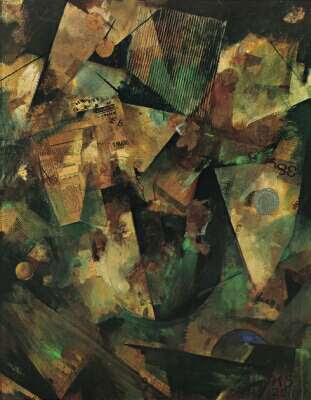 Collage creates something new from found objects getting the mix right in a creative way. Pierre-Laurent Aimard's Collage-Montages are artistic creations in their own right.  This year he's put together Collage-Montage 2010 for solo piano, which is now available on BBC Radio 3 for seven days online, on demand.  Do listen, it's great fun.

First time round I listened unprepared. Your ear catches recognizable fragments and then suddenly they switch into other things. Whimsy! Yet this is a purposeful collage, with intelligence behind it. Next time round, listen analytically to the logic and the way the forms act on each together.

On third listening, it's sheer delight, absorbing the myriad colours and shapes, and the lively sense of movement. A kaleidoscope for the ears!

Collage-Montage 2010 evolves in five movements  like a miniature symphony. Prélude élémentaire,  Sostenuto and Capriccio speak for themselves, but into this Aimard throws real caprice, "3x3" and Cloches d'Adieu for a finale.

The first section starts with fragments from Ligeti's Musica Ricercata no 1, composed around a single A which leads to a D,  via Bartok, Schoenberg and Webern to Boulez's Notations (no 8)  where the two notes repeat. In Sostenato, the goal is to sustain seamless flow from a minimalist moment in Kurtág’s Játékok to a fulsome conclusion, via Janàček, Skyrabin and Beethoven (Diabelli v20)

No fewer than eight pieces in Capriccio, rounding Beethoven themes with Scarlatti, Joihn  Cage and Schumann. The combination's so witty, I burst out laughing, it's so light hearted.  Cloches d'Adieu plays with the idea of bells as coda: Delightful switchbacks, Tristan Murail, Ravel (Gaspard de la Nuit)  and of course The Great Gate of Kiev (Mussorgsky).  "The goal", says Aimard, "is to be a little lost while travelling from place to place....mixing fore-knowledge with the unexpected."

He's being modest. Humorous as it is, Collage-Montage 2010 is meticulously constructed, lots of internal links, very carefully planned. Thirty seven fragments in 80 minutes. Not a note wasted.

The talks at Aldeburgh this year really up the intellectual ante. Music and the Brain, they're modestly called but dwell on the science behind performance and perception.  Before this concert, there was a talk called "The Pianist's Brain, a two-part Invention", where Eckart Altenmüller spoke about how hands and brains work together to produce music. Not dumbed down, this Aldeburgh.

The picture above is Kurt Schwitters Spring Picture (1926). Schwitters did a lot of collage, bringing together ordinary objects like scraps of newspaper and formal painting. He was  a pal of Hannah Hoch. Some collages are a bit obvious. I chose this picture because it's subtle, magical, a lot like Collage Montage 2010. .
at June 24, 2010