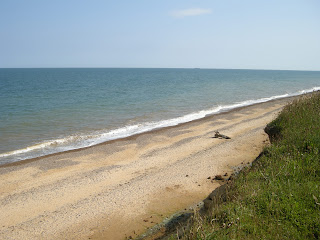 Aldeburgh is unique. It's not an all-Britten all-British festival. It has always been progressive and international. And it's not London. London can often be more provincial than Aldeburgh. as Britten knew very well. If only more Londoners knew their Britten!

The 2011 Aldeburgh Festival brochure is now out, full of excellent things. False controversy about the big first night, which sold out immediately. So what? Simon Rattle is one of the biggest names to come to Aldeburgh in years. He sold out the Royal Festival Hall and the Barbican a year before the concerts. And his Aldeburgh programme is exceptional - Messiaen's Et exspecto resurrectionem mortuorum (a Rattle favourite) and Mahler's Das Lied von der Erde – extremely perceptive pairing. This would sell out the Royal Albert Hall, so why the fuss about it selling out the tiny Snape auditorium?  It is being broadcast live on BBC Radio 3 which won't be quite so atmospheric, but will mean it's available to all. Let's not be hypocritical. The arts cost money and long-term Aldeburgh patrons have been supporting it for years. And why shouldn't people support whatb they care about?

Aldeburgh also doesn't do Grand Opera, which should come as no surprise to anyone into Britten's aesthetic. The spartan style intensifies the morality, intensifying the stark tensions. The 2011 Aldeburgh Opera is The Rape of Lucretia where the Greek drama concepts are clear. Choruses with major vroles but only one voice each.. What a cast - Angelika Kirschlager as Lucretia, Ian Bostridge (arguably the most intense Britten specialist of all), Susan Gritton,  Peter Coleman-Wright, Christopher Purves, Hilary Summers, Claire Booth and Oliver Knussen conducting.  This travels next to the Holland Festival and to Luxembourg, evidence of Aldeburgh's status in Europe.

Because Aldeburgh's conducive to chamber music and to experiment, it's always supported new music. On Sunday 12/6 there's a Homage to Ligeti. 100 Metronomes for fun but witty, Richard Steinitz for ballast and a series of excellent concerts from early afternoon til midnight. Britten, Rostropovich and the Cello  on 21/6 mixes talk, film and concerts. This year's featured composer is Marco Stroppa, culminating in the final weekend concert. Stroppa's music is being premiered with a new work by Peter Eötvös and Boulez ...explosante-fixe.... London Sinfonietta and Exaudi, so should be good. Other composers featured include Scelsi.

Exaudi are Aldeburgh regulars because their range stretches from early polyphony to the most avant garde work for voice.(The Aldeburgh style in a nutshell). What they're planning this year really is innovative. Everlasting Light is a reflection on Sizewell, where 50 years ago a nuclear reactor was built, turning a fishing village into Brave New World. This performance takes place late in the evening on the beach at Sizewell, blending Ligeti's Lux Aeterna with projections, singing and the landscape itself. Landscape meant a lot to Britten, so the idea of using the land itself as an element in art is very much in keping with the Aldeburgh ethos.

Song people are in for a treat. Matthias Goerne and Pierre-Laurent Aimard are giving the three Schubert collections on 18th, 19th and 20th, with a masterclass on 17th which I'll try to get to, as Goerne's gruff exterior belies exceptional insight and sensitivity. Two James Gilchrist concerts too, including Britten's Les Illuminations, one of the keystones of the repertoire.

Lots of early music too, Bach of course, and a special on Ockeghem's Requiem Mass  Concerts by Les Talens Lyriques and Christopher Rousset. Strangely, these are the main ones being broadcast on BBC Radio 3 this year.  Is it because they're "safe" ? A pity, as Aldeburgh isn't safe in the sense of predictable (and neither is this music if you think about it).

Britten loved visual arts, too, which is why exhibitions are also part of the Aldeburgh scene. This year there's a Philip Langridge tribute, curated by his son Stephen, the opera director. Video and audio clips, photos, personal memorabilia.  Unmisssable! My site carries more on the Aldeburgh  Festival than any other, so enjoy trawling thru posts of past years and related subjects.