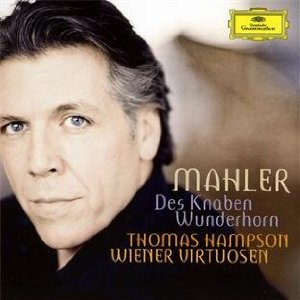 Mahler's Des Knaben Wunderhorn changed my life. Back in 1968, I heard the Fischer-Dieskau and Schwarzkopf version. I knew nothing about composer, genre, language or even western culture but I knew it was something I could not shake. Thomas Hampson's lived with Mahler and DKW just as long. Although he's grown older, if anything it's enhanced his depth of emotional engagement. He is the foremost Mahler singer of our time. This new recording is special because it reflects geunine Mahler scholarship, which Hampson has supported all his life.

The Fischer-Dieskau/Schwarzkopf recording was popular because it treated the songs like an extended  duet between two "characters". I've still got nostalgic feelings for it, but forty years of reasoned research into Mahler's practices have restored the songs to their original function, as commentaries on different and more universal human situations. Not an "act".  Even Das himmlische Leben and Urlicht, marked for female voice in their repective symphonies, can be transposed for baritone, as Hampson demonstrates. Hampson brings an extraordinary new depth to these songs. His voice may not be as lithe as it was when he was singing with Bernstein, but he's developed so much  that there really isn't any competition with the past. There's also no comparson with the  recording of Wunderhorn songs with Geoffrey Parsons. This more mature Hampson is singing with  the emotional power that comes from having fully experienced life. Incredibly well-judged phrasing, well-defined nuances, elegance, dignity and committment.

It helps greatly that Hampson is supported by the Wiener Virtuosen who play with exquisite clarity, so they create the "Kammermusikton" Mahler was so desperate to achieve.  As Hampson and Renate Stark-Voit (who's dedicated her life to Mahler research) say in their notes, Mahler wanted to create "a contrast between the lean-toned, chamber-like textures of the strings and the relatively lavish scoring for the winds and percussion....in this way the relative weightings of the instruments grouped around the singer achieve an altogether merciless transparency".

Merciless is the operative work. Bucolic as the Wunderhorn source poems may seem, emotionally they're sophisticated, not sentimental. Mahler had no qualms about changing the texts to sharpen meaning. He's not "setting" text but using it as a tool. Hence the unfussy, musically alert assertiveness of Hampson's singing, which works with the orchestra in equal dialogue. These songs aren't "voice with accompaniment" so much as miniature symphonies, where voice and instruments operate together. "A Kaleidoscope" as Hampson says in his Youtube promotion.

Meaning, too, is a Hampson speciality. Not for him the published order of the songs, which reflect nothing as the songs were composed separately over ten years. Instead he orders them by theme, linking Das irdische Leben with Das himmlische Leben and ending with Urlicht. The sequence brings out deep meaning. A child is starved and dies. Another child has reached heaven where no-one will starve because they believe. (Please read my post Why greedy kids in Mahler 4)  Starvation is a metaphor for faith, fortitude in times of struggle. It could be an image of an artist who doesn't get recognition on earth, but might in future. "My time will come" as Mahler said. But Urlicht anchors the theme firmly on a spiritual plane. The believer is so certain of what he needs that even an angel cannot change his path. Ich bin von Goot,  underr weider zu Gott! And listen to the punchline, where Mahler refers to light, illuminating the way to another state of life. Light and darkness, directional thrust, all ideas that pervade Mahler's work throughout.With this superb recording, you'll hear why the fashion for Mahlerkugeln isn't Mahler. (see also my post on Hampson's DKW DVD)
at February 09, 2011