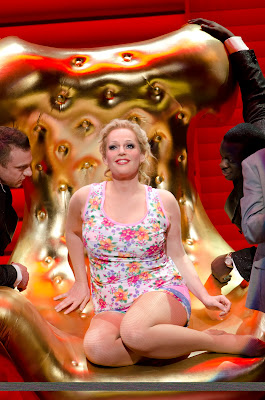 Paparazzi were flashing cameras outside the Royal Opera House for the premiere of Mark-Anthony Turnage's Anna Nicole. Like Hollywood!  Inside, shopping bags with Anna Nicole's face  emblazoned over the heads of statues in the foyer. The historic dioramas  of past productions inside the orchestral stalls area were replaced with sneakers, and a bra with cups so huge you could put balloons in them.  The famous red curtain looks amiss - it's been replaced by gaudy pink.  Bodybuilders in stilettos and Old Glory bikinis instead of  lion and unicorn. Anna Nicole's face beams down surrounded by the motto Honi soit qui mal y pense. "Stuff those who'd sneer" Which expresses the impact of this opera. Given what happens, I shouldn't use the term "in your face". Or as the fake Americanism of this libretto  (Richard Thomas) would put it, "in YER face".

Anna Nicole explodes immediately in a torrent of expletives delivered with the mindlessness of machine gun fire. So much so that it's incoherent, for meaning doesn't really matter so much as spewing forth. You start to think speech rhythms. But Turnage isn't Janáček. This was pure noise, calculated to disconcert. Because Anna Nicole Smith was an incoherent mass. Tacky trash as she was, her story is an indictment of a world that exploits and destroys. We ought to be cussing.

Unfortunately, the opera doesn't develop past this stage. It celebrates superficiality every bit as much as the society it might perhaps excoriate. There's no psychological insight into how a mess like Anna Nicole came to be. Instead a warped version of set piece musical biopic with stock characters that circle round the issue getting nowhere. 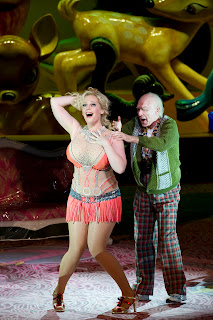 On the other hand, it's deliriously, hilariously funny! So much energy has gone into this production that you can't help be borne along by the enthusiasm.  Richard Jones was born to direct hyper-burlesque like this. He's helped by brilliantly imaginative set designs and costumes (Miriam Buether and Nicky Gillibrand).  Remember Richard Jones's Rhinemaidens from ten years ago? This time everyone's in a fat suit with mammaries the size of mountains. The sheer absurdity of the whole enterprise gives it a kind of manic thrust that replaces  the lack of momentum in score and libretto. In other hands, Anna Nicole could have suffocated under the sheer weight of  gibberish. Anna Nicole's boobs aren't real, and neither is this opera, but the impact is impressive. Just don't look too close!

Without Eva-Maria Westbroek's portrayal, this opera might fall flat. The strains are there throughout, like Anna Nicole's inflated front dragging her down and breaking her back. Westbroek  nonetheless manages to make the young Anna Nicole believable while she slowly morphs into the myth she creates for herself. She even makes the part sympathetic, for to some extent Anna Nicole knew full well she was playing a role in a fantasy. Now you see why I thought Westbroek's Elisabeth in Tannhäuser wasn't tame. Remember her Elektra from Zurich even earlier, where Westbroek's Elektra was a streetwise tough punk bursting with aggro. 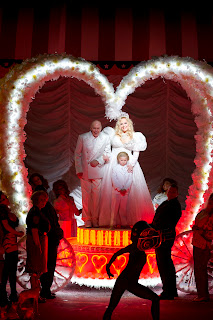 Gerald Finley is Howard Stern, boyfriend and lawyer. Schemer as he is, he's small beans compared with Anna Nicole herself who engineered her own creation as much as he did. Even scarier, the baby she bears is now being groomed for exactly the same media-mania by her father who wasn't Stern. Anna Nicole at least grew up in a relatively normal home. Perhaps part of Finley's muted portrayal stems from the fact that real-life Stern's culpability was overturned as recently as last month.  Depicting living people in opera is fraught, so the script had to be amended at the last moment to reflect the latest position. Shocking as the incidents are, all are taken from the public domain in the sense that they''ve previously been televised and reported. Relatively little was made up that wasn't there in the first place. Even the costumes in some tableaux come from press photos. Ultimately this opera is no more invention than documentary.

Susan Bickley sings Virgie, Anna Nicole's mother. Not quite the harridan her daughter claimed she was, but sorely put upon. Alan Oke sings J Howard Marshal II, the billionaire. He looks and moves like a geriatric, but how his face lights up when he sees Anna Nicole! He gets one of the best vocal opportunities, singing a whole aria reflecting on his life. Everyone else gets interjections, even Westbroek, who is often made to sing scales.

Despite all the publicity, hardly any mention anywhere of the music. Is this significant? While there's next to no music as such in the first act, there's more in the second and even a long instrumental. I hesitate to call it an orchestral interlude, because it doesn't develop themes like orchestral pieces usually do. It's certainly punchy and vivid, though what it has to say isn't much in terms of ideas.  I don't know if this is an adaptation of Hammered Out at the Proms last year, which I thought would be a great hit.  It turned out that it was based on a hit, by Beyoncé. In fact I thought the papparazzi were out in force because she was coming. She sounds like a real diva and should have been in the Royal Box. 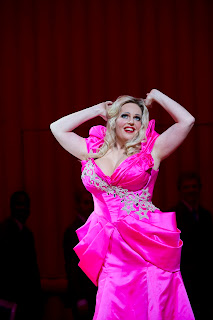 Turnage has been through a long creative drought, and this is his first really big breakthrough in years. Because the performances are electric and the staging gives the opera life,  In some ways maybe Anna Nicole is Turnage's story, too. With this he's found fame and wealth but he's had to make trades to get there. Anna Nicole is a load of tosh as music, but as theatre it's glorious, guilt-free pleasure. It's tremendously good fun if you let your hair down and switch off your brain. I had fun bopping along. On the plus side, there were lots in the audience new to the Royal Opera House, clearly enjoying themselves too. And why not ? Presumably they'll move on to more and keep coming back. Beyoncé.herself starred in a hip hop version of Bizet's Carmen. A creative adaptation of a universal meme.