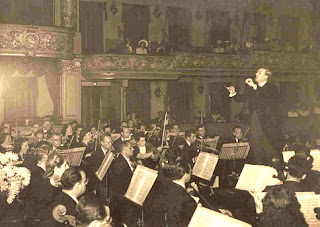 Eugen Szenkár, Mahler conductor? Most people don't know who Szenkár (1891-1977) was at all, far less his track record in Mahler. But he was quite a significant figure in his time. It was he who premiered Béla Bartók's shocking The Miraculous Mandarin in 1926 and was attacked by Konrad Adenauer, then Mayor of Köln. "Szenkár", he said, "that piece of filth must go!" before banning further performances.

Bartók knew Szenkár, a fellow Hungarian, and obviously trusted the then young conductor to take on the difficult, innovative piece. Nonetheless, the composer, oblivious to the near riot around him at the premiere, grumbled "Eugen, on page 34, I specified mezzo-forte for the clarinet! I could not hear it!".

Szenkár, like Jascha Horenstein, was forced out of Europe by the Nazis – to Russia in 1934, to South America in 1938. The photo shows him conducting in Buenos Aires in 1939.  He is known to have conducted at the famous opera house, Teatro de Colón and also in Rio de Janeiro. He also reorganized local orchestras. Perhaps Daniel Barenboim's parents knew him?   And Erich Kleiber, who had premiered Wozzeck and had moved to Argentina in 1935 ? They were all part of a flourishing émigré community. Szenkár returned to Germany in 1950, conducting in Mannheim and Düsseldorf, where he died in 1977. He was by no means an obscure conductor, as his continuing relationship with Bartók indicates.

Mahler was not, as popularly supposed, forgotten after his death, for there were many performances of his work among the "modern" young guard. Willem Mengelberg  maintained an unbroken tradition in the Netherlands, and Carl Schuricht started a festival in Wiesbaden in 1923. During 1926 Szenkár conducted several Mahler symphonies in Germany.Thus he was recognized in the field and was awarded a Gold Medal by the Mahlerverein after the war. 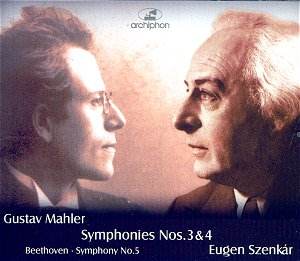 Szenkár's recording of Mahler's Third Symphony was made in Köln in March 1951, a few short months after Scherchen made the first ever recording. Because Szenkár was so connected in that period, his recording needs to be studied to get an idea how early Mahler interpreters thought about the symphony. What's striking is how Szenkár emphasizes the marches in Mahler's sunniest, cheeriest symphony. There are marches in this symphony for a a very good reason."Summer marches in", as Mahler said. It's vigorous and drives away all traces of winter in its path  There are references to Dionysius, the God of Misrule, whose followers drunkenly disrupt society around them. But also, there are links to Socialism.

Mahler was known to have sympathies with the left. Workers' movements were active in Germany and Austria. Even Alma noted that Mahler walked alongside a worker's procession. Whether he was merely curious or showing support, we don't know, but he is believed to have voted for the left and certainly was well aware of the issues. Indeed, when Richard Strauss conducted Mahler's Third, he said that the marches made him think of workers' processions, and men marching in solidarity. The relevance, then, for conductors like Szenkár and Horenstein, becomes clearly obvious. They knew all about Hitler's Brownshirts, the Spanish Civil War and the suppression of the left.

Szenkár’s marches capture a rough and ready proletarian feel. Real marching men's brass here, these, played by musicians who had heard a lot of marches in their time, both socialist and national socialist. Militant and military, and still painfully relevant in 1951 when the Cold War split west and east Germany. There is a real grimness to this playing, which even goes beyond Mahler's exhortation roh dreinblasen" (raw and crudely blown). One of the horns manages a bizarre, almost jazz-like flavouring which is not so surprising when you remember what jazz meant in the Weimar Republic and how the Nazis hated it. The orchestra is the Kölner Rundfunk-Sinfonie-Orchester, some of whom might have remembered Adenauer's conservatism and had mixed feelings about capitalism, even if they didn't adhere to communism.

Szenkár keeps a solid, steady rhythm which underpins the different sections in the Erste Abteilung. There are few dramatic contrasts. Even the massed horn fanfare towards the end doesn't shake the sense of relentless marching. This is a very "military" reading, good at capturing "Das Gesindel" (the rabble) with its resonant bass drums and lack of dramatic contrast, even in the famous eight horn fanfare.

The second and third movements are played relatively straightforwardly. Szenkar doesn't make much of the savage irony in the Ablösung sections which do so much to give the symphony its characteristic black humour. However, the posthorn interlude is bittersweet and nostalgic, heard as if from a distance both in space and time. The finale is played through quickly, hardly evoking the horror that Mahler perceived below the surface. Given the gravitas of Szenkár's approach, much might be expected of the critical "O Mensch!". Indeed, the soloist, Diana Eustrati, a Greek alto, makes this perhaps the most successful part of this performance. She sings with dignity, infusing real sincerity into " Doch alle Lust will Ewigkeit". The boy's choir is also excellent – bursting with joyous confidence and exhilaration, a counterpoint to the Dionysian march in the first movement. Eustrati's voice contrasts well against the background of bimm-bamms. Even the orchestra, for once, joins in the exuberance. The final movement draws together the reverence of "O Mensch" and the optimism of the choir, in a shimmering contemplation of bliss. Szenkár's steadiness helps weave a texture where all the elements balance to create a seamless feeling of light.

This recording is on a tiny label, Archiphon, issued about 8 years ago. No way will this appeal to the current fashion for Mahlerkugeln! Nor to those who swallow the "Vienna City of Dreams" mythology.  It's not even one to listen to for "fun". The orchestra is more enthusiastic than good! But it's an extremly important insight into a much deeper level of Mahler's mindset. I don't think you can evaluate this symphony without knowing Szenkár, or Horenstein's Mahler 3. Now maybe you can understand why I think so very highly of Simon Rattle's Mahler Third with the Berliner-Philhamoniker.  Obviously Rattle and the Berliners don't access the same militancy, but they have that energetic, vigorous spirit of conviction. Nature marches on, like mankind, and neither gets suppressed.
at February 27, 2011

Thank you for a fascinating review and comment. I had not recalled the name of Szenkár, even though I am a Barók fan. It would be fascinating to hear this recording.

And I fully agree with your thoughts on Rattle's Mahler 3 from Berlin. What a performance! I can't imagine it being improved in his subsequent London rendition, which I did not hear. Rattle seems to get a perfect tone and balance for the marches in movement I--I have known Mahler 3 for decades and while there are many good performances, this one seems to bring out so much in the march episodes, not to mention the rest of the symphony. Fully characterized playing all around, with wonderfully weird oboe glissandi in movement IV (and yes, a superb and unique vocal soloist!). There is nothing like a chorus singing its native language, and the choruses in movement V are top-notch here as well. Best to you, keep up the great blog!