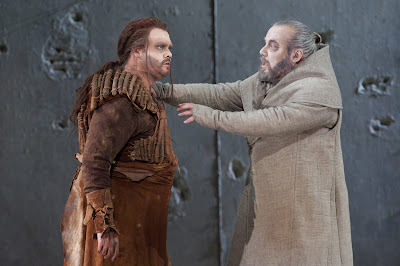 Wagner's Parsifal returned to the ENO Coliseum last night. It's the hallowed Nikolas Lenhoff production first seen in London in 1999, commemorated in the 2005 DVD from Baden Baden (see more here)  It's extra special because of Sir John Tomlinson. He's a Great Britiish Institution.

In years to come, Tomlinson will retire gracefully so any opportunity to hear this great Wagnerian in a major role is to be cherished. He is one of the few singer actors who can command a stage, occupying it by sheer strength of personality.It doesn't matter if time has frayed the edges of Tomlinson's majestic voice. The centre is still firm and authoritative. Gurnemanz is wise because he's experienced. Tomlinson convinces because he is, too. Perfect fit. One day, we'll look back and be able to say we heard him still in his prime as this striking Gurnemanz.

Stuart Skelton impressed when he warmed up. The further he gets away from "innocent fool" the better he functions, which says positive things about him. Iain Patterson and Tom Fox were Amfortas and Klingsor erespectively. Waltraud Meier created this Kundry so indelibly in Baden-Baden that it would be unfair to compare her to anyone else. Jane Dutton, called in at short notice, sang heroically in the circumstances. Don't assume that because Titurel is little more than a husk that the few moments he sings don't count. Andrew Greenan's sturdy, resonant singing made Titurel feel like a powerful life force despite the decreptitude around him. 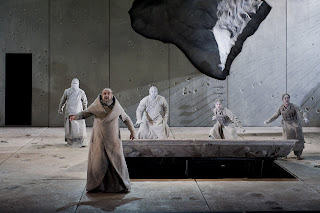 Everyone in the audience, though, seemed to want to talk about the production itself.  What I like about this production is that it raises questions and suggests multiple meanings. Immediately, the first scene confronts the inner reality of Monsalvat. The crater in the wall is a dramatic metaphor for what has happened to Monsalvat. The community has been knocked off its normal orbit, so to speak, shattered by the impact of Amfortas's tragedy. Everything's out of alignment, cosmically and spiritually. The community moves about in slow motion as if in traumatic shock. 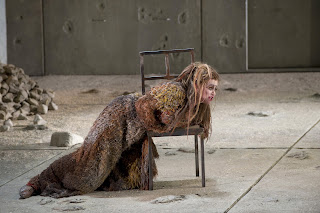 Jon Vickers pulled out of Tannhäuser because he supposedly thought it was irreligious. Yet Parsifal was one of his great roles, and the theology in Parsifal is outright blasphemy.  Despite the Good Friday, Communion wine and  Grail themes, Wagner's mainly interested in Christianity insofar as it provides material for his own dramatic ideas such as sacrifice and redemption. In the Bible, Mary Magdalen is a marginal figure. In Parsifal, Kundry is the pivot that connects Jesus to the Devil (Klingsor) to the Knights and ultimately to Parsifal, their true Saviour, rather than Christ.The Knights may be misogynistic, but Wagner isn't. His heroes are often women. Kundry is kin to Brünnhilde, who rights wrongs even if it means going against the Gods. You could compare the ennui that falls on Monsalvat to the way the Gods in Das Rheingold suffer when they're deprived of golden apples. 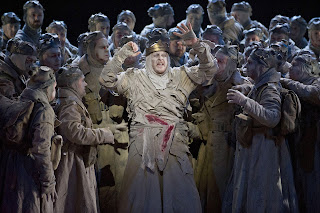 Downplaying the cod-Christianity in Parsifal opens out a wider perspective of Wagner's ideas. The Knights of the Grail didn't exist, Kundry can't have lived a thousand years.  But the First Emperor of China did.  Significantly, Nikolas Lehnhoff's original production was devised in the wake of the first big exhibition of the Terracotta Armies in Europe. While that's not so apparent to us now, in 1999 the references would have been obvious. The First Emperor wanted to be immortal. He built his palace on a lake of liquid mercury, which gave him pretty much the same symptoms as Amfortas. The zombie-like pace in Montsalvat had an ironic precedent. Hence the Knights are dressed like Terracotta Warriors. They embody the idea of a military order whose mission is spiritual and cosmic. Lenhoff even has Amfortas crawl into a pit like those in the excavations in Xian.  The Knights are regimented, stiff and unexpressive, intensifying the contrast between their "virtue" and the wild animal sensibility of Kundry and the young Parsifal.

The Flower maidens represent Nature, too, but an ultimately poisoned version. Lenhoff's realization is beautifully lit, and the chorus moves enticingly. In nature, petals and scent trap bees for pollination. These Flowermaidens have pretty, petal-like sleeves, but their headdresses are like stamens, and they wield pistils (in a bizarre imitation of the Knight's weapons). Yet the headdresses also reference Tang Dynasty tomb figures. Beautiful, but deadly. 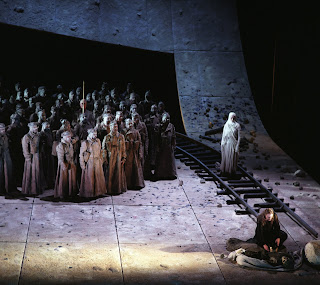 Similarly, Lenhoff and his designers (Raimund Bauer and Andrea Schmidt-Futterer) portray Klingsor and Parsifal in the Third Act as bizarre inventions on a Samurai theme.  Tinturel's costume refers to the tomb where a prince was found encased in chain mail made of jade, reputed to confer eternal life. Warriors, but aliens, outside the Christian tradition, just as the Knights of the Grail really are.

Lenhoff  keeps the Parsifal-Kundry-Knights dynamic occupying the foreground, with Gurnemanz as mediator, because this is the centre of the drama. Attention shifts from kitsch medievalism back to universal themes like sacrifice and eternal life. The non-western references are background, so they enhance if you notice them, but don't intrude, though even the most inattentive observer should be wondering why these aren't Proper Christians. Because they're not and never were!

Liberating the narrative from the pseudo-religious trappings frees the drama. This production is infinitely more dramatic than Klaus Michael Grüber's 2002 Parsifal at the Royal Opera House where the Knights were so comatose that they had to be moved on pulleys dragged across the stage. Haitink dutifully conducted at a funereal pace, perhaps in keeping with the idea of Monsalvat Moribund, but more of a mystical than a theatrical experience. Mark Wigglesworth responds to the livelier staging with acuity. What his conducting may lack in refinement, it's made up for with full-bodied vigour. Amfortas hovers between life and death, but it's not good for the whole Grail community to stay that way. Parsifal represents movement and life.

Which leads to the conclusion. Kundry is baptised and now appears in a shroud. Ironically this is one moment when Christian ideas do apply. Kundry is dead but her soul lives on. By her spirit she's helped redeem the kingdom. Thus I don't have any problem with her walking along the railway track. Symbolically, she's heading "back to source" from whence she, and the Knights, and all mankind, have come. You don't  need a dove when you've got Kundry as dove. The railway track may also be a reminder oof the Rainbow Bridge in Das Rheingold, which marked a transition. This time, though, it's a path to genuine salvation.

As usual the use of English doesn't help meaning. "I have an idea" sings Parsifal, except musically it's scanned " I have an i (long pause) dea", which sounds like he's telling Gurnemanz that he has "an eye, dear". Then Gurnemanz, instead of telling Parsifal "suche dir, Gänser, die Gans!", talks about ducklings, losing the punch as it were. Sometimes deliberate humour serves a purpose, as in Orsini's drunken songs in Lucrezia Borgia, but in Parsifal, I'm not sure jokes fit.
LOTS MORE Wagner on this site - please see labels list on right
Photos : Richard Hubert Smith, courtesy ENO
at February 17, 2011

Will be going to this as my v first exposure to Wagner today; found these notes very helpful. Thank you.