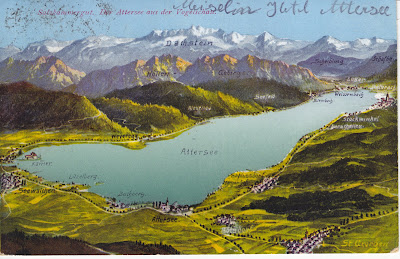 "Every experience is unique" says Fergus McWilliams, horn player of the Berliner Philharmoniker in the broadcast now available online of Mahler's Symphony No 3 conducted by Simon Rattle in Berlin earlier this month  (Full concert also available in the Berliner Philhamoniker digital concert hall). McWilliams knows what he's talking about, since he's a 26 year veteran of the orchestra. He speaks of  "new altitudes reached...new base camps established for ever higher ascents". Interesting words, for this performance really feels embedded in the mountains, which meant so much to Mahler. 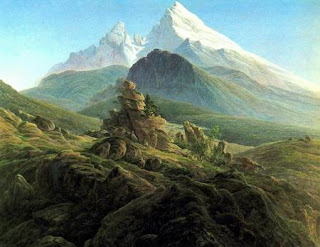 To 19th century artists, mountains represent Nature in its most pristine, powerful form, wild, untamed as far from urban proprieties as possible. Expand the photo and locate Steinbach am Attersee in the top right, where Mahler had a small composing hut at the water's edge. A massive cliff hangs over the village, which is approached through a narrow and very steep pass in the Höllengebirge. Behind this range, the even more imnposing Hohen Dachstein, covered in snow all year. Mahler hiked and mountain biked, once suffering a fall so bad he was nearly killed. Spectacular as mountains are, they're dangerous and unpredictable. But that's precisely what makes them so inspiring. Mountaineers feel a communion with  nature that's profoundly spiritual.  Climbing is a kind of pilgrimage which lifts you right out of the sphere of ordinary existence. Some say, the ultimate challenge:  making petty ego utterly irrelevant. Think about the trajectory of Mahler's music and its unending search for transcendence and higher planes of existence. Mountains are a metaphor for the soul and for Mahler's music. 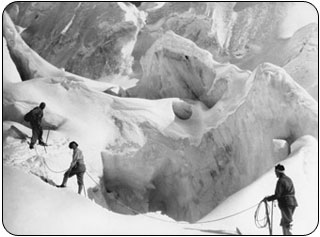 In this Berlin performance of Mahler 3, Rattle and the Berliners create an extraordinarily prescient image of the mountains. Mahler 3 is often considered the most cheerful of Mahler's symphonies, but on a deeper level there's much more to it. Adrenalin doesn't flow unless you've risked something. Peaks aren't reached without effort.  Thus the bedrock of the symphony is the massive first movement. Mahler seems to be building mountains into the music. The solid blocks of sound have an almost geological intensity. The Rite of Spring before Stravinsky, Et expecto resurrectionem mortuorum before Messiaen. 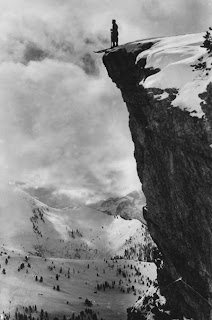 Follow these blocks as mountains and the structure of the sprawling first movement reveals its true logic. Hear the steady tread of footsteps which give the music a pulse. Right from the start, a sense of danger - muffled rumblings from the basses, like ominous clouds, then suddenly the wild sweep of trombones - an instrument that looks as expansive as it sounds. With each progression, the music develops into a panorama, like a circle of mountains. Each peak gained reveals new vistas, spurring  the music forward and upward.  Stunning ascents, each more spectacular than the other (listen for the horn) yet the Berliners don't lose touch with the darker, craggier aspects in the music. There's violence here. The trudging footseps become a determined march, the timpani beating staccato like machine gun fire. Storms and danger never far away, like the low, brooding strings at  44', magnificent and sculptural. Oddly, I thought of Horenstein's dark Mahler 3, with its glowering crags. What might Horenstein have done with an orchestra like the Berliners?  Even more energy in this performance than in the recent Mahler 4th, for a good reason. Traversing this movement is strenuous. Losing momentum can turn it into mush. So Rattle and the Berliners take risks - as mountaineers do - so the peaks when reached are all the more exhilirating.

With these fundamentals established, the next sections can be more relaxed., literally "ohne hast". The Berliners do the details with great lyricism. Birdsong, flourishes on the clarinet like moments from Das himmmlische Leben. circular shapes that dance. It feels like open alpine meadow, the solo violin playing exqusitely nostalgic melodies. Yet no stasis. The offstage trumpets call, from the "heavens" above, answered by the brass in the "earthly" orchestra. Both exqusitely beautiful in this performance. Yet immediately the mood is cut by Dionysian swagger. Summer rushes forth with unstoppable vigour - listen to the brass repeat the birdsong, but with sass and rude health. Kukuk ist tod, kukuk ist  tod - but not for the moment!  Summer is short in the mountains, as the lingering call of the distant brass reminds us. But while it's here it's glorious, as the rush at the end of the second movement reminds us. 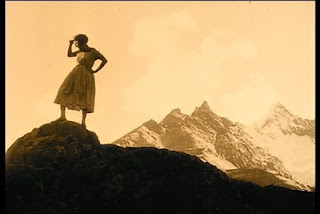 Natalie Stutzmann's voice doesn't lend itself easily to many parts of the repertoire but her O Mensch is perfection. Stutzmann doesn't do diva. In a piece as deep as this the emphasis must be on meaning, not magnificence. Stutzmann's lack of self consciousness is wonderful. She realizes that outward appearances are irrelevant, almost offensive, for what Mahler is getting at here is the sublimation of ego, Stutzmann is wonderful because she sounds like a primeval spirit, an earth goddess, perhaps, a darker version of Dionysius. The flute winds round her voice at once seductive and malevolent, snake-like. It feels like a lament from the beginning of time, as clarinet and horn take up the wailing theme, interspersed with whip-like string interjections.

Stutzmann's so powerful that she infuses the glorious final movement with graciousness. All round her the bright, cheerful voices of the boys in the Berlin State and Cathedral Choir and the women of the Berlin Radio Chorus. Ecstatic happiness, yet an apotheosis won at a cost, as Stutzmann's dignity reminds us. The bimm-bamms are angels and church bells tolling, as they do in the Alps, but there's also something much deeper in this performance. It feels like a communion with the essence of nature where man's tribulations are rendered trivial. Transcendence of the self:, the spirit of nearly all Mahler. Das Lied von der Erde looms into view. Rattle and the Berliners are onto something profound, completely against the current trend towards soft centred performance practice, but more in tune with serious Mahler scholarship.  Mahler couldn't stand the cosy social whirl of cities like Vienna, and couldn't wait to get away.
Please also see Miltant Marching Mahler Eugen Szenkar's 1951 recording of Mahler 3.


More on Mahler on this site than most, please search and follow the labels.
at February 25, 2011

Thank you for all the links. I did not realize all that was on offer on BBC3 and in such good sound. In Mahler 3, plenty of unheard details and atmospheres came afresh, especially the opening movement, alongside the full blended or deeper moments. I was glad also to hear Boulez in bright Stravinsky as a prelude in the same retransmission. Had only the last (but truly grandiose) minutes from the Abbado yesterday but will definitely take advantage of the days left for the rehearing.