GSMD Opera - Dialogue of the Carmelites 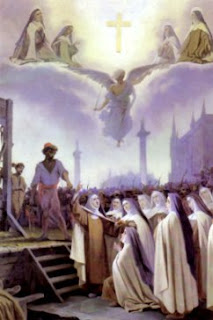 Another Guildhall School of Music and Drama production coming up this week - Poulenc's Dialogues of the Carmelites.  All GSMD events are interesting because those involved are fresh and motivated. This opera's full of high drama - cloistered nuns, holy fervour, the French Revolution and the guillotine. Death and sex (or rather the repression of sex). Be prepared for an eventful evening. FOR THE FULL REVIEW CLICK HERE

Guildhall productions are always worth supporting because students need the experience of performing and public feedback. Not everyone becomes Bryn Terfel (graduated 1989) but all benefit. What better training in presentation skills, organization and public interaction? These are great skills in any business. GSMD delivers more than "just" the arts.

GSMD operas are always stimulating, even when they're over the top, because the students have energy and committment. Past productions have included Sallinen The King Goes Forth to France, Rossini La cambiale di matrimonio, Martinu The Marriage and the rarity Spinalba by Fransceco d'Almeida which had a lot more going for itb than most realized.

GSMD students work with established professionals, so they hone their skills. This GSMD production will be directed by Stephen Barlow, well known for his stagings of Fantastic Mr Fox, Tosca, and Hansel and Gretel at Holland Park. He's also worked at Glyndebourne, ROH and the Met. (He's not the composer Stephen Barlow, married to Joanna Lumley). Conductor will be Guildhall regular Clive Timms.

But it's the students we really go to hear. Some good names to listen for : Gary Griffiths, Koji Terada,  Natalya Romaniw and many others. Ensemble work too is always enthusiastic. Terada and Romaniw are two of the four finalists in this year's Guildhall Gold Medal, to be awarded in May. (The other contenders are Ashley Riches and Victor Sicard.)