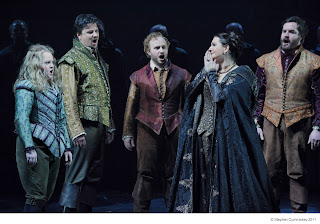 At last the ENO experiment of using directors from fields other than opera has been totally vindicated. Mike Figgis isn't an opera director but he is an innovative film-maker, so he knows what makes good drama. And few stories could have more dramatic potential than Lucrezia Borgia. Incest, blasphemy, violence, sex - far more scandalous than the tacky Anna Nicole Smith. Mike Figgis hasn't just directed Donizetti's Lucrezia Borgia, he's transformed it. The original opera is there, intact, but it's framed by short filmed passages that add background and depth. The films don't intrude, but enhance. 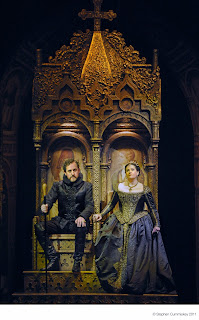 Frames are a recurring theme throughout. Gennaro (Michael Fabiano) and Orsini (Elizabeth DeShong) talk framed by a proscenium arch. Later Lucrezia (Claire Rutter) and her husband Alfonso d'Este, Duke of Ferrara (Alastair Miles) appear on an ornate, golden throne. It's stunning. But look carefully, it's a giant version of the tabernacle on a Catholic altar, which opens to reveal sacred objects. Lucrezia's father was the Pope. The Duke's court looks magnificent, but it shields sinister secrets. It's horrifying, yet done so subtly it might be missed. (Which is exactly how these folk keep power.) Boxes within boxes. The filmed parts grow from the ideas of concealment inherent in the story. 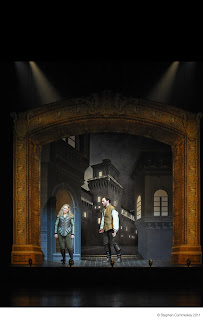 Yet Donizetti seems more concerned about Gennaro. Cesare Borgia and Pope Alexander VI don't even appear in the opera. Yet why do the Borgias cause such fear and hate? Doesn't Gennaro wonder who his father is?  His friends are out for vengeance but are easily distracted. Even when Gennaro is fleeing for his life, he stops so Donizetti can write delightful comedy arias for cross-dressing Orsini. So much for dramatic logic! There's hardly any psychological depth.  Maybe it's easier just to blame women for everything without going into the whys. Perhaps that explains the opera side of this production.  Movements are stiff and artificial. The stage is flatly one-dimensional. Artifice, not reality. The scene where Gennaro's friends gather is based on The Last Supper. Which it is, for them. Gasps from the audience, but why not? Themes of betrayal and poisoned chalices run through this tale. Shocking as the scene may be, it's a lot less sacrilegious than the Borgias were.

Significantly, Figgis is presenting the opera "as is". Those who hate Regie have no business complaining here. Figgis is under no delusions that anyone can become an opera director overnight. That's refreshingly honest, since good opera direction requires some musical nous. (Figgis is in fact a musican). Instead he does what he does best, by making the films that fill in the background, and give depth to the characters. The depravity of the Borgias was too much for Donizetti to depict, and would not have got round the censors in his day. Figgis goes for the jugular. As his actresses prepare for the film, they talk about historical incidents, such as the brutality of the 16th century sex trade and the vicious punishment of Jews. You flinch, but you should. The films also act as Lucrezia's memory. She relives the birth of Gennaro, and the murder of a young servant, which is so brilliantly filmed that you wish Figgis would make a full scale movie.  Before she marries the Duke of Ferrara she's got to prove she's a virgin, which everyone (includimg the Duke) knows is a humiliating farce. These films allow the director to expand upon and comment on the opera without doing much to the original at all. 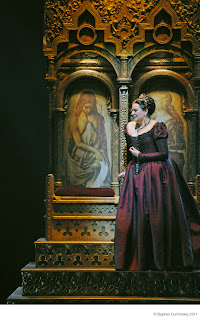 Innovative as this approach is, it probably wouldn't work with a less stylized opera. Nor, perhaps, one more expressive orchestrally. Claire Rutter is impressive. She's easily got the most rewarding part to sing and she makes her presence felt. Michael Fabiano sings more convincingly than his role allows. Elizabeth DeShong, Alastair Miles and supporting singers are good, too, but this isn't the most demanding of operas.

The translation doesn't help. At times it felt that the singers were obeying their natural sense of line and intonation, but drawing back to fit the text. That's a problem with English in general, which isn't as melodic as Italian. The overall sound of an opera communicates, not just words. Some horrible rhymes that tried to be funny but weren't. Orsini's lines, though, were so wacky that they worked in an anarchic way. "Let's respect the protocol, and not indulge in alcohol" and "Chianti! the wine of Dante!". DeShong's delivery was so lively that I realized at last what Orsini's role in this opera might be. The silliness is deliberate, like whistling in a graveyard. Donizetti didn't do all that much about Lucrezia but thanks to Mike Figgis and ENO, we can approach her story in parallel ways.

Another interesting thing about this approach is that it makes the production portable. It can be recreated in different houses and revived at different times. Joint productions are the way to go in this age of austerity and this one transports readily at minimal cost. This raises the possibility of the opera being sung in Italian (since the film is in Italian) It's good enough to experience more than once. Artistically and financially, this one pays off. A better version of this piece will appear shortly in Opera Today. Please check that site, where there';s a FULL streaming download (in Italian), libretto, discography etc. Useful resource!
Photo credits: Stephen Cummiskey 2011, ENO. Details embedded.
at February 01, 2011

Reading 'chianti, the wine of Dante!' made me laugh out loud but not, I suspect, in the way the translator intended...