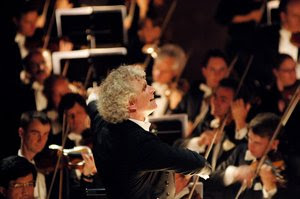 Seldom have I heard a more gloriously ecstatic beginning to Mahler's Fourth Symphony than this performance at London's Barbican with Sir Simon Rattle and the Berliner Philharmoniker.

Those sleighbells aren't there by chance, just to add folksy Wunderhornish whimsy. In Mahler's time, people heard lots of sleigh bells, and were connoisseurs, perhaps, of different kinds. Mahler began this symphony at the end of winter, just before the snows began to melt. Perhaps he had a mental image of sleighs hurtling forwards, their bells shining and so clear-toned they could be heard a long distance away. Perhaps he visualized the intense brightness of a snow-covered landscape where the UV hurts your eyes.  Certainly the brightness in the final movement of Mahler's Fourth Symphony refers to the brightness of heaven, and happiness so dazzling that even St Ursula, the warrior vigrin, bursts out laughing while her murdered acolytes dance. The sorrows of earthly life are obliterated by the joys of Heaven.  Angels, trumpets, dances, feasts and plenty, Daß alles für Freuden erwacht.

Rattle's unusually effervescent first movement was a wonderful herald. The joyful sleigh bells carry through into a lively but very tight pulse. The exuberance seems all the more exhilarating because it has a firm base. Such dynamism ! It's as if Rattle were leading a team of stallions. Yet such lightness of touch, too. There's sass in this playing, too. Mahler is being audacious. The symphony started out as a Humoreske though it resolves on a religious image. The brass have pizzazz, the winds blast and bleep, and whenever they can, the sleighbells break cover, adding merriment.

I haven't seen the First Concertmaster Daishin Kashimoto before, though I may  have heard him. He has a very individual sound, bright and distinctive. The Leader's role in the second movement of this symphony is critical. In his solos he has to express the devil himself, fiddling souls to hell. In the context of this performance too much grotesquerie would have been wrong,  but Kashimoto gets just the right degree of demonic panache.  Part way into the third movement, Rattle started to stretch the dynamics a little too much to emphasize the restful mood, but the underlying energy quickly stabilized the balance. The coda flared up magnificently, giving way to exquisite calm. "ethereal, church-like, Catholic in mood" as Mahler told a friend.

Christine Schäfer has probably done more performances of the Finale of the Fourth than anyone else, so she's always worth listening to, and she isn't always the same. Sometimes she sounds etherally vulnerable, like a child. Tonight, her voice was darker and rounder than usual, which fitted nicely with Rattle's robust , vibrant approach. The voice represents a soul that's found joy through faith, so Schäfer's conviction worked well. Wonderful detail in the orchestra. Winds bleated as the lambs meekly let themselves be killed by St John. Celli swooped downstroke in perfect unison, like the thrust of a sword as St Lukas slaughtered the oxen. Violins skipped like the fish dancing in St Peter's net. And suddenly, the music dissolves into silence and the magical vision disappears.

If anything, Stravinsky's Apollon Musagète (1947) was even more impressive, not only because it's less familiar than Mahler 4th. Although there was no ballet to watch, the Berliners played with such deft precision and energy that you could feel the physical impact of the music. Exceptionally wonderful playing, so good that I even dared wish that it might be followed by something other than blockbuster Mahler.

As always reflection deepens the experience. Rattle's M4 is unorthodox because his first movement is so exceptionally energetic, rather than burning along til the finale as some do. But his approach makes total sense because he';s sussed where the energy in the ,music comes from and why it;s there. The first and last stand like two pillars, so the resolution is a natural outcome of the "life force" that surges thru this symphony.  That's relevant in the light of recent Mahler studies (until the retrograde anniversary year) which focus on  Mahler's personality and intelligence rather than the old maudlin death neurosis. Mahler likes life because it beats death : it's exciting and vibrant. Rattle's M4 is like his M3, inspired by nature and sturdy dionysian determinism. The very spirit of life! INFINITELY better that a conductor thinks afresh and takes a point of view than regurgiates pap. More on M3 soon.


PLENTY more Mahler on this site - see labels! For a summary of the Berliner Philharmoniker Mahler year, please follow this link.
at February 22, 2011