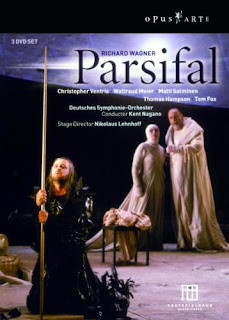 Nicholas Lenhoff's Wagner Parsifal comes to the ENO tonight. It's well known from the 2004 staging at Baden Baden which is available on DVD. It's generally a respected production although there will always be those who feel threatened by anything that's not museum piece. Certainly Lenhoff is a cut above the average (excluding the Alden brothers who are so good)

For the link to the review of the 2011 ENO Parsifal at the Coliseum, see HERE.

Please follow this link to a review in Opera Today from 6 years ago. "First, Lehnhoff has an unorthodox view of Gurnemanz, whom he characterizes not as the sacerdotal father-figure familiar from conventional productions, but as a reactionary, unhinged authoritarian bereft of genuine human feeling. Second, Lehnhoff finds that if there is any redemptive message in Parsifal, it describes an enlightened humankind that has discarded impotent, atavistic religious ritual and doctrine. ....Lehnhoff believes Parsifal is essentially a utopian work, where utopia is a dynamic principle that has nothing to do with religious tribalism or any other fixed identity." Unorthodox, but not amiss. Livelier too than the ROH staging, where the Knights were wheeled on and off stage on a pallet, like frozen corpses..

When i saw this DVD I was entranced by Kent Nagano's playing, so lucid and transparent yet not  specially drawn out. Enough slow mo in the opera!  What I noticed at the time was Waltraud Meier's Kundry, a wild, feral creature  totally at odds with the Knights, as stiff and immobile as Terracotta Warriors. That's a point since the Emperor who ordered the warriors believed in an elixir of Immortality, without which he and the nation would wither away. Most interesting is the dynamic between Kundry and the Knights, Gurnemanz, Parsifal and Amfortas and the striking apparition that is Titurel. As described in the review "Thomas Hampson’s Amfortas is not, as would be customary, an object of mixed reverence and pity, but he is relentlessly pursued and harassed by his desperate knights. He never enters in solemn procession, but always in full flight from his own followers, frantic to evade their demand that he celebrate their liturgy. This Amfortas must have the strength to run. Accordingly, Hampson’s Amfortas is less prostrate, less helpless, and more histrionic and physical than most."

Obviously we won't be having Nagano, Hampson, Meier and Ventris (whom I think is brilliant) but that's too much to expect. At least we'll have a thought provoking production which will make us think about what the characters mean. Better to be challenged to engage with the opera than auto pilot wail. No-one needs to get everything right away, but with Wagner, the process of engaging is part of the experience.  Stagings like this don't come round very often.
at February 16, 2011