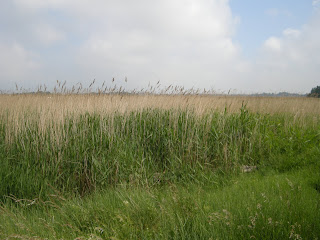 Limited internet access just yet so I'll be brief,  but major news!  Last night at Aldeburgh, Benjamin Britten's Rape of Lucretia. Astounding performance, conducted by Oliver Knussen who understands Britten's deep inner quirkiness. Britten was never "Establishment". Snape is surrounded by reed beds. An outside observer might assume that they look orderly and tame, like soft grasses. But venture in and nothing is as it seems. Reeds are tough, they're used for building. They grow in marsh which is neither land nor water. Myriad wildlife - birds, insects, animals you won't find elsewhere. And through the reed beds at Snape continue on through the  whole delta to Aldeburgh and beyond.

So too with Britten. He's spikier, tougher, rougher than one might think, and the undercurrents in his work flow in murky, mysterious ways.  The orchestra was the Aldeburgh Festival Ensemble, thirteen hand-picked musicians,  top players from big-name orchestras.  Knussen's quirky too, in a different way, but that helps him access the more disturbing currents in Britten that perhaps reveal more about his art.  Knussen  highlights the dark murmurings, the shimmering harp and violins.  Vocal parts merge with orchestral. Britten opera isn't like conventional opera,  the dramatis personae grow from the music, rather than from the narrative as such. Hence the Male and Female Chorus, which comment, fill in background, and expresses what the characters cannot say. Britten's drama isn't naturalistic, but stylized. It isn't simply because Britten's writing quasi-Greek (Early Roman) narrative.

This emotional opaqueness is very much Britten's personal signature. As a man and as an artist, he shielded his deepest sensitivities. Clubbable he wasn't. Thank goodness! But that is also why The Rape of Lucretia is dismissed by those who don't realy understand Britten's work.  He was fascinated by early forms of music, seeking means oif expression that weren't 19th century verismo. Hence Midsummers Nights Dream and Gloriana, for example where form itself becomes integral to meaning. Britten uses structure as an emotional cloaking device. Penetrate the code, as Knussen does, and The Rape of Lucretia makes even more sense. Lucretia  is yet another Britten innocent, destroyed by the venality of the public world. This rape isn't erotic but a weapon of political aggression.

Ian Bostridge and Susan Gritton sang the Male and Female choruses. Both excellent, but Bostridge was outstanding. He can be very variable, but when he's inspired like this, he's transformed.  No-one , not even Peter Pears, intuits Britten's inner conflicts like Bostridge does.  His voice seems to hover, suggesting cryptic nuances beneath the surface. His voice curls and twists, slithering along the arch, stylized lines, so the sharp, crisp consonants cut into the legato. Diction as drama. This duality expresses the quirkiness of Britten's way of disguising emotion behind studied reserve.

Britten's female characters aren't often particularly feminine, but Angelika Kirchschlager brings out Lucretia's vulnerability so well that the horror of what happens to her is heart-rending. Kathleen Ferrier's Lucretia created the mould, but Ferrier's personal vulnerabilities were never far from the surface. She was statuesque but not a statue. Kirchschlager doesn't look quite so imposing, but she expresses her emotional strength with a combination of gentleness and firm modulation.  She feels like a real woman, in contrast with the male-oriented power politics of the world around her. Kirchschlager's Lucretia is an uncommonly prescient understanding of Britten's psyche.

Non-staging concentrates minds on the music, which in Britten is so much a part of the drama that it's clear why he didn't worry too much about writing symphonies per se. In his opera, the orchestra functions as part of the narrative. Male, female and orchestral choruses, one might say.  Excellently focussed,  Claire Booth in fine form as Lucia; Hilary Summers not at her best, but still better than many.  Christopher Purves sang Collatinus, Benjamin Russell Junius and Peter Coleman-Wright Tarquinius. When Christopher Maltman did the role ten years ago, he did it naked. Marvellous sexual malevolence, like a wild animal.  Coleman-Wright instead develops Tarquinius's inner animal, for his Etruscan origins make him an outsider in the competitive, macho world of new Rome.

This production moves on the Holland Festival in Amsterdam next week, and then on to the Grand Théatre de Luxembourg. It was also as being recorded, so let's hope it's released on CD, as well as the broadcast on Radio 3.  This performance is a landmark in Britten interpretation, so it needs to be heard.  Longer review to come when I can use 2 windows at once.
PS !!! A reader just told me that there is a very rare recording on Amazon - Britten's Rape of Lucrezia Borgia ! Sure enough, click on the link. Imagine.....
at June 12, 2011

The CD has now been released by Virgin. Very much worth a listen!